Bell describes two spaceships that start out at rest relative to each other, with an elastic string between them, one end attached to each ship, which is initially just long enough to span the distance between the ships without being stretched.

The ships’ clocks are synchronized in their common initial rest frame K. At some time t by their clocks, both of them turn on their rockets and start accelerating in the positive x direction, with exactly the same constant proper acceleration (meaning that the crew of each ship feels the same constant acceleration). What happens to the string?

The correct answer is that, as the ships accelerate, the string is stretched more and more until it breaks. The “paradox” arises from the following (erroneous) line of argument: since both ships start accelerating at the same time, and they both have exactly the same acceleration, the distance between them should remain constant, so how can the string be stretched and break?

Of course, in relativity, whenever you see an argument using the terms “time” and “distance,” you know you need to be careful, since time and distance are frame-dependent. To resolve the “paradox,” we look at the distance between the ships, as seen from the instantaneous rest frame K’ of either ship. If you do this at different points along either ship’s worldline, you will see that the distance gradually increases, e.g., L2>L1 for the two lengths shown in the figure, as measured on the respective graph-paper grids. These lengths are measured parallel to the spacelike axes of frames K and K’, so that they are distances between events that are simultaneous as measured in these frames. Since the string remains attached to both ships, increasing distance between the ships in either ship’s instantaneous rest frame means the string has to stretch (and eventually it will stretch enough to break). 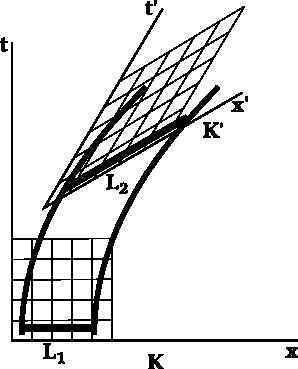 Some treatments of the paradox attribute the breaking of the string to “length contraction,” and you may be wondering how that comes into play, since the discussion so far has not mentioned it. In the article by John Bell in which he originally introduced the paradox, he gave an alternate line of reasoning to get the correct answer. The ships and the string are originally set up at rest relative to one another, with the string unstressed. As the ships accelerate, the string moves faster and faster relative to frame K, so its “natural” (i.e., unstressed) length, as measured in K, gets shorter and shorter due to length contraction. But its actual length as measured in K does stay the same, so the string will be increasingly stretched until it breaks. (It may be helpful to consider the case where an additional, identical string is attached only to the front spaceship. As the ships accelerate, it retains its original length, as measured in its own rest frame, and is therefore too short to span the increased distance between the ships. The shorter line marked L/γ in the diagram below can be thought of as representing this second string.) 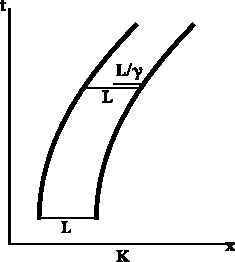 http://www.lightandmatter.com/sr/ (original source for diagrams, somewhat modified for this FAQ)

The following forum members contributed to this FAQ:

Struggles with the Continuum: Spacetime Conclusion

What is relativistic mass and why it is not used much?

Struggles With the Continuum: Point Particles and the Electromagnetic Field