It is no secret to anyone who has read my posts in this forum for a while that I do not like Wikipedia. I think that there’s a fundamental flaw with the whole concept and philosophy of it. While I think that it may be useful to many who need a quick lookup for something, it is unfortunate that even more are using it almost as their primary source of information. And this is scary considering that (i) the validity of the information being presented is never guaranteed and (ii) the pedagogical presentation of the material is often shoddy, making the subject even more confusing.

I often get asked to look at such-and-such Wikipedia entry, or someone is trying to convince me of something and using a Wikipedia entry as a “reference” to back up his/her argument. It is usually during such instances that I find inaccuracies, confusing statements, and outright errors in such entries. I was doing my own search on something a few minutes ago, and I decided, out of curiosity, to see what Wikipedia has to say about “Work Function”. Now, keep in mind that this is a common terminology, especially for physics students, since the photoelectric effect is a “must-know” topic for these students. One would think that this should be a topic that a Wikipedia entry would get it right, considering how many people would look up such a thing, AND, the fact that errors and inaccuracy would, by now, be ironed out.

This is what I first saw on the Wikipedia page Oct. 8, and my last check today shows that it is still there. 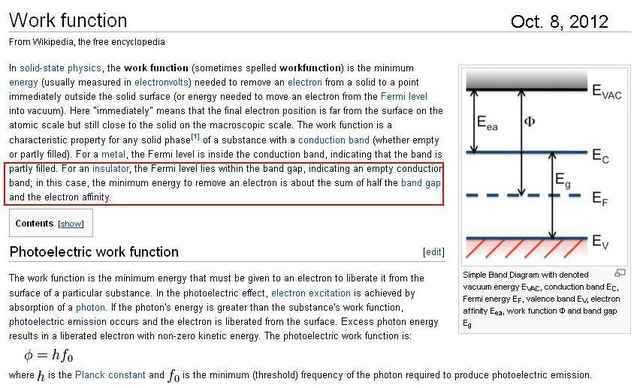 I posted the date in the screen capture as a date stamp on when this was first viewed.

The offending passage has been highlighted with a red box. Let’s look at it closely, shall we?

The description here is on what happened for an insulator (or a semiconductor, for that matter). The figure shown is the simplified band diagram for such a system (i.e. an intrinsic semiconductor, for example), and defines the various quantities such as the work function, bandgap, electron affinity, etc. The problematic statement says this:

For an insulator, the Fermi level lies within the band gap, indicating an empty conduction band; in this case, the minimum energy to remove an electron is about the sum of half the band gap and the electron affinity.

The first part of that paragraph which says “…. For an insulator, the Fermi level lies within the bandgap, indicating an empty conduction band …” is OK. However, the second part is very puzzling and an outright error: “… in this case, the minimum energy to remove an electron is about the sum of half the bandgap and the electron affinity …”

Whoever wrote this is STILL thinking that the work function (Phi) is still the minimum energy needed to produce photoemission, as in the case of a metal. This is FALSE, and anyone who looks at the band diagram can tell. Half of the bandgap plus the electron affinity is the work function Phi, but this is the energy between the vacuum level and the Fermi level. The Fermi level for insulator/semiconductor has NO STATES, and thus, no electrons to excite! After all, it resides in the bandgap! So what is being excited here?

For an insulator/semiconductor, while the work function may still be defined as the energy between the Fermi level and the vacuum level, it no longer corresponds to the photoemission threshold! The photoemission threshold now is the full band gap energy PLUS the electron affinity. You need to excite, at the minimum, the electrons from the top of the valence band to the vacuum level. One can see this clearly by looking at the band diagram in the figure.

Now, you can tell me “But ZapperZ, why can’t you correct these errors, and provide a service to the community?” You will then have missed my point entirely. My problem isn’t with these errors. My problem is the WHOLE PHILOSOPHY of Wikipedia. I find that to be the fundamental flaw, that no one of any authority is being given the ability to write and edit stuff. The errors in the various entries are only the SYMPTOMS of the flawed philosophy. I could spend a lifetime correcting many of these errors (now why would I want to spend a lot of my own personal time to do that in the first place, no one has given me a good reason), and it would not change a thing about my perception of Wikipedia.

If you don’t know the topic you are looking up, and you are using Wikipedia as your PRIMARY SOURCE OF INFORMATION, I would be very scared if I were you.

A Guide to Going Back to School For Math or Science

Am I Cut Out for Mathematics or Sciences?

The Most Important Thing You Can Learn from Physics Forums

What are Alternative Careers for a Physics Graduate