Less often, people ask about potential applications of anti-matter. Both of those questions can be 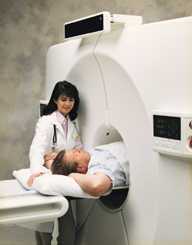 Positrons were first theorized by Paul Dirac in 1928 when he realized that his equation describing the electron admitted solutions for particles with positive as well as negative charges. They were observed four years later by Carl Anderson. Between the 1950s and the 1980s, the technology was developed to use positrons for medical diagnostics.

The word tomography is often not heard outside of medical imaging, it refers to an image being reconstructed by adding together many individual slices. It is from the same Greek word as atom, a-tomos being unsliceable.

This is roughly how PET works:

The radioactive isotope Fluorine-18 is produced in a particle accelerator by colliding a proton beam (with an energy of about a millionth that of the LHC) into water containing Oxygen-18. It is incorporated using chemistry in a glucose molecule called fludeoxyglucose (FDG). That is administered to a person, who is made of trillions of glucose combustion machines. As the glucose is spread through the body and metabolized, the fluorine decays (it has a half-life of just under two hours), emitting a positron. The positron quickly finds an electron, usually within two millimeters (there tend to be a lot of them inside things made of atoms), and annihilates, releasing two gamma photons with an energy of roughly 511 keV (the mass of an electron, times c##^2##). Because momentum is conserved, they fly off in opposite directions. 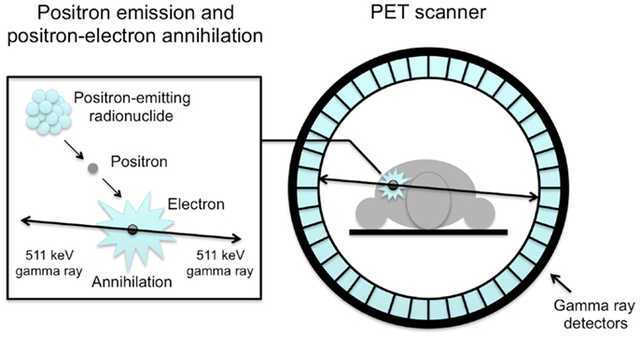 Now ideally, the person is lying stationary inside a ring of gamma detectors. The two photons are detected at two different locations around the ring, and the line connecting these tells you the axis on which they propagated. The difference in arrival time between the two photons tells you where along that axis they originated: light travels at roughly one foot per nanosecond, so if they originated six inches off-center, there would be a one nanosecond delay between the two detections. This information lets you pinpoint where in the body the annihilation took place. In practice, time resolution may not be sufficient for this level of pinpointing, but multiple measurements of coincident photons allow for triangulation.

Over time, enough events are detected to reconstruct an image. What we see when we look at a PET scan is essentially a map of where glucose is being metabolized in the body. The patient is relaxed in the scanner, so the muscles are not too active, but the brain is constantly churning. The bladder lights up because that’s where the stuff in our body tends to end up. But importantly, tumors are sites of high metabolism, and they light up under PET, and can be seen, diagnosed, and tracked.

A 3D scan of a PET scan, from Wikipedia. The brain and bladder are clearly visible, as are some abdominal tumors. Consult an actual radiologist to interpret a PET scan, not a physics website.

What started as a theoretical physics investigation lead to a medical diagnostic technology for over half a century. Will the discovery of the Higgs boson or gravitational radiation lead to similar advances in technology? If I were a gambling man I would say no, but I don’t know what the future holds in store.

How to Become a Medical Physicist in 3653 Easy Steps

How to Self Study Geometry for Students
Scroll to top