What causes cancer?  For the most part, cancer is a disease that arises from mutations in the body that accumulate over time.  These mutations knock out key tumor suppressor genes involved in repairing DNA or regulating cell division and activate oncogenes that can drive cells to divide uncontrollably and invade other tissues.  But where do these cancer-driving mutations come from?  Some of these mutations we inherit from our parents, some come about from environmental factors that cause mutations (such as smoking, exposure to UV and other ionizing radiation, or exposure to carcinogenic substances), and some just naturally arise during the process of cell division.

Many cancer researchers are interested in knowing the fraction of cancers that are attributable to each of these sources as this information helps inform what we think about cancer prevention. If most cancer-causing mutations arise naturally during cell division, the so-called “bad luck” theory, then it seems like there is little we can do to prevent these cancers.  However, if they arise due to environmental factors, then cancers are due to “bad lifestyles,” and individuals can reduce their cancer risk by adopting healthier lifestyles.

Earlier this year, a paper in Science made a big splash in this field by claiming that about two-thirds of cancers are due to “bad luck” (we previously discussed this study in this Physics Forums thread).  Here’s the abstract for the study:

Some tissue types give rise to human cancers millions of times more often than other tissue types. Although this has been recognized for more than a century, it has never been explained. Here, we show that the lifetime risk of cancers of many different types is strongly correlated (0.81) with the total number of divisions of the normal self-renewing cells maintaining that tissue’s homeostasis. These results suggest that only a third of the variation in cancer risk among tissues is attributable to environmental factors or inherited predispositions. The majority is due to “bad luck,” that is, random mutations arising during DNA replication in normal, noncancerous stem cells. This is important not only for understanding the disease but also for designing strategies to limit the mortality it causes.

The authors based their argument on the fact that the lifetime risk of developing cancer in a particular tissue varies with the number of cell divisions stem cells from that tissue undergo: 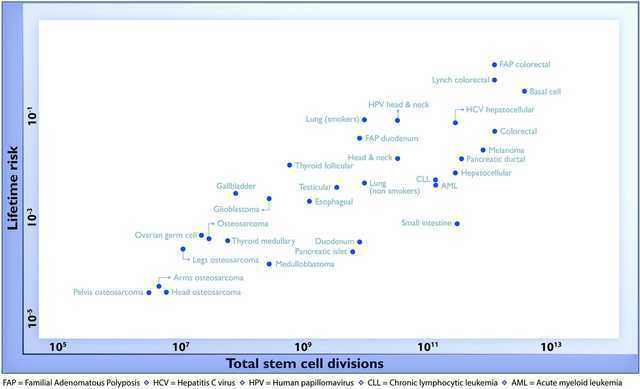 These data make a lot of sense: osteosarcomas (bone cancers, in the bottom left of the diagram) are rare because bone cells divide infrequently, and thus have fewer opportunities to accumulate mutations over one’s lifetime.  Other tissues that divide more frequently have a higher chance of accumulating mutations (e.g. as is the case in colorectal cancer at the top right of the diagram).  The fact that many of the data points lie near a straight line suggests that the accumulation of mutations during cell division explains most cancer cases (about two thirds of cancer cases, according to the study).

However, not everyone agreed with the conclusions of the study and it drew much criticism from a number of cancer researchers. Now, a new study published this week in Nature challenges the findings of the Science paper, instead claiming that the majority of cancers risk is driven by extrinsic factors (e.g. environmental factors) rather than intrinsic factors (the baseline mutation rate associated with DNA replication):

Recent research has highlighted a strong correlation between tissue-specific cancer risk and the lifetime number of tissue-specific stem-cell divisions. Whether such correlation implies a high unavoidable intrinsic cancer risk has become a key public health debate with the dissemination of the ‘bad luck’ hypothesis. Here we provide evidence that intrinsic risk factors contribute only modestly (less than ~10–30% of lifetime risk) to cancer development. First, we demonstrate that the correlation between stem-cell division and cancer risk does not distinguish between the effects of intrinsic and extrinsic factors. We then show that intrinsic risk is better estimated by the lower bound risk controlling for total stem-cell divisions. Finally, we show that the rates of endogenous mutation accumulation by intrinsic processes are not sufficient to account for the observed cancer risks. Collectively, we conclude that cancer risk is heavily influenced by extrinsic factors. These results are important for strategizing cancer prevention, research, and public health.

The authors base their arguments on numerous lines of evidence:

Based on these arguments, the authors re-interpret the scatter-plot from above.  They say that the Science paper was unable to see the effect of the extrinsic factors because most of the cancers were affected by the extrinsic factors.  Rather, only a small number of cells develop cancer at the intrinsic rate (colored red in the figure below), and the majority of the other cancers have lifetime risks that lie well above the intrinsic risk line: 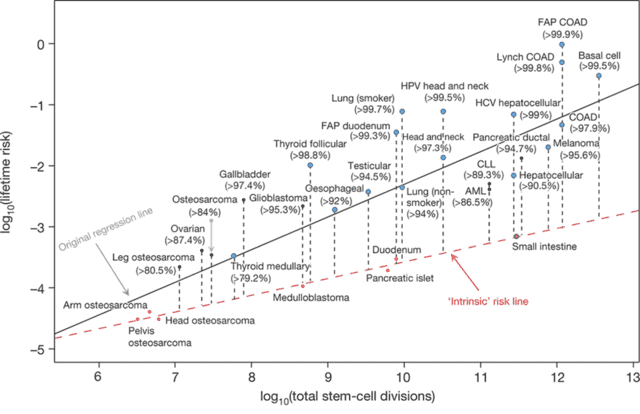 Overall, this new study is a well-written paper that layers additional nuance and insight onto the initial Science study.  The work is important as it suggests that extrinsic factors play a huge role in determining the incidence of cancer, meaning that we should be able to prevent many cancers by limiting our exposure to these extrinsic risk factors.  Other epidemiological studies, such as work compiled by Cancer Research UK, have suggested ~40% of cancers are preventable by changes in lifestyle, which is somewhere between the estimates of the Science paper (30%) and the Nature paper (70-90%).  However, not all extrinsic risk factors are preventable (e.g. it’s not practical to avoid sunlight) and certainly not are all known.  So, the conclusion that 70-90% are due to extrinsic factors likely overestimates the fraction of cancers that are preventable.

Still, the conclusion should encourage doctors and those interested in public health.  Most cancers are not unavoidably due to bad luck;  rather, many cancers are due to bad lifestyle choices, and these choices are something that is under our control.  If you want to reduce your risk of cancer, making changes to your lifestyle—like not smoking, keeping physically active, moderating alcohol intake, and eating at least five portions of fruits and vegetables per day—can reduce your risk of most cancers and, on average, give you fourteen more years of life.  This work should stimulate further work to better identify the extrinsic risk factors driving various types of cancers so that more people can learn how to live long, healthy, cancer-free lives.

Learn the Amazing New Research on Untying Knots in Polymers

When Science is Not Enough: Legal and Health Implications of Questions
23 replies

Ice Quiz: All About Ice Trivia
Scroll to top