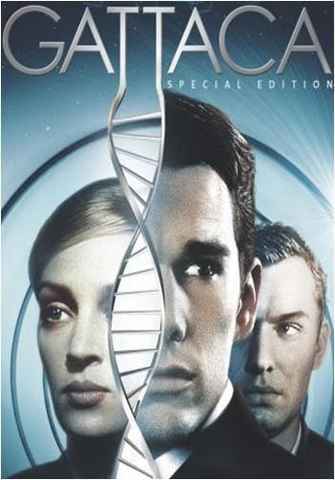 The prospect of designer babies has been a staple of the dystopian futures imagined by science-fiction writers, evoking fears of eugenics (e.g. Brave New World) or social inequality (e.g. Gattaca). However, new advances in gene editing technologies, in particular, the discovery of the CRISPR-Cas9 system, are bringing this piece of science fiction closer to reality. Last week, researchers published the first study demonstrating gene editing in human embryos. More studies are likely to come as universities and companies around the world pursue the same goal for a variety of scientific and clinical applications. Despite calls from some in the scientific community to place a moratorium on gene editing in embryos, such a moratorium would be difficult to enforce worldwide. What are the capabilities of this new technology and what might it hold for our future? In this Insight, I will address these questions by discussing the science behind gene editing, its limitations, and the future of gene editing in the clinic.

How to edit a gene

The principle behind targeted gene editing is fairly straightforward. If you create a double-stranded break in DNA, this break can be repaired in one of two ways (see the diagram below). One way, called nonhomologous end-joining, involves stitching the two broken pieces of DNA together, often creating a mutation at the site where the DNAs are rejoined. Therefore, if you make a cut inside a protein-coding DNA sequence, more often than not, you’ll introduce a mutation that will knock out the function of that gene. The second way in which the cell can repair a double-stranded break is a process called homology-directed repair. Here, the repair machinery makes use of the fact that we carry two copies of our genome, one which we inherit from our father and one which we inherit from our mother. The machinery searches out the matching DNA sequence on the undamaged copy of the chromosome (the homologous chromosome), then copies that sequence onto the damaged chromosome. For genome engineering purposes, we can trick the cell by adding in a foreign DNA molecule that looks similar to the region that we cut. Instead of grabbing the homologous chromosome, the repair machinery will grab the foreign DNA and copy that (along with whichever transgenic sequences we want to add into the genome) onto the damaged chromosome. So all you need to do to edit a gene is find a way to cut the genome at a specific sequence, and the cell’s DNA repair machinery will take care of the rest for you. 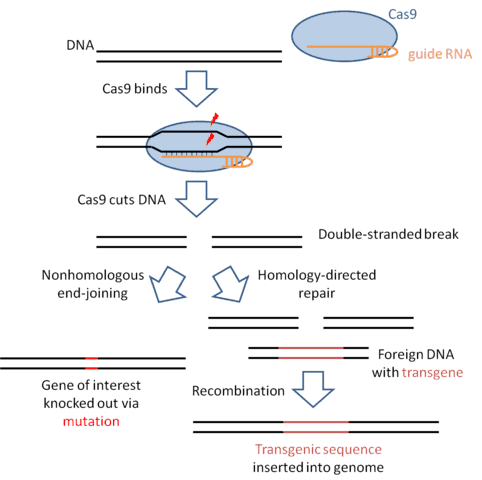 If the principle behind gene editing is so simple, why wasn’t it done earlier? The bottleneck in the process has been finding a general method to cut the DNA at a specified sequence. Early efforts in this area involved engineering proteins to recognize specific DNA sequences, but this process turned out to be fairly difficult, often requiring a few rounds of testing and redesign to get a protein that targets the right sequence. Thus, anytime you wanted to target a new DNA sequence you’d have to begin a laborious effort to design a new protein. The discovery of the CRISPR-Cas9 system changed all of that. This system, which comes from the antiviral defense mechanisms used by bacteria, consists of two parts: the Cas9 protein which houses the enzyme active site that cuts the DNA, and a guide RNA (in bacteria, this RNA comes from a region of the genome containing clustered regularly interspaced short palindromic repeats, hence the acronym CRISPR). The guide RNA contains a 20 bp guide sequence that tells Cas9 which sequence to cut. Because the guide sequence works through simple Watson-Crick base pairing, designing a new cutting enzyme is simple and requires changing only the 20 bp guide sequence (as well as making sure that the target sequence contains a small sequence motif recognized by the Cas9 protein). The ease with which Cas9 can be targeted to any arbitrary sequence makes CRISPR-mediated gene editing available to anyone with reasonable training in molecular biology.

The limitations of gene editing

So now that we can edit the human genome at will, super-intelligent babies must be just around the corner, right? Unfortunately, the genetics of many traits that we care about are quite complex and difficult to manipulate. Take the genetics of human height, for example. We know from previous studies that genetics explains ~ 80% of the variation in height among individuals, with environmental effects (differing diets, etc.) accounting for the other 20%. Furthermore, researchers have identified many of the genes responsible for determining an individual’s height. The problem, however, is that each of these genes individually has a tiny effect on height. For example, it takes the combined effect of ~700 genetic variants to account for ~20% of the variation in human height. So unless you’re editing hundreds to thousands of genes at a time, you’ll only minutely affect the chance of your baby being tall. This is likely true for other complex traits, like intelligence.

This discussion, of course, presupposes that we understand which changes we’d like to make to the genome. The studies above that identified the thousands of genes that influence human height were found in so-called genome-wide association studies (GWAS). The keyword here is association: these studies identified genetic variants associated with human height, but the studies cannot determine whether the variants are causing the differences in human height. Many of these variants probably do not influence human height themselves, but instead, co-segregate with a nearby variant that influences human height. Unfortunately, knowing how to edit genomes does not mean we know what to edit.

Of course, there are examples of traits whose genetics is much simpler. Many genetic disorders, such as sickle-cell anemia, cystic fibrosis, and Huntington’s disease, are caused by well-characterized changes to a single gene that we know to be causative of these disorders. Gene editing offers the prospect of repairing the mutations that cause these single-gene disorders. While research is moving forward to use CRISPR to treat individuals with genetic disorders, gene editing is not required if the goal is to engineer embryos free from genetic disorders. In most cases, doctors can instead sequence the DNA from embryos in order to determine which embryos would have a genetic disorder and which would produce healthy children. The doctors can then use only the healthy embryos for in vitro fertilization. Sequencing and screening embryos, called preimplantation genetic diagnosis, is a much easier, safer, and cheaper method than using gene editing to achieve the same goal.

Are there any useful applications of gene editing in embryos? It turns out that there are a few rare cases of beneficial traits conferred largely by a single gene. For example, researchers have identified individuals who lack functional copies of the gene PCSK9, a gene involved in cholesterol metabolism, who are perfectly normal except that they have unusually low amounts of bad cholesterol, suggesting that they are at lower risk for cardiovascular disease. Individuals who carry mutations in the CCR5 protein, one of the co-receptors for HIV, are immune to HIV infection. A particular mutation in the APP protein, the protein that forms plaques in the brains of those with Alzheimer’s disease, lowers one’s risk of Alzheimer’s disease.  Gene editing offers the ability to introduce these rare mutations into embryos to lower their lifetime risk of cardiovascular disease or Alzheimer’s or confer resistance to HIV infection. Of course, the standard of safety for these types of modifications is much higher than in therapeutic applications: For therapies that intend to fix a genetic disorder, side effects from the procedure are tolerable as long as they are not worse than the disease they’re curing. For therapies intended to treat asymptomatic individuals, even mild side effects can skew the cost-benefit ratio.

So far, the list of such beneficial traits is small, but as full genome sequencing becomes more commonplace, perhaps we will identify more beneficial single-gene traits. Ultimately, it is our ability to finds such traits that will limit the possibilities of gene editing to create genetically enhanced humans.

Are we headed for a brave new world?

So, what does this new technology mean for the future of medicine? CRISPR will continue to be an important tool for biomedical research, allowing researchers to more easily generate new cell lines or animal models to study human disease. For use in the clinic, either for gene therapy in individuals with genetic disorders or for the modification of embryos, CRISPR and other gene-editing technologies still face many challenges regarding their safety and efficacy. For example, CRISPR cuts fairly efficiently at its target sequence, but it can also cut at “off-target” sites, introducing unwanted mutations elsewhere in the genome. Figuring out how to reduce off-target effects is a must before CRISPR enters the clinic. Even if these issues are resolved, however, we lack the necessary information to know a priori the effects of most genetic changes we introduce, so research must proceed with caution. Without more fundamental breakthroughs in our understanding of biology, we have only a limited capacity to genetically enhance embryos, so CRISPR will not lead to a Gattaca-like world with a genetically engineered upper class, ruling over a non-engineered lower class anytime soon.  Hopefully, CRISPR will instead find its first clinical uses in therapeutic applications like helping those with genetic diseases or engineering immune cells to help fight HIV or cancer.

Want to Tell One Wood from Another? Learn Basic Wood Anatomy

What Is Evolution and How Does It Happen?