[1*] Quibble regarding the solution.

[3*] Alternative solution should be accepted

“If Jackie moves more quickly, the force of Object 1 on Object 2 is larger and can exceed the maximum force due to static friction. When this happens Object 2 moves, and the frictional force will continue to oppose relative motion between Object 2 and the ground. “

The chairs are on wheels. References to static friction should be instead of static rolling resistance.

The graphs under Solution are not quite right. From “Jackie starts leaning backwards” to the subsequent horizontal line, kinetic rolling resistance causes an acceleration, so the lines should be curved.

Why? In soap bubbles, it goes down as the bubble grows.

For a rubber balloon, equation 6 at https://www.researchgate.net/publication/252385230_The_pressure_curve_for_a_rubber_balloon gives the internal gauge pressure as asymptotically inversely proportional to r.

The solution model is incomplete. It is not possible for only blocks 2 and 4 to move.

In any valid model, the kinetic energy required for a given speed is at least double that allowed in the solution.

“Chocolate and plain milk might mix: any mixing will dissipate the kinetic energy “

This seems to confuse two things. Turbulence (mentioned further down the list) will dissipate KE, but that is not restricted to the mixing of the two fluids. Mixing will reduce the change in GPE, making it less available for KE.

Identify two ways in which changing the droplet size would affect the amount that light scatters.

The word “would” is a problem. It turns out from the answer that it might not affect the scattering after all – maybe they cancel. At best, it can only do one or the other. If the student figures out which effect wins, he or she will think it wrong to list the other.

For small depressions of the trampoline, the force in the springs varies as the square of the depression, so the curve ought to have zero gradients at the origin.

The illustration is wrong.

The graph should be curved even for an ideal trampoline. Indeed, whereas part c) concerned the force in the springs, which varies as y2, this part concerns the force on the trampolinist, and for small y that varies as y3.

Thus, the illustration should show two cubic curves, one above the other. They should meet at the origin, but not at the left-hand end. 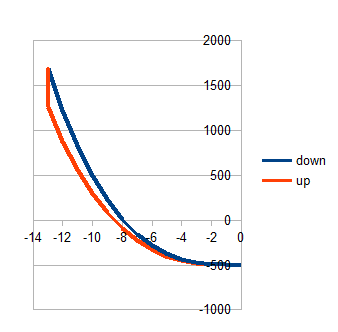 “Solution: There is a larger force upward when moving down than up, as then the kinetic energy will be lower after the bounce.”

I can make no sense of the explanation. The force is less when moving up because of energy losses in the springs.

“a bolt breaks loose and drops from the ceiling”

Presumably, the bolt was subjected to some stress, so one should be forgiven for supposing it comes away with some speed. Maybe clearer as “a bolt works loose“.

Better worded as “In the plane of the slope“.

The diagram should show Josh standing vertically (or he would simply topple).

“However, there is always a component of the gravitational force which is downhill, and his skis remain in the same direction. This means that there is an angle between directly downhill and the direction in which his skis point where the total force is in the direction of motion“

Students with practical experience of skiing are unlikely to arrive at the official answer.

“a. using a screwdriver with a fat handle and pushing down hard while turning to increase the grip. “

“To the nearest order of magnitude “

Should students at this level be expected to be aware that, in terms of order of magnitude, 4 should be considered nearer to 10 than to 1?

“Hence, the mass of half a teaspoon of cinnamon is less than 2 g but more than 0.2 g, leaving 1 g as the most sensible estimate “

The solution reasoning accepts that the student might validly estimate the mass as 0.3g, yet rejects 0.1g as the nearest order of magnitude.

Nonsense. The net force on the object is the centripetal force, so the sum of forces perpendicular to the surface is nonzero.

There is no net vertical force, so FN sinθ = Fg.

Indeed, this is shown correctly in the drawing for the solution in part iii).

“As it moves down the cone, the radius of the cone decreases. “

Only when it reaches some lower height can it become smaller than previously.

“The centripetal force is courtesy of the horizontal component of the normal force, the magnitude of which stays constant as it does not depend on h or r “

That is a bizarre line of reasoning. The centripetal force is whatever it needs to be to keep the object following the curvature. If that changes then the normal force changes.

As noted above, the immediate consequence of the nudge will be a reduction in centripetal and normal force. As the object descends it will gain speed and experience a smaller radius of curvature, leading to an increased normal force.

That the object will follow an undulating path is intuitively correct, but the arguments offered in the solution do not demonstrate this. Rather, one needs to show that if the height variable is z and the initial height is z0 then z-z0 and ##\ddot z## have opposite signs.

Indeed, it turns out that ##\ddot z\propto z^{-3}-z_0^{-3}##, so for small perturbations it follows SHM, but I do not see a sufficiently simple line of reasoning for the education level expected.

No, it makes no sense if we take the graph at the start of the question at face value. Why isn’t the inside temperature asymptotically equal to the outside temperature?

If the data are taken from a practical experiment, maybe there were other rooms in the building, perhaps maintained at a bit above Ti, or having a lot of thermal inertia.

This confusion could easily have been avoided by omitting the outside temperature line. It plays no part in the question.

It should be made clear that this is the largest over all possible values of x1, i.e. the expression should only involve the other given values.

Interestingly, the solution to Q12 in the 2007 paper gets this right.

To avoid this complication, specify a smooth section before the second spring.

“Here momentum is conserved but energy is not because the blobs are gunky rather than hard. “

The wording confuses elasticity with rigidity. Concrete blocks are hard but do not bounce well off each other.

The location of the net normal force in the answer diagram is incorrect. It assumes the normal force is distributed uniformly over the base.

Since there are only three forces, mg, friction, and the normal force, and the system is in equilibrium, the three should pass through a common point.

The two forces acting on the monocle are gravity and the pull from the chain. The chain will not be quite horizontal, so does not act towards the center of the circle.

Since the student is only asked which of the listed forces acts, a valid answer would therefore be a), “I only”.

Probably just a typo, but the solution concludes:

“thus the cylindrical flask should exert less total force than its counterpart. “

whereas everything to that point would lead to the opposite conclusion.

The span of measurements is a demonstrably incorrect way to estimate the error in the average of samples. As the number of trials increases, we should expect the span of the measurements to tend to increase, but the uncertainty of the mean to decrease.

“Ben’s method requires that the voltage output be directly proportional to the intensity, which it is not.”

It is unclear on what basis it is determined that the voltage output is not directly proportional to the intensity. The graph of voltage against angle is nonlinear, but that is not the point.

To complete the argument, the graph shown should be compared to one of cos2(θ).  The difference in nature is clear near ##\theta=\frac{\pi}2##.

The solution diagram is incorrect. Anyone familiar with Hadley cells would know that there are three circulation bands in each hemisphere. (In principle, a planet can have any odd number in each.) The mid-latitude band flows towards the pole at ground level. This accounts for the Westerly winds at mid-latitudes.

It also incorrectly shows strong Easterlies at the equator. As noted in the answer to part c), the equator is the location of the Doldrums.

Clearly, it does. The v in F = mΩv sin θ is the longitudinal component only. More generally, the force is given by ##2m \vec \Omega \times \vec v ## where ##\vec \Omega## is the rotation vector of the Earth and ##\vec v## is the velocity relative to the Earth’s surface. This means that the latitudinal component of ##\vec v## leads to a force directed away from Earth’s axis.

“Why does the boy end up further underwater in this case? Solution: When the boy blows fast upwards, he is imparting a greater force to the air”

An alternative (and more reasonable?) explanation is that the relatively sudden reduction in buoyancy leads to a significant downward acceleration. The boy continues to sink because of the acquired momentum. When exhaling slowly, the momentum gets dissipated.

“The hairbrush is not a good approximation to a point mass, because it is likely to swing in other dimensions“

It depends where on the brush the ribbon is tied. If at the mass center, any rotation of the brush itself is unrelated to its action as a pendulum bob.

“The use of someone’s hand as the pivot point is likely to introduce error.”

True, and another way is that the ribbon will to some extent wrap around the fingers, altering the pendulum length during the swing.

I Know the Math Says so, but Is It Really True?

How to Self Study Analysis: Intro to Analysis

How to Self Study Abstract Algebra

How to Self Study Intermediate Analysis Math

How to Self Study Linear Algebra for Students
3 replies

Intro to Physically Reasonable Waves on a String
Scroll to top