The terms Bizarro and Bizarro World originated in Superman comics, where strangely imperfect versions of Superman, other action characters, and even Earth itself were conceived of, and provided the basis of stories.  And who can ever forget the Seinfeld episode entitled “Bizarro Jerry,” in which there are Bizarro versions of Jerry and all his friends?   But, unlike his group, the Bizarro versions are strangely nice, polite, and not self-centered.

In popular culture, Bizarro has come to mean an imperfectly flawed version of something else.  So I thought it might be fun to conceptually envision a Bizarro version of our own universe.  I also felt that we might gain some additional insight into the fundamental characteristics of our own universe by studying the Bizzaro universe.

Characteristics of the Bizzaro Universe

I should also mention that the Bizzaro Universe is, in essence,   equivalent to the “loaf of bread” arrangement described in Brian Greene’s book, “The Elegant Universe.”  However, for whatever reason, Greene fails to make any distinction between his Euclidean loaf-of-bread description and our actual non-Euclidean universe.

The geometry of Bizzaro Universe

In the Bizzaro Universe, as with our own universe, we refer to events as points in space-time with coordinates (ct, x, y, z), although, in the Bizzaro universe, the coordinate ct is an actual spatial coordinate.  Let ##\mathbf{s}## represent a 4D position vector drawn from an arbitrary origin in Bizzaro space-time to an event (ct, x, y, z).  Since Bizzaro spacetime is Euclidean, we can represent this position vector in terms of Cartesian unit vectors by the equation:  $$\mathbf{s}=(ct)\mathbf{i_t}+x\mathbf{i_x}+y\mathbf{i_y}+z\mathbf{i_z}\tag{4}$$where ##\mathbf{i_t}## is the unit vector in the time direction.  (Note that, in all this, we are referring to the Cartesian coordinates of events, as referenced from an arbitrarily selected origin in 4D Bizzaro spacetime.)

Eqns. 9 apply irrespective of the relative 3D velocities of the S and S’ frames of reference, or the rotational and translational offsets of the two coordinate systems.

The residents of the Bizarro universe are analogous to 2-dimensional beings trapped within a flat plane that is immersed in 3D space.  They have no access to the 3rd dimension, except for the 2D cross-section that they currently occupy.  This 2D cross-section may not be stationary in 3D space; it may be moving forward (unbeknownst to them) into the 3rd (time) dimension.  If so, as time progresses, they would be sweeping out all of 3D space, and would ultimately be able to sample all of 3D space with their planar cross-section.  However, at any one instant of time (according to their synchronized set of clocks), they would only have access to a single planar slice out of 3D space.

This is totally analogous to what the 3D beings of the Bizzaro Universe are actually experiencing in their 4D spacetime.   In their rest frame of reference, they are trapped within a specific 3D slice out of 4D spacetime.  This 3D slice is unique to the particular reference frame they occupy (i.e., their rest frame).  They have no access or vision into the 4th dimension, except for this 3D cut.  The cut is not stationary; it is moving forward (unbeknownst to them) into their own 4th (time) spatial dimension.  As time (measured by the synchronized clocks in their 3D reference frame) progresses, they are sweeping out all of 4D spacetime, and will ultimately be able to sample all of the 4D spacetime (at least the part into their future) with their moving 3D cut.  However, at any one instant of time, they only have access to their single 3D cut-out of 4D spacetime (a 3D panoramic snapshot).  Finally, different frames of reference in relative motion possess different 3D cuts and different time directions perpendicular to these 3D cuts.

Arguably, the most important equation in the present development is Eqn. 9a, providing a relationship for a differential position vector in Bizzaro spacetime, as reckoned from the coordinate systems that are employed in two different frames of reference, S and S’:$$\mathbf{ds}=(cdt)\mathbf{i_t}+(dx)\mathbf{i_x}+(dy)\mathbf{i_y}+(dz)\mathbf{i_z}$$

Eqn. 14 contains lots of valuable new information concerning the basic nature of 4D Bizzaro spacetime and the kinematics of motion.  Since ##\mathbf{ds}## represents a differential displacement vector, it would appear (according to the right-hand side of this equation) that, even though the particle under consideration is at rest within the S’ frame of reference, it is not truly at rest in Bizzaro spacetime; it is actually covering distance into the 4th (time) dimension t’ with a speed equal to the speed of light c.  In fact, all objects that appear to be at rest within the S’ frame of reference, as well as the S’ frame of reference itself, are actually moving in the t’ direction at this speed.

The beings of the Bizzaro Universe might think to themselves, “how can we, as objects in the Bizzaro Universe, be traveling through spacetime at the speed of light, and yet not be aware that this motion is taking place?”  The answer is that they are all trapped within their own 3D slice out of 4D spacetime (i.e., their own rest frame of reference), and they cannot see into their time dimension.  Furthermore, any objects that are at rest (or nearly at rest) in close proximity to them are each traveling at virtually the exact same velocity as they are; therefore, they don’t sense any relative movement on the order of the speed of light. Finally, the ride is very smooth, since there are no bumps in the road.

The present results apply not only to objects moving at constant speed relative to inertial frames of reference.  They also apply to objects that may be accelerating.  One simply regards the instantaneous 4D absolute Bizzaro velocity of an accelerating object is equal to that of an inertial reference frame moving at the same velocity (i.e., a so-called co-moving inertial reference frame).  Thus, the 4D Bizzaro velocities of all objects in the Bizzaro Universe, including objects that are accelerating, have a magnitude equal to the speed of light, but,  for accelerating objects, the orientation of their time arrows (unit vector in time direction) change with the proper time.

Based on these equations, we have sufficient information to represent the motion of the platform and train through Bizarro spacetime schematically, via a spacetime diagram.  Fig. 1 shows the sequence of locations for a 3-car train at proper train clock times ##t_1′<t_2′<t_3’##. 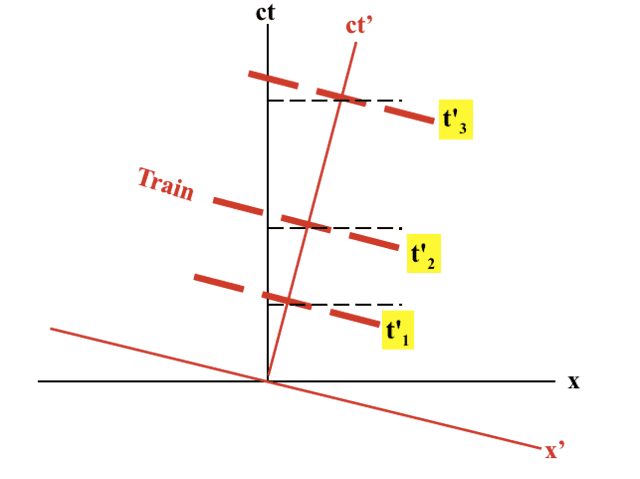 The train is oriented parallel to the x’ axis and is moving at the speed of light (relative to Bizzaro spacetime) in the direction of the ct’ axis.  There is an observer on the train at location x’ = 0 (which corresponds to the center of the middle car).  The team on the platform focuses attention on this train rider and measures his relative speed using their own coordinate grid in the x-direction and their own set of synchronized clocks (displaying the time t which, incidentally, is not “proper train time” for objects at rest in the train).  They obtain $$v=\left(\frac{\partial x}{\partial t}\right)_{x’=0}\tag{16}$$This is the same relationship that would be obtained not only in the Bizzaro Universe but also in the real universe.  The entire train moves with this speed relative to the S reference frame, according to the measurement tools available to the observers in the S (platform) frame of reference.  However, this speed does not properly represent the true x component of the relative velocity vector of the train with respect to the platform in Bizzaro spacetime.  This is because it failed to take into account the difference between the proper train time and the platform clock time.  The actual relative 4 velocities of the train with respect to the platform is obtained by subtracting Eqn. 15 a from Eqn. 15 b, to yield:$$\mathbf{V_T-V_P}=c(\gamma-1)\mathbf{i_t}+\gamma v \mathbf{i_x}\tag{17}$$The component of this relative velocity vector in the t direction is not visible to the observers in the platform reference frame, since t constitutes their inaccessible time direction.  The component in the x-direction has an added factor of ##\gamma## to correct for the difference between the platform clock time t and the train proper time t’.

Fig. 2 is designed to provide some insight into the issues of simultaneity and length contraction (or expansion). 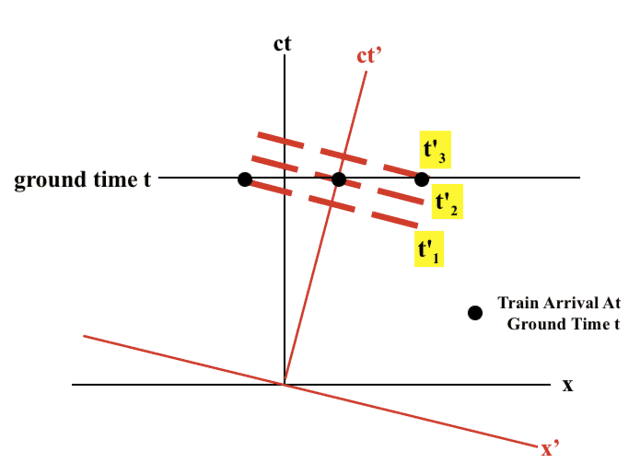 With regard to length change, it appears from Fig. 2 that, in the Bizzaro Universe, the length of the train measured by the platform observers at time t will be greater than the train’s proper length in its rest frame.  This is the opposite of the length contraction effect observed in the real universe.

The final situation to be considered here will be the time dilation (or contraction) effect (Fig. 3). 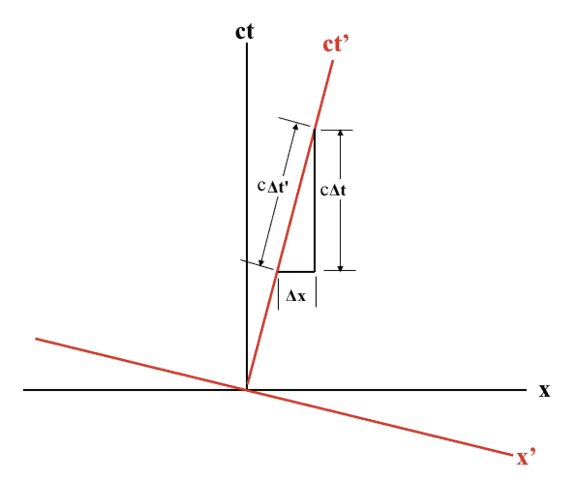 Fig. 3 shows the motion of the train rider situated in the middle of the train (x’=0) as he travels through Bizzaro spacetime.  He passes two observers on the ground at a distance of ##\Delta x## apart, and notes when he passes that the times displayed on their clocks differ by ##\Delta t##.  He compares this with the corresponding time internal on his own clock ##\Delta t’##, and determines that, for Bizzaro spacetime, $$\left(\frac{\Delta t’}{\Delta t}\right)_{x’=const}>1\tag{18}$$ This time expansion is exactly the opposite of the time dilation effect observed in the real universe.

It’s been interesting exploring the geometric and kinematic characteristics of the Euclidean Bizzarro Universe and making comparisons with the corresponding effects observed to take place in our own non-Euclidean universe.  Some of the analogies are enlightening and have provided some new insights and interpretations.  If anyone would be interested in continuing this pursuit, I would be interested in collaborating.  Other topics I would be motivated to analyze would be (1) constant acceleration kinematics, (2) paradoxes such as the pole paradox, and (3) Bizzaro laws of dynamics, such as momentum and energy conservation.

An Introduction to the Traditional Abacus of China and Japan

How to Create a Universe – Instructions for an Apprentice God

What’s Your Most Memorable Textbook?
Scroll to top