Gauss’s law was formulated by Carl Friedrich Gauss in 1835. It is one of the four Maxwell’s equations that form the basis of classical electrodynamics. Gauss’s law plays an important role because it reveals a simple relation between field and particle distribution. In the context of electrostatics, using Gauss’s law can greatly simplify the calculation of electric field given a symmetric charge distribution. Therefore, it is both interesting and significant to look at the derivation of Gauss’s law. Here we will only be looking at the derivation of Gauss’s law applied to an electrostatic field, by showing its relation with Coulomb’s law.

Gauss’s Law can be expressed mathematically in integral form and differential form. They are equivalent and related by divergence theorem.

Gauss’s law is essentially equivalent to Coulomb’s law. In fact, any “inverse-square law” can be formulated in a way similar to Gauss’s law.

In this step of our derivation, the fact that Gauss’s law is an alternative to Coulomb’s law can be quite valuable to us. When a point charge is placed at the center of an imaginary spherical surface(Gaussian Surface), the magnitude E of the electric field at every point on the surface is given by E = q/4πε0R2

At every point on the surface, E is perpendicular to the surface, and its magnitude is the same everywhere. So the total electric flux is just the product of the field Magnitude and the total surface area of the sphere:

which matches the form of Gauss’s law. We can begin to see why Gauss’s law is equivalent to Coulomb’s law.

ΦdA = E⊥dA = EdA′,  dA′ is the area of the corresponding spherical area element. 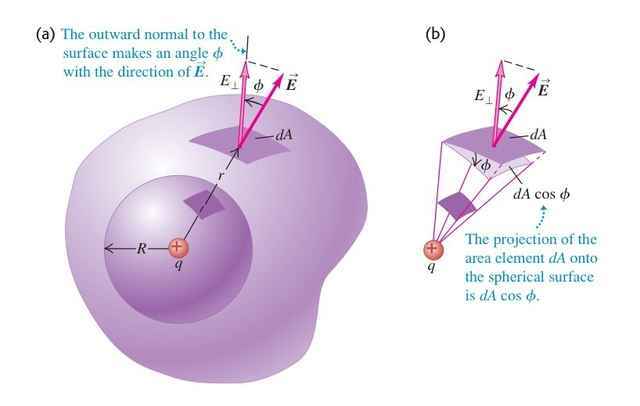 With all the work done, the final step is simple. If the surface enclosed not just one point charge q, but many charges q1, q2, q3, … . Then the total resultant electric field E at any point is the vector sum of the electric field of individual charges. We can perform the same analysis as in step 1 and 2 for every charge, and sum up to get the total electric flux:

Therefore, we have derived Gauss’s law: the total electric flux through a closed surface is equal to the total charge inside the surface divided by ε0.

The famous Faraday ice-pail experiment confirms the validity of Gauss’s law. More importantly, since Gauss’s law is an alternative to Coulomb’s law, Faraday’s experiment provides a more precise proof of the inverse-square relationship, because Coulomb’s experiment method, using a torsion balance and dividing of charges, is not very accurate.

The experiment goes that we mount a conducting container on an insulating stand. The container is initially uncharged. Then we hang a charged metal ball from an insulating thread, lower it into the container, and put the lid on. Charges are induced on the walls of the container, as in graph(b). But now we let the ball touch the inner wall (c). The surface of the ball becomes part of the cavity surface. If Gauss’s law is correct, then the net charge on the cavity surface must be zero. Thus the ball must lose all its charge.  By withdrawing the ball from the container and verifying that it is uncharged and that the charge on the container is unchanged, we can verify Gauss’s law in the static field.

We have derived Gauss’s law by applying a commonly used method in physics: start from simple and extend to the general case.  We’ve also seen experimental proof of Gauss’s law and its significance. The same analytical process can also be applied to Ampere’s law, another important equation of Maxwell’s four equations. However, note that we haven’t got a complete derivation of Gauss’s law here. We’ve proved Gauss’s law for charges inside a surface, but we have not discussed charges outside a surface. Also, Gauss’s law applies to all fields, not just time-invariant ones.

Why Don’t Electrons Crash into the Nucleus in Atoms?
3 replies