Science today is incredibly complex. Anyone who ever did scientific research knows that, but many in the general public seem to be completely unaware of this. I think this is a point where science communication can improve. 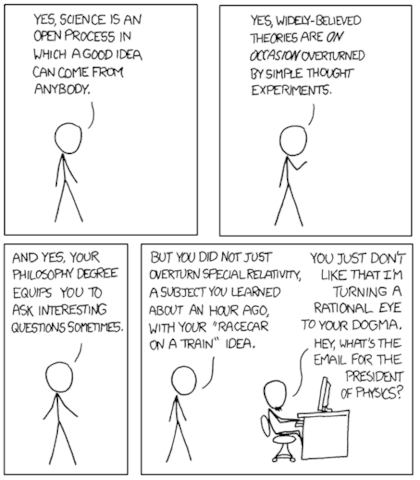 It is not that easy. From xkcd

If you are unaware that theories are backed up by hundreds to thousands of measurements, each based on various other publications and often years of research covering tons of details and various cross-checks, then those misconceptions can come up. Can we do something against that?

When I get asked what I am working on in particle physics, I always try to give both the overview but also an impression of daily work: Yes, the long-term task can be something like the search for new particles. But what you actually do is more like calibrating the response of some detector part to particles at different detector temperatures, different radiation damage, or one of the hundreds of other tasks involved in the overall publication that produces one round of news in the popular press (if you are lucky). I’m not sure how that can be translated to TV shows, newspapers and so on. “We search for new particles” sounds much more interesting than “I’m working on some tiny detail of the search”. But then the news reports “scientists looked for new particles”, drop one or two names of leading scientists, and it gives the impression scientists would “search for new particles” all day.

This is also related to funding: if you don’t understand the complexity of modern science, you don’t understand why experiments can cost billions of Euros/Dollars. Funding decisions are not made directly by popular vote, but the public opinion does have an influence on science funding in general.

What do you think? Can science popularisation improve in that aspect, and if yes, how?

Why Won’t You Look at My New Theory?

Dealing with Doubt as a Science Student

Should You Do Science for Love or for Money

Why Study Physics? A Bit Goes a Long Way!

Why the Need of Infinity in Physics
Scroll to top