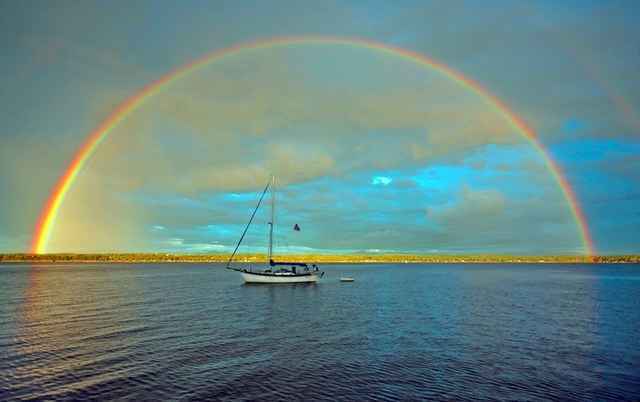 The simplest explanation of rainbow physics is based on internal reflections in the near-spherical shape of a raindrop.

Light rays enter a raindrop from one direction (typically a straight line from the sun), reflect off the back of the raindrop, and fan out as they leave the raindrop. The light leaving the rainbow is spread over a wide-angle, with a maximum intensity at the angles 40.89–42°. (Note: Between 2 and 100% of the light is reflected at each of the three surfaces encountered, depending on the angle of incidence. This diagram only shows the paths relevant to the rainbow.) — See Wikipedia Rainbow or The Theory of the Rainbow (Scientific American 1977) 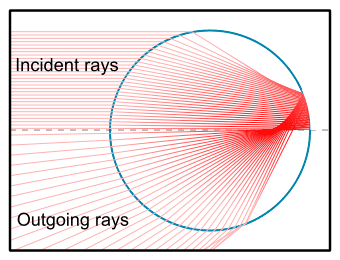 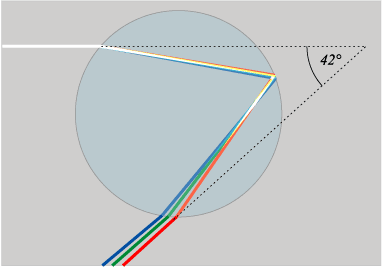 More challenging physics comes from the image of the rainbow seen on the surface of the water.   At first, I assumed that it was a reflection of the rainbow in the sky, just like reflections of blue sky and white clouds one sees on a calm day in a reflecting pool.  But then I came across Can Rainbows Cast Reflections? on the website of noted astronomer Bob Berman.  Paraphrasing Berman. “No, they do not.  Rainbows are not 3D objects and they do not cast reflections.  In the water, you see a different rainbow, not a reflection.” I spent a lot of time puzzling over that, because I didn’t understand Berman’s explanation. I also doubted its truth because I’m sure that I have seen rainbows in the rearview mirror as I drive.  It sounds like the Hollywood version of vampires that don’t make reflections in mirrors. 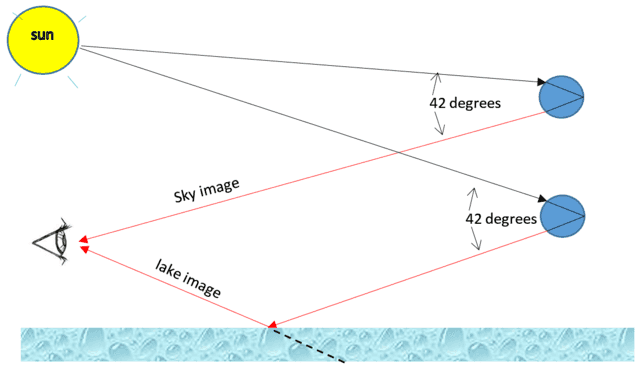 At first, I thought that Berman meant that the image in the water was sunlight hitting the surface and creating a rainbow effect as it was refracted back to my eye.  But no, that won’t work because the water in the lake is not in the form of spherical droplets.

After much thinking, I think I’ve got it.  No vampire magic is required. The colored light you see from a rainbow is not omnidirectional, it is a unidirectional beam aimed at your eye.   By analogy, imagine a man at the far end of a hall of mirrors holding a laser pointer pointed at your eye (assume a laser suitably attenuated for safety).  The mirrors on the walls, ceiling, and floor of this hall will show many images of the man, but they will not show the red dot of the laser because the laser beam doesn’t hit those mirrors.  However, if you turn your back, step to the side, and hold up a rearview mirror, you’ll see both the man and the red dot.  That is because the rearview mirror is inside the cone of light from the laser pointer.   So, to say that the red dot (or the rainbow) does reflect and that it does not reflect are both true statements depending on which mirror it refers to.  Yet, the image of the man appears in all the mirrors.  The man is a 3D object, but the red dot is not.

So, what do we see on the surface of the lake in the picture? That image is below the horizon from the eye of the camera.  It is reflected light.  It does pass through raindrops first, but not the same raindrops as the ones creating the sky image.

Using the same logic, it is correct to say that nobody else can see the same rainbow that I do.  As I stand, a person sitting near me sees light reflected from different raindrops than I do.  And if we consider light reaching me and him from the same raindrop, I might see green light while he sees red.  That is because of the difference in angles between the drop, my eye, and his eye.  In that sense, his rainbow is not the same as mine.

I was going to end this article here, but PF mentor jedishrfu urged me to continue with other rainbow effects, so I will.  One of Wikipedia’s very best articles, Rainbow, is a rich source.

The primary rainbow is reflected once inside the raindrop.  It is possible to have 2, 3, 4, or 5 reflections before the beam exits the drop.   Of course, higher-order rainbows are dimmer and thus harder to see.  (Picture source Tuscon News Now.) 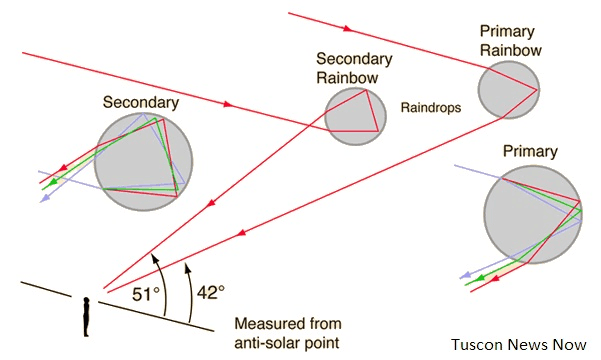 Let me make an assertion.   To see a rainbow, many or most of the raindrops must be of uniform size and shape.  My argument for that is that drop size and shape are related.   As the drops fall, air resistance flattens small drops more than large drops. Flattened drops reflect at a different angle.  Flattened drops might also oscillate or tumble. If the statistics of the raindrops are diverse, then the light will be reflected in many directions other than toward your eye, so you won’t see a rainbow.  If you do see a rainbow, that is direct evidence of the uniformity or correlation of the drop statistics.

A twinned rainbow happens when there are two predominant drop sizes.  The small flattened drops reflect at a different angle than the larger drops.

A rainbow is usually seen as less than half a circle.  In the right circumstances, full-circle rainbows can be seen above you in the sky, or below when you view from high up.  However, physics is the
same.

Contrary to my prior beliefs, I learned that full circle rainbows are not the same physics as a glory or a 22° halo.

Wikipedia says that the glory is believed to happen due to classical wave tunneling,  when light nearby a droplet tunnels through the air inside the droplet and are emitted backward due to resonance effects. (Picture Brocken Inaglory) 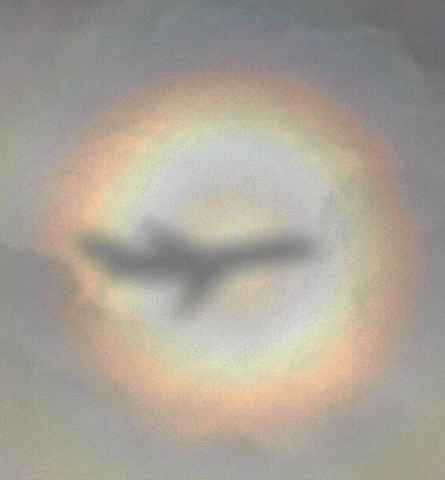 The 22° halo is due to reflections in ice crystals that are hexagonal, not spherical. (Picture Gladson Machado) 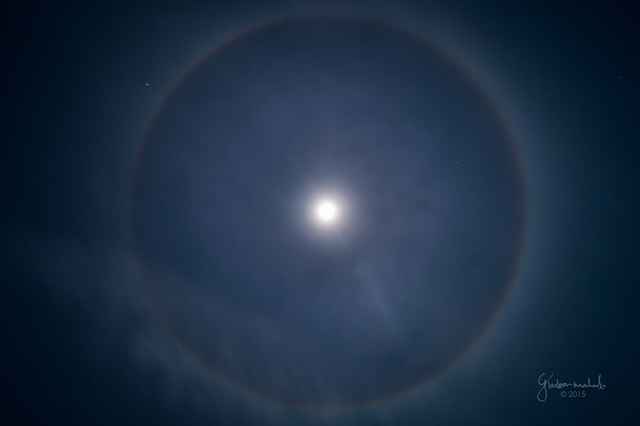 Sun dogs are closely related.  The image below shows very bright sun dogs in Fargo, North Dakota. Also visible are parts of the 22° halo (the arcs passing through each sundog), a sun pillar (the vertical line), and the parhelic circle (the horizontal line). 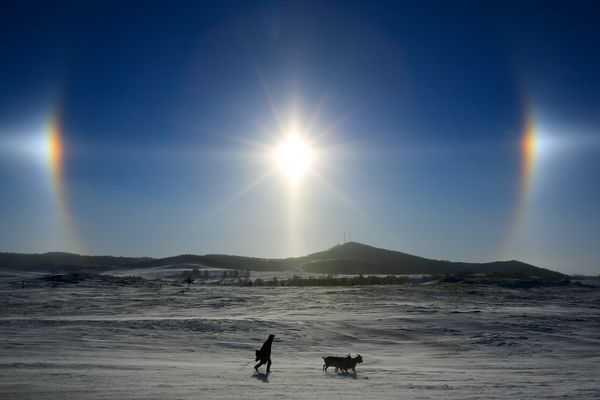 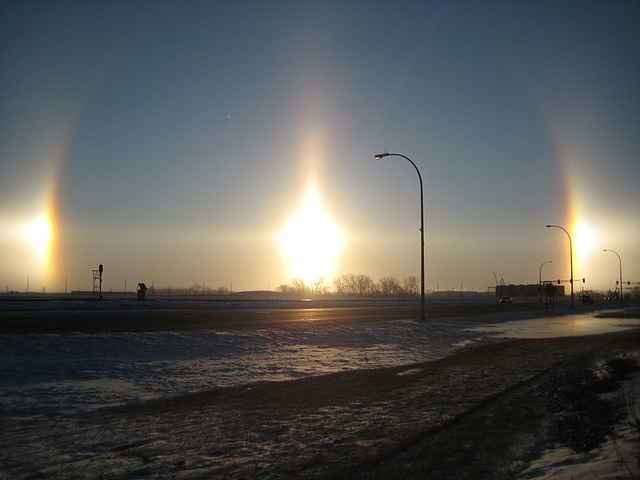 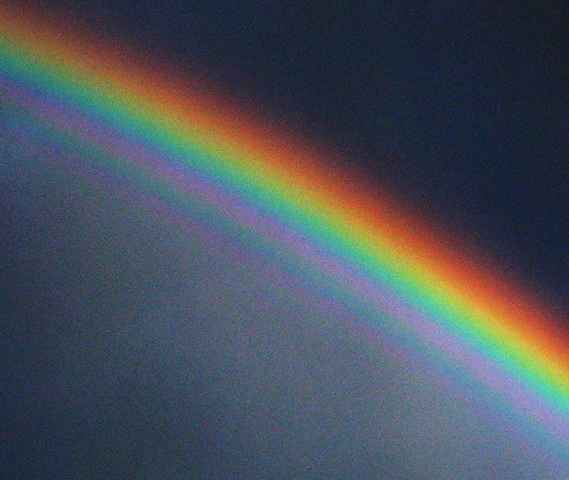 A supernumerary rainbow—also known as a stacker rainbow—is an infrequent phenomenon, consisting of several faint rainbows on the inner side of the primary rainbow, and very rarely also outside the secondary rainbow. Supernumerary rainbows are slightly detached and have pastel color bands that do not fit the usual pattern.


It is not possible to explain their existence using classical geometric optics. The alternating faint rainbows are caused by interference between rays of light following slightly different paths with slightly varying lengths within the raindrops.

The very existence of supernumerary rainbows was historically a first indication of the wave nature of light, and the first explanation was provided by Thomas Young in 1804 — Wikipedia Rainbow

The picture of the boat shows a reflected rainbow.  We already discussed the physics of that.

A reflection rainbow is seen when the sunlight is reflected from the water surface first, then up to raindrops in the sky, then internally reflected by raindrops back toward your eye.

When the sunlight is red, such as at dawn or dusk, then rainbows can still be formed but they will be monochrome.   (Image by  www.rodjonesphotography.co.uk) 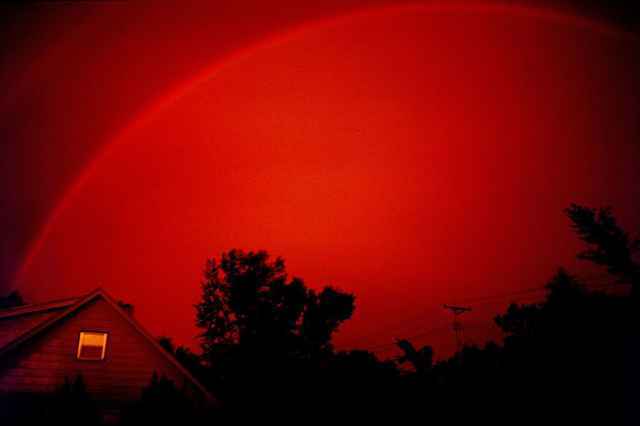 A monochrome rainbow in a red sky

When rainbows are formed by moonlight, they appear to be the

same white color as The Moon.   Fogbows also appear to be mostly monochromatic.  Fogbows are formed by the same physics as rainbows, but they are made with much smaller drops closer to the horizon.

Someday (probably well beyond my lifetime) we could have a close passage by a large comet with a brilliant tail.  If that happens, rainbows could be formed with comet light.  They would show us the spectrum of the comet’s light source, monochromatic or not.

Could we see a rainbow formed by the light from an aurora in the stratosphere?  That sounds difficult (because the aurora is not a point source) but not quite impossible.  That is fun speculation.  Maybe someone could finance a year for me in Iceland so that I could research that.

This remarkable picture, by dabrandner, appears to show a
third rainbow sandwiched between the primary and secondary double rainbows.  I call it a mystery because I’m not sure if the third rainbow is a twinned rainbow or a reflection rainbow, or some other kind. [Reader comments are welcome.] 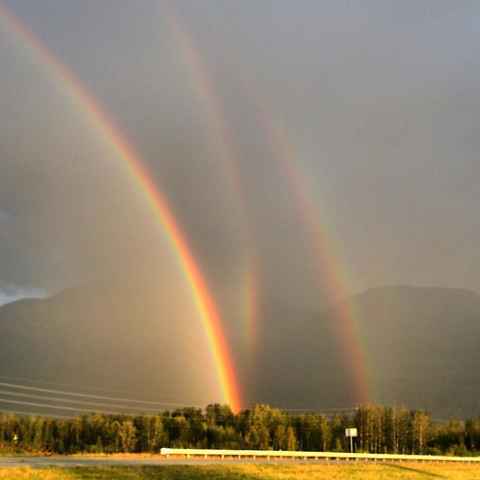 I confess that when I started this article with just a picture of my boat, I had no idea how far my research would take me into interesting physics phenomena. Thank you jedishrfu for egging me on.

Using the sky as a scientific instrument, we can observe:

I’m sure you will agree, that is very cool.

Thanks to jedishrfu and to Greg Bernhardt for their assistance and encouragement.

Elementary Construction of the Angular Velocity

Intro to the Millennium Prize Problems
Scroll to top