Since the previous article focused on 1-dimensional collisions, the aim here is to develop a method of solving 2-dimensional elastic collision problems using a Cartesian plane in which the x and y axes are defined to be respectively parallel and perpendicular (normal) to the line of collision. The latter is defined by the post-collision direction of the stationary mass since it cannot attain momentum except along the line of collision. Angles of ‘incidence’ and ‘refraction’ are measured with respect to the normal – ie the y-axis which is in the direction of the common tangent line to the colliding spheres.

We also aim to show why it is that post (elastic) collision trajectories of equal masses are at right angles and to explore the physics of ‘maximum deflection’ pertaining to the situation in which the heavier mass is in motion and collides with a lighter stationary mass.

Physics of an Elastic 2-Dimensional Collision

The start point for our analysis will be the following diagram which shows a moving mass m at the point of collision with stationary mass km (ie mass ratio red:green is 1:k): 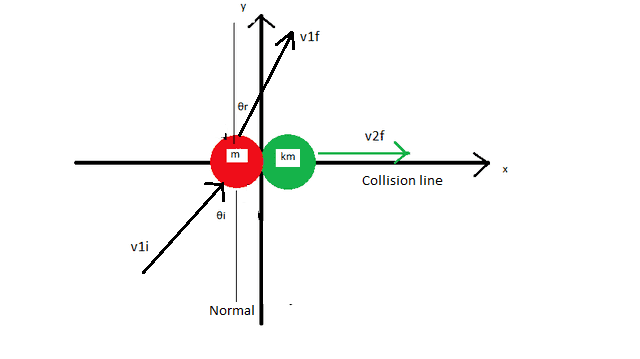 For the sake of simplicity, we assume that the colliding masses are in the form of spheres having the same radius but different densities to account for the difference in mass. If k>1 then the lighter mass is incident on the heavier and vice versa for k<1. The reader is asked to visualize the line of collision as being fixed along the x-axis with the moving mass m travelling at any given angle of incidence in the range ##0 < θ_i < 90°## where ##θ_i## is measured from the y-axis as shown. After the collision, the moving mass loses momentum in the x-direction and thus deflects (‘refracts’) toward the normal now forming angle ##θ_r##  with the y-axis. (It should be noted that the diagram above depicts a situation with k<1 otherwise the moving mass will experience   ‘negative refraction‘ with ##\theta_r## on the same side of the normal as ##\theta_i##). The post-collision velocity of the stationary mass is constrained to be along the line of collision (x-axis) since the collision impulse ‘transmits’ only along this line.

Observations Relating to the Angle Relationship

The very first observation we can make is that if k=1, we obtain the result that ##\theta_r=0##. In other words after the collision, the incident mass travels along the y-axis and the impacted mass along the x-axis. Without further ado, we have proven the result that in an oblique elastic collision between two equal masses, the post-collision trajectories are at right angles to each other. Physically what happens is that the initial component of momentum along the x-axis (for the red mass) is transferred completely to the green mass leaving the former only with its component of momentum along the y-axis.

If k>1 then the collision impulse will be greater than the initial x-component of momentum and so the red mass will experience ‘negative refraction’ since ##\theta_r<0##.  In optics ‘negative refraction’ is a somewhat rare but interesting phenomenon described in the following online article in Physics World.

This is only applicable in the case where the larger mass is in motion (ie k<1 in the above analysis).

At the angle of maximum deflection, it can be shown that ##\cos2\theta_i=-k## in which case the expressions for transmitted and refracted energy simplify somewhat:

In the above equations, m is the smaller mass and M=km the larger. We note in passing (without being able to advance any associated reasoning for the similarity) that these expressions are  similar in form to those for the transmission and reflection coefficients when normally incident light waves pass through an optically denser thin block:

Here ##\nu_1## and ##\nu_2## are the refractive indices of the less (optically) dense and more dense mediums respectively.

Armed with the equations developed above, we now turn our attention to some typical 2-dimensional collision problems. The reader is welcome to attempt these problems using conventional methods by way of comparison to the technique we will be using here. In the previous article on collisions, worked examples used were drawn from MIT problem sets (Problem Set 9), and for this article, we begin with another (Problem 6) from the same source: 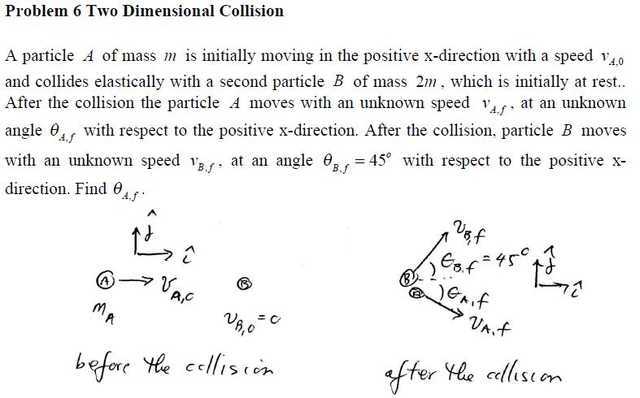 The next problem we solve is Example 8.12 (Page 108)  taken from a set of notes on collision theory from the University of Minnesota (Duluth): 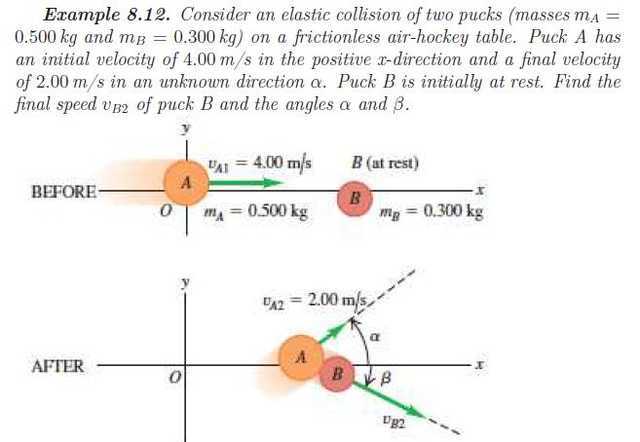 In this article we have established an angular relationship between the incident and refracted/reflected angles resulting from the elastic collision of moving mass m with stationary mass km: $$\tan\theta_r=\kappa \tan\theta_i\text{ with }\kappa=\frac{1-k}{1+k}$$  The theory rests on defining the x-axis and y-axis as being the collision line and normal to the collision line respectively. The expressions developed explain various characteristics of elastic collisions such as post-collision orthogonal trajectories if equal masses collide.  Differentiating the expression for (the tan ratio of) angle of deflection enables us to establish the conditions for maximum deflection when a large mass is incident upon a smaller. Finally, the worked examples illustrate how the technique may be applied to solve 2-dimensional collision problems.

This article has been improved (I believe) immeasurably thanks to the review comments of PF staff members vanhees71, haruspex and ehild.  I would like to thank them all for taking the time to review this article and suggesting various changes which I have implemented to the best of my ability. I hope the article now stands up to rigorous scientific scrutiny as well as meeting typesetting conventions.

Do Photons Move Slower in a Solid Medium?

Exploration into the Physics of Rainbows
4 replies

Can We Do Better Than Mechanical Energy Conservation?
Scroll to top