We can get a handle on this by observing that the geometry we have been looking at is vacuum everywhere–the stress-energy tensor is zero. But in our real universe, of course, there is matter and energy, so the stress-energy tensor is not zero everywhere. It is true, though, that, at least on the distance scales we deal with most of the time (basically in any context except cosmology), we can view the universe as consisting of isolated objects containing nonzero stress-energy, separated by large regions of zero stress-energy. (True, strictly speaking, there is very sparse matter and energy present in these regions, but it is much too sparse to have any significant effect on the spacetime geometry, so its stress-energy tensor can be considered to be effectively zero.) And since most of the isolated objects are rotating, if at all, very slowly (here “very slowly” means their angular momentum is very small compared to their mass when both are normalized to geometric units), they can be considered, at least to a good approximation for most purposes, as being spherically symmetric, which means that the vacuum regions around them, at least at distances that are small compared with the distance to other isolated objects, can also be considered to be spherically symmetric.

This is important because there is a theorem known as Birkhoff’s Theorem, which says that any vacuum solution to the Einstein Field Equation that is spherically symmetric must be (at least a portion of) the Schwarzschild geometry. So if we idealize a single isolated object as a spherically symmetric region of nonzero stress-energy surrounded by vacuum out to infinity, then the spacetime geometry must be Schwarschild from ##r \rightarrow \infty## down to some finite value of ##r##, which we can call ##R##, corresponding to the surface of the isolated object. (Inside this surface, the geometry will be different because the region is not vacuum; we’ll go into that below.)

The obvious next question is, what values of ##R## are possible? Of course, this question is very general, but we can start by asking a more specific version of it: what values of ##R## are possible for an isolated object that is static, i.e., ##R## does not change with time? (Here it doesn’t matter whether we interpret “time” to be Schwarzschild coordinate time, Gullstrand-Painleve coordinate time, or the proper time of some observer sitting on the surface.) It turns out that there is another theorem, known as Buchdahl’s Theorem, that answers this question: for a spherically symmetric static object, we must have ##R > \frac{9}{4} M##, i.e., 9/8 of the Schwarzschild radius ##r = 2M##. The basic reason is that, for a static object, gravity must be balanced by internal pressure; and it turns out that, as ##R \rightarrow \frac{9}{4} M##, we have ##p \rightarrow \infty## at the center of the object.

(By the way, there is another closely related theorem, due to Einstein, which says that a spherically symmetric system composed of particles in circular free-fall orbits, whose overall mass and radius does not change with time, must have a surface radius ##R## which is larger than ##3M##. Here the reason is that, as ##R \rightarrow 3M##, the free-fall orbits have orbital speeds approaching the speed of light–more precisely, the worldlines of the orbits become null instead of timelike. We now know that this is because ##r = 3M## is what is called the “photon sphere” in the Schwarzschild geometry, the radius at which light rays can have closed circular orbits. Einstein concluded–incorrectly–that his theorem showed that black holes could not form; we now understand that this is a misconception, similar to the one discussed in the first article of this series, that objects can never reach a black hole’s horizon.)

Buchdahl’s Theorem tells us something important: there cannot be a static object with a surface radius arbitrarily close to ##r = 2M##, let alone equal to or less than that value. However, there is still a way for an object with surface radius ##R## smaller than ##\frac{9}{4} M## to exist: if ##R## is changing with time. This opens up two possibilities: ##R## could be decreasing with time, or ##R## could be increasing with time.

The first possibility is just gravitational collapse: an object that can no longer support itself against gravity will collapse and form a black hole. The first idealized model of this kind of process was presented in a classic paper by Oppenheimer and Snyder in 1939. The vacuum region of their model has a spacetime diagram, in coordinates similar to Kruskal-Szekeres coordinates, that looks similar to this (courtesy of PF Science Advisor DrGreg): 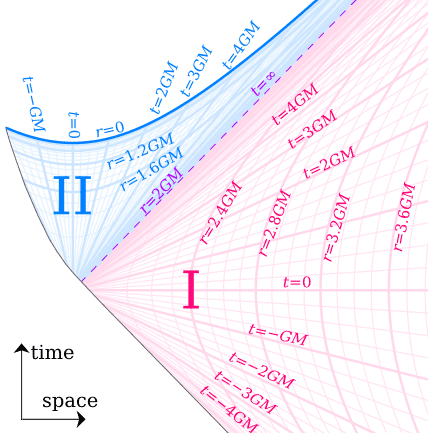 As you can see, this diagram only includes a portion of regions I and II from the full Kruskal-Szekeres spacetime diagram that we looked at in previous articles. The boundary on the left of the diagram is the surface of the object: the region to the left of that surface, not shown on the diagram, has the spacetime geometry like that of a portion of a collapsing universe, i.e., a collapsing FRW spacetime. The point at the upper left of the diagram is where the collapsing object reaches ##R = 0##, i.e., its surface collapses to a point; that is where the singularity forms (in this idealized model), and the hyperbola at the top is the singularity itself. So if we were to fill in the non-vacuum region occupied by the collapsing matter, it would have a “width” from right to left that gradually decreased from the bottom to the top of the diagram, tapering to zero width at the top left corner where it meets the singularity. The left boundary of this region would be labeled ##r = 0## if we adopted appropriate coordinates in this region (which would not be precisely the same as any of the ones we have looked at in these articles for the vacuum region); and in this region, ##r = 0## means what your ordinary intuition would think it means, the spatial point at the center of the collapsing object. In more technical language, the curve ##r = 0## is timelike up to the point where the singularity forms; only after that does it become spacelike, like a moment of time instead of a place in space.

Notice that in this diagram there is also an event horizon–the 45 degree dotted line going up and to the right. The event horizon also extends inside the collapsing matter; the 45 degree line just extends into the non-vacuum region until it intersects its left boundary at ##r = 0##. It is instructive to think about what this means physically. Consider a series of light rays emitted radially outward from the spatial point ##r = 0## inside the collapsing matter. Any such rays emitted before the event horizon line will reach the surface of the matter and continue outward to infinity. But there will be some ray that is emitted exactly at the event horizon line. This ray will reach the surface of the collapsing matter at the exact instant that the radius ##R## of the collapsing matter is equal to ##2M##. This ray will then, since it is now in the vacuum region with Schwarzschild geometry, remain at ##r = 2M## forever. So the event horizon can be thought of as simply the set of all such light rays, emitted in all possible directions. (These rays, or more properly the null curves that describe their worldlines, are called the “generators” of the horizon.)

This model presents a consistent (if highly idealized) picture of gravitational collapse, at least until we get close to the singularity and issues of arbitrarily large spacetime curvature arise. (We’ll talk about that further below.) Consequently, the portions of the Schwarzschild geometry that appear in this model, namely the portions of regions I and II and the event horizon between them, would appear to be physically reasonable: these portions of the geometry could exist in our universe, at least as far as classical GR is concerned. But there is no reason to think that the rest of the geometry–the “past horizon” and regions III and IV–is physically reasonable, at least not based on models of gravitational collapse.

What about the other possibility mentioned above, that the surface radius ##R## of an object could be increasing with time? A model of this sort would basically look like the time reverse of the Oppenheimer-Snyder model: we would have a vacuum region consisting of portions of regions I and IV from the Kruskal-Szekeres diagram, and the past horizon between them, plus a non-vacuum region containing expanding matter, with geometry like that of a portion of an expanding FRW spacetime. The past horizon would extend into this region and intersect the spatial point ##r = 0##. The term “white hole” could be used to describe this kind of model (although it is more frequently used to describe region IV in the full, vacuum everywhere Schwarzschild spacetime).

If we consider whether such a model could describe an isolated region of our universe where a white hole is exploding, much as the Oppenheimer-Snyder model describes an isolated region where an object is collapsing into a black hole, there is a serious difficulty: where does the initial singularity come from? There is no known physical process that could create one since the past horizon isolates it from all other objects in the universe–much as nothing can get out of a black hole, nothing can get into a white hole. So such a white hole singularity would have to be “built into” the universe from the beginning. That seems highly implausible, and as far as I know, nobody has seriously tried to defend such a model.

However, there is another reason for thinking that a white hole model for the entire universe is unlikely. This is basically the converse of the reason for thinking isolated white holes in our observable universe are unlikely. There the question was where the initial singularity would come from; here the question is where the region outside the past horizon would come from. Basically, our universe would have to be an isolated white hole inside some much larger “universe”, so this model doesn’t really give a final answer; it just pushes the question back a step. The model of our entire universe as an expanding FRW spacetime does not have this issue, because an expanding FRW spacetime–the full model, not just a portion–is self-contained, with no need to postulate anything outside it.

To summarize, our best current belief is that regions I and II of the Schwarzschild geometry, as shown in the Kruskal-Szekeres spacetime diagram, are physically reasonable, but the rest of the geometry, including the “antihorizon” boundary between those two regions and the other two, is not. At least, that is the best answer we can give according to classical General Relativity; quantum effects might change this picture. In fact, they are expected to, at the very least, when spacetime curvature becomes large enough, where “large enough” is thought to be, heuristically, when the radius of curvature of spacetime is of the order of the Planck length. In the Schwarzschild geometry, this would happen for some value of ##r## that was sufficiently small, i.e., sufficiently close to the singularity at ##r = 0##.

(1) Einstein’s 1939 paper on a stationary system of particles in free-fall orbits:

What Are the Thermodynamics of Black Holes? A 5 Minute Introduction

How to Better Define Information in Physics

An Equation for the Centrifugal Force Reversal Near A Black Hole

Struggles with the Continuum – Relativity and Quantum
33 replies