In this article, I will discuss some experiments in the 19th and early 20th centuries that looked at how the velocity of a light source affects the speed of the light emitted from it. In particular, the Fizeau water experiment, the de Sitter double star experiment, and the Michelson-Morley experiment, which is the most well known. These experiments cast significant observational doubt on the Galilean idea of relativity as it applies to light, that the velocities of the emitted light and the source simply add together. We know now that this is wrong and that special relativity must be taken into account, but that was not always the case and had to be inferred from observation.

I will not discuss experiments devised with the hindsight of special relativity (such as measurements of time dilation), although they are interesting. I will also not go into the details of ether theory, because I’m not too familiar with it.

All images in this article are from Wikipedia.

Early Determination of the Speed of Light

The first attempted measurement of the speed of light that I know of was by Galileo himself and an assistant, who stood on opposing hilltops and attempted to communicate by opening a lantern shutter and waiting for the lantern on the opposing hill to be opened in response. They did not notice a delay and concluded that the speed of light must be much faster than the speed of sound. Although this experiment was inconclusive, it was one of the first examples of a negative result being used to constrain the bound of an unknown quantity, an analytical technique so common in physics today. 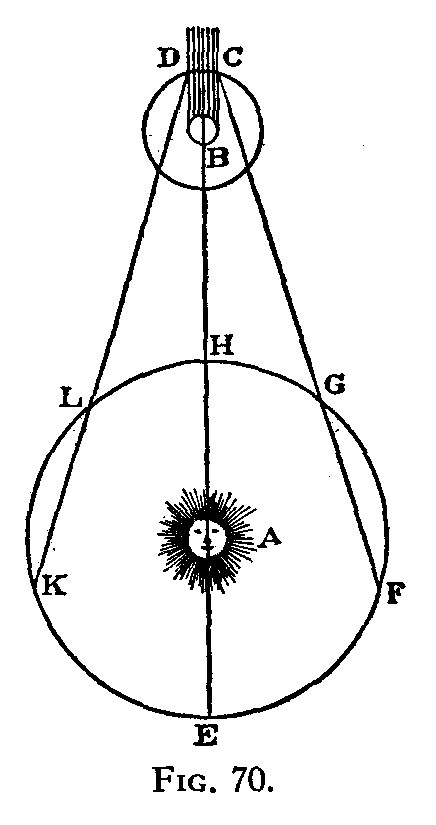 Diagram of Romer’s observations. The timing of Io’s eclipses is different if the Earth is at H or at E.

The first partially successful measurement was by Ole Rømer who was making careful observations of eclipses of the moon Io by Jupiter’s shadow. He noticed that the eclipses did not appear on a regular schedule as expected, but varied by a few minutes depending on where Earth was with respect to Jupiter in its orbit. He reasoned that this variation was due to the time taken for the light to reach the Earth, and took an extra 22 minutes to cross the diameter of Earth’s orbit if it was farther from Jupiter. This isn’t too far off from the 16 minutes we now know it takes. With an accurate knowledge of the astronomical unit, this puts his speed of light at 222,000 km/s. This is significant because it was the first piece of evidence that the speed of light is finite.

In the 18th century, James Bradley made a measurement of stellar aberration, the apparent change in position of a star due to the velocity of Earth relative the star (not to be confused with parallax, which is a change in apparent position due to the changing position of Earth). Based on the 20-arcsecond change in a star’s position due to aberration over a year, he concluded that light must travel about 10,000 times as fast as Earth does around the sun, and was able to conclude that light takes eight minutes to reach the Earth from the sun, even though he didn’t know the speed of light or the astronomical unit.

The first “modern” measurement of the speed of light was in the 1840s by Hippolyte Fizeau. He shone light through the teeth of a quickly rotating cog, off a distant mirror, and back through the cog. If the cog rotated slowly, the light would pass through the same gap. If it was going sufficiently fast, it would be blocked as the tooth would rotate into its path. If it were going even faster, the next gap would rotate into its path and it would get through again. By measuring the amount of light getting through as a function of the cog’s rotational speed, he could measure the speed of light by finding the cog speed that would allow it to get through the next gap. He measured about 313,000 km/s, within 5% of the actual value. 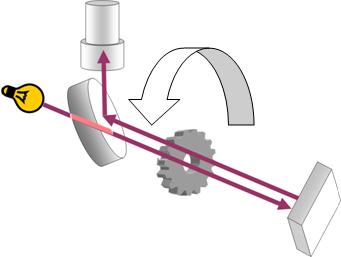 Diagram of Fizeau’s experiment. He presumably did not use a lightbulb, and the mirror was eight kilometers away.

In addition to his cogwheel experiment, Fizeau did an experiment measuring the speed of light through moving water. Light through water is slower than light in a vacuum, and if the light is “dragged” along with the water then one could naively expect that its velocity would just be the sum of the velocity of the water and the speed of light in the water. To test this, Fizeau designed an experiment where two parallel beams of light were sent through two columns of counter-flowing water, reflected off a mirror, and sent back through the other column of water. One beam of light would always be travelling with the current, and one always against it. The beams were then projected onto the same spot, so that an interference pattern could be seen. The magnitude of the interference depends on the relative velocity of the two beams.

Set up from the Fizeau experiment. Light emitted at S is split into two beams at G, through two slits at E, and through tubes of water in A where it flows in the directions of the arrow. After being reflected at m, the light goes back through the opposite tube of water, and the two beams meet again at G and interfere. One beam is always going with the flow of water, while one is always going against the flow.

The result was not null. But it did not verify the Galilean dragged light hypothesis. The size of the interference fringe he observed was about half of what was expected. Taking special relativity into account, we can apply relativistic velocity addition to find that the two beams actually differ in speed by a  factor ##1-\frac{1}{n^2}\approx 0.43## times the speed of the water (n is the index of refraction), so the special relativistic effect is roughly half of the Galilean effect. Fizeau wasn’t aware of this derivation, but he could see that the Galilean prediction was wrong by a factor of two.

Looking at an English translation of his initial report, he comments that the observed interference effect is half that of his expectation, but quite close to the “ether drag” theory that the medium of light propagation was dragged along with the water. Again, hindsight is 20/20 but this was a step in the right direction.

This analysis actually took place in the 1910s, after special relativity had been formulated, but conceptually it could have been understood centuries earlier. It was proposed by Willem de Sitter, better known for the eponymous space-time and its arch-nemesis, de Sitter space and anti-de Sitter space.

A diagram of the “experiment,” an observation of an orbiting star at two phases of its orbit, with the assumption that the speed of light is additive.

Consider the light being emitted by one member of a binary star system, with the Earthward velocity of the star oscillating periodically with the orbit. If the speed of the light adds to the speed of the star, it could eventually catch up with the light emitted by the star as it moves away from us in its orbit. If the stars are sufficiently far from Earth, we would observe some strange things as the blue-shifted light caught up with the red-shifted light, including spontaneous duplications of spectral lines, multiple appearances of the same star at a given time, and violations of Kepler’s laws, all of which would be more extreme for more distant stars, as there would be more time for the fast light to catch up with the slow light.

An animation of faster-blueshifted light catching up with slower redshifted light from a member of a binary star system. If both pulses reach Earth at the same time, the image of the star briefly doubles.

Fortunately, we live in a galaxy full of binary star systems, so we can test this. In 1913, none of these effects had been observed (although de Sitter’s paper is a little skimpy on the data), and they still haven’t. If the simple velocity addition of light were true, then to be consistent with observations the laws of orbital mechanics would have to depend on their distance from Earth.

This experiment is typically mentioned when introducing special relativity, sort of as an experimental nail of the coffin for ether theory. There’s a lot of mixing and mashing of historical timelines that are rearranged to introduce concepts in a pseudo-chronological order, and it’s not actually known to what extent Einstein was influenced by it in 1905, as he only credits the Fizeau experiment.

A Michelson interferometer, where light from a is split at b, bounces off the mirrors at d and c, we recombined at q and then observed at e.

The experiment was not so much a refutation of Galilean relativity per se, but rather the idea that there is a fixed reference frame through which light propagates. This experiment was basically the most sensitive interferometer of its time, spitting two beams of light, sending them along different perpendicular paths, and then reuniting to form an interference fringe. If the speed of light were different in different directions due to the motion of the Earth relative to the rest frame of light propagation, the interference pattern would change. By rotating the entire experiment, they close probe the relative velocities of light in the two arms relative to Earth’s movement, and they found nothing. Any potential signal that could observe was less than a fortieth that of the theoretical prediction.

The Michelson-Morley experiment with a preferred light frame. If the entire apparatus, on the orbiting Earth, moves with respect to light’s reference frame, the beams going in perpendicular directions would arrive at different times.

These results, according to my 21st-century physics education, really made people think about a potential rest frame for a light and the existence of luminiferous ether. Lorentz developed his transformations in order to explain this experiment, which fit nicely into special relativity.

All of these experiments probe a fairly simple idea, that the velocity of light is additive with its source. Each of them is fairly straightforward to understand on a conceptual level and doesn’t require special relativity to understand (although it certainly helps in interpreting their results). By considering these experiments, I think one could discount the idea that light’s speed simply adds to the speed of its source, as is required by Galilean relativity, and would force the physicists of the day to dig deeper to uncover the nature of light, which is indeed what happened. Physics students have been told for generations that the speed of light is constant in all rest frames and that that leads to Lorentz transformations, but it’s important to remember how we know that is the case.

Understanding the General Relativity View of Gravity on Earth

Why Does C Have a Particular Value, and Can It Change?