There is an interesting story unfolding in particle physics. The main motivation for building the Large Hadron Collider was to search for new particles. And in July of 2012, the LHC found the Higgs boson, confirming the existence of this entirely new, but widely expected elementary particle. But the Higgs wasn’t the only particle most physicists were hoping for. Also at the top of their list were “superparticles” — bosonic partners, such as “squarks,” to existing fermions, such as quarks, and fermionic partners, such as “gluinos,” to existing bosons, such as gluons. Visiting CERN, one gets the impression that there’s a giant banner hanging in the cafeteria announcing “Welcome Home Superparticles!” But superparticles haven’t shown up at the party.

There are a few reasons most high-energy theorists would like superparticles to exist. For one thing, they are necessary particle fields in superstring theory. For another thing, they potentially solve what is considered “the worst prediction in quantum field theory” — the prediction of an enormous vacuum energy, strong enough to curl spacetime up into an infinitesimal ball, due to adding up the vacuum energy contributions of all elementary particle fields. Superparticles could balance this out if some of them have masses close to the Higgs mass so that the vacuum energy could be zero or very small, as we observe. But the third, and perhaps most convincing, the reason most theorists like supersymmetry is because of unification.

In 1981, Frank Wilczek and two other theorists wrote a brief paper (“Supersymmetry and the Scale of Unification”) on an interesting finding. In our best Grand Unified Theory, in which the electromagnetic, weak, and strong forces, corresponding to the Lie group [itex]U(1) \times SU(2) \times SU(3)[/itex], are unified as parts of one force, corresponding to the [itex]Spin(10)[/itex] Lie group, the strengths of the three forces should be the same at tiny length scales. And, in fact, when we use QFT to calculate how the three force strengths change with length scale, they do appear to nearly meet in strength at a very small distance: 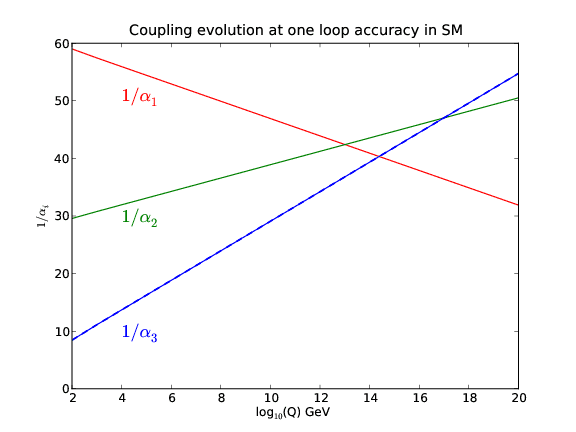 This is one of the reasons to believe in unification. And what Frank Wilczek found, in 1981, is that if one adds superparticles to this calculation, those three lines can, in fact, meet at a single point. Superparticles have been at the top of most theorists’ wish list ever since.

Since I spend most of my time at the Pacific Science Institute on the island of Maui, happily working on my own research, I don’t talk to other physicists very often. But, occasionally, I do leave my island, and one of those times was in July of 2009, when I traveled to another island, in the Azores, to attend an FQXi physics conference. At that conference, Frank Wilczek gave an excellent talk, via Skype, on unification, including expressing his confidence in supersymmetry and his expectation that superparticles would be seen at the LHC. Now, I have the greatest respect and admiration for Frank Wilczek — he possesses an amazing mind, is a great physicist, and is an all-around good human being. At a SciFoo conference earlier in 2008, where I first met Frank in person, we were asked to introduce ourselves to the room full of other attendees by providing three words that describe us. Frank’s words were “Think, Play, Repeat,” which I thought was great. (I had a sense of humor and just said “unification.”) And given that Frank was THE GUY who figured out how superparticles could help with unification, the bias for superparticles that he expressed in his talk was completely understandable. But I respectfully disagreed. And, many years previously, I had won a bet with two string theory grad students (who have since left the field) about superparticles showing up. So, at the end of Frank’s talk, I raised my hand and asked him if he would be willing to make a bet on whether superparticles would be found.

I knew I was being kind of a confrontational jerk by putting him on the spot like this. But he was actually open to the idea of a bet. I asked if he would like to suggest the amount and the time frame. There is a history of good-natured bets between physicists, usually “gentlemens’ bets,” with some token or small amount. But Frank suggested $1000 as the amount, which is more than nothing, and a time frame of 6 years. Max Tegmark, as conference host, agreed to arbitrate the bet. Now, I’m sure there’s an easier way to make money than betting against Nobel laureates, but I thought it would be good for there to be a public bet on superparticles. We agreed on the bet, virtually shook hands on it, and that was that. I excitedly tweeted:

“Frank Wilczek just bet me $1000 that superparticles will be detected by July 8, 2015. Max Tegmark will arbitrate.”

Frank’s reasonable expectation was that six years would be enough time for the LHC to run and analyze collisions at 14TeV, a high enough energy that it should detect superparticles if they are of low enough mass to naturally balance the vacuum energy. But the LHC suffered a few setbacks, and its first run was only at 7TeV. And the LHC did find the Higgs and no superparticles. So, since it’s July 8, 2015, and superparticles have not been discovered, it seems like my winning this bet is secured. However, the LHC has just started its new higher energy run, at 13TeV. According to their 2015 schedule they started the new physics run on July 5. And the spirit, if not the exact agreement, of my bet with Frank, was that six years would be enough time for the LHC to collect and analyze high energy collision data. But six years wasn’t quite enough time, so that’s not really fair, even if I won the bet on a technicality. But, as another technicality, when I made my tweet, which is the only written evidence of the bet, I used the word “detect” instead of “discover.” Since the LHC has been running and collecting data for the past three days, it is possible that they’ve “detected” superparticles, even though they won’t have enough data to officially “discover” superparticles for many months. So, as our judge, I suspect Max is mulling this situation over right now. And Frank just tweeted:

“My recollection of this is hazy to nonexistent but I will happily, and promptly, abide by the decision of the arbiter.”

So, the decision on this superparticle bet is now in Max’s hands, probably to be decided in a matter of hours. I don’t expect, even if I do win, that it will change a lot of minds about supersymmetry. But I like the idea that it will make people think about it more. Especially since it makes string theory look worse. And, of course, in the interest of fairness, and because I’m low on funding, if I do win this bet now, I would be happy to make another even-money bet with Frank, for a reasonable amount, and at a date of his choosing, far enough in the future for the LHC to have collected and analyzed the new collision data and still not seen superparticles.

Garrett Lisi is an unusual physicist. After getting his Ph.D. from UC San Diego, he moved to the island of Maui to find an optimum balance between enjoying the outdoors and pursuing his own theoretical research. While chasing an unanswered question at the heart of Quantum Field Theory, he soon found himself looking at the most beautiful unified model of particle physics anyone had ever seen. Dr. Lisi has authored numerous publications, earned many awards, and presented in forums around the world. Wishing to share his good fortune, Dr. Lisi recently founded the Pacific Science Institute on the island of Maui, with the mission of making life better for scientists. His story and work have been featured at TED, in Outside Magazine, The New Yorker, Surfer, and Scientific American.

Learn About Supersymmetry and Deligne’s Theorem