See also part 1 and part 2 of the series.

The LHC commissioning phase is coming to and end. On Wednesday May 20th 2015, the first collisions at full energy (13 TeV) happened, a world record and very exciting for the experiments. The collision rate was still low, of course. To predict it, physicists use the concept of cross-sections: the smaller the cross-section area, the smaller the target you have to hit. Cross-sections can be given for specific collision processes as well, like the cross-section for a collision that produces a Higgs boson. It is not a classical area, but the same formulas still apply. 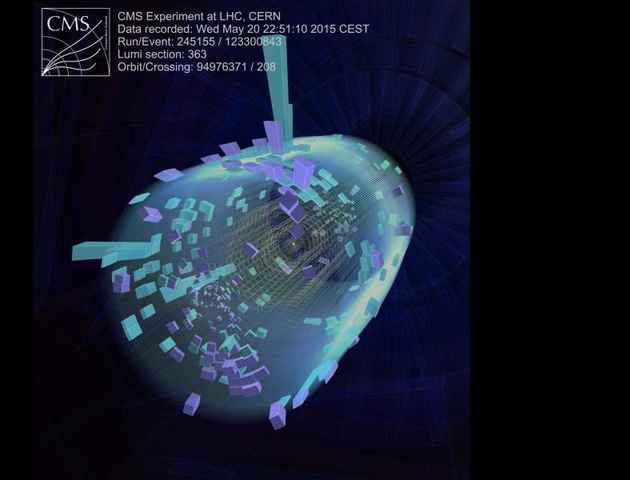 One of the first 13 TeV collisions at the LHC, seen by CMS.
The main use of those event displays are press releases.

Before particle physics used it, this concept first got important for nuclear reactors and weapons. Fission produces neutrons that have to hit other uranium nuclei to induce more fission. The area of an uranium nucleus (when viewed from one side) is about 10-28 m2. Working with those exponentials is impractical, so physicists invented a new unit: for nuclear physics the whole uranium nucleus is “as large as a barn”. Therefore, 1 barn = 10-28 m2. This is combined with SI prefixes to make millibarn (mb), microbarn (µb), nanobarn (nb) and so on.

Proton-proton collisions at the LHC have a cross-section of about 100 mb.

If you multiply the cross-section with the integrated luminosities of 2011 and 2012, the LHC produced about 80 000 and 400 000 Higgs particles, respectively. So why did it take until mid 2012 to discover it? Well, those events were hidden in 2 500 000 000 000 000 (2.5 quadrillion) other collisions! Finding a needle in a haystack is trivial compared to that. To make it worse, most decays are indistinguishable from other processes. Only a few rare decay types are clear enough to separate them from other events.

There are searches for particles with even smaller cross-sections, where the experiments would be happy to get a few of them in a year. Those searches would be impossible without the very high luminosity of the LHC.

There are still some analyses ongoing with the 2011 and 2012 collisions, but the main focus is on new data now. As mentioned in part 2, commissioning takes time. The experiments will start regular data taking in early June at a low collision rate. The machine operators will increase the number of protons and the collision rate over time. The experiments hope to get about 1/20 of the 2012 collisions in June and July. After a shorter break in August, it is planned to get about half the number of 2012 collisions until November. The higher energy still makes the 2015 collisions much more valuable than those recorded so far. New particles could be discovered even with data from June and July!

LHC Quiz: Think You Know about the LHC?

Frequently Made Errors: Pseudo and Resultant Forces
Scroll to top