Providing accurate fluid dynamics experiments for undergraduate laboratories is challenging in several ways, including reproducibility, simplicity, and accessibility to introductory students.  The data from many introductory experiments, for example, is not sufficiently accurate to test whether a linear or a quadratic relationship more appropriately models the dependence of drag force on velocity.  An optimal laboratory experiment is sufficiently inexpensive for multiple groups of students to perform with accurate, repeatable results. Examples are plentiful in undergraduate kinematics laboratories, including simple harmonic oscillators and sliding block experiments.  Cost-effective and accurate experiments in fluid dynamics are less common.

Video cameras with good resolution and frame rates from 60-240 frames per second are widely available, providing an opportunity for cost-effective access to accurate experiments in fluid dynamics.  This article provides an example and explains the due care needed to ensure accurate dynamics in a laboratory experiment with common, inexpensive materials.  Simple lead and steel spheres are dropped through stacked layers of canola oil and glycerine in a clear graduated cylinder.  This design provides ample experimental data for the development and testing of predictive models with the spheres both speeding up after being released from rest in the canola oil and slowing down after transitioning from the canola to the glycerine.

Table 1:  Diameter and mass for four spheres used in the experiment.  All digits may not be significant but are included to reduce rounding errors in anticipated predictive modeling.

Four different spheres of known diameters and masses, as described in Table 1, were individually suspended using forceps near the top of a graduated cylinder containing canola oil and glycerol, then dropped to go through both fluids before reaching the bottom of the cylinder.   Liquid thicknesses were a compromise between fitting into the height of an available graduated cylinder and having smaller spheres approach terminal velocity in each liquid.  The graduated cylinder and liquids are shown in Figure 1.  Pilot testing had shown that when released from the air, an air bubble attaches to and remains with the sphere for 5-10 cm into the liquid which significantly impacts the net force and dynamics of the sphere falling through the fluid.  Releasing the sphere from a position slightly immersed in the top liquid eliminates this confounding factor and ensures more accurate data.

A video camera (Nikon CoolPix B500)  was used to record each trial at 120 frames per second and analyzed using some “best practices” as described below apply to this experiment.  Videos were then downloaded onto a computer and then imported into the free video analysis program Tracker version 5.1.1.  The raw position vs. time data was entered into a spreadsheet, and velocity vs. time was determined for each trial as described below.

Over the years, our laboratory has developed some practices for ensuring greater accuracy in video analysis that was used in this experiment:

Predictive models require accurate fluid densities to accurately compute the buoyant forces on the falling spheres.  For the temperature at which the experiment occurred (28 °C), the densities of canola oil and glycerol were experimentally determined by measuring the mass of each fluid at 10 equal increments in a graduated cylinder on a calibrated digital scale and performing a linear least squares fit to determine density as the slope of the best fit line of mass vs. volume.  With distilled water, this technique has been shown to give agreement with accepted values to within 0.1%, which is the uncertainty in the slope performing the measurement with distilled water.  Uncertainties with canola oil and glycerine are larger, likely due to the higher viscosities of these liquids.  However, the differences between the measured densities reported here in Table 2 and typical values are significant, likely due to variations in production and purity of these consumer products. Given these variations, it is recommending that any modeling use measured densities from the experiment in question rather than typical values. 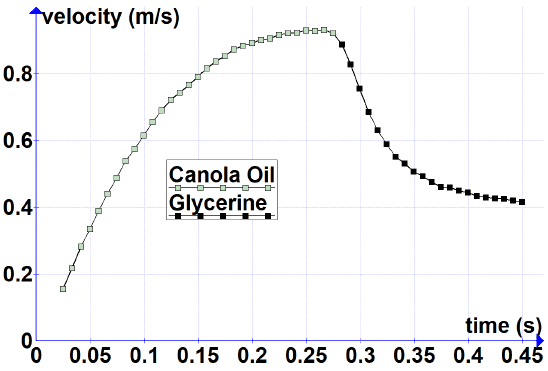 Velocity vs. time is shown in Figure 2 for the smaller lead sphere.  The data shows the expected behavior of the sphere accelerating from rest and approaching a near-terminal velocity close to 0.93 m/s as it falls through the canola oil.  As expected, the sphere begins to slow when it enters the more viscous glycerine, showing the expected behavior and slowing to a near-terminal velocity near 0.4 m/s.  To allow for potential predictive modeling, the velocity vs. time data is presented in Table 3 for the four spheres used in this experiment.  Position vs. time data is omitted to encourage modeling attempts to compare predicted and measured velocity rather than position because a wider array of models all produce an apparent agreement with the position.

Table 3: Velocity vs. time data for four spheres.  The data point corresponding to the first frame showing the sphere in the glycerine is shown in bold.  All digits shown may not be significant, but are shown to allow comparisons with modeling, including more accurate computations of RMS errors for different predictive models.

Even though this experiment was performed with a dedicated camera, many smartphones have comparable frame rates, with phones being released as early as 2012 being able to record at 120 fps with equal or higher resolution.  The accuracy of this experiment depends on due experimental care rather than expensive equipment.  The two layers of liquid allow quantitative observations of both positive and negative accelerations in each trial.  The frames after the sphere transitioned between liquids were observed carefully, and the transition appears relatively “clean” in that canola oil is not observed being dragged significantly into the glycerine.  This is in contrast to dropping spheres from the air into liquids when an air bubble attaches to and follows the sphere into the liquid and affects the motion.

The uncertainty in the velocity determination of most data points in this experiment is between 0.5% and 2.0%, as determined from the uncertainties in the slope of the position vs. time.  One might think that greater accuracy might be obtained with some combination of higher frame rates and/or higher resolution.  However, experience has shown that once due care is exercised in video kinematics experiments as described in the method, the factor most limiting accuracy is the linearity of the mapping of pixels to distance in the light-sensing element of the camera itself.  Higher resolution and higher frame rates will not improve accuracy using a single linear calibration if the fundamental limitation is in the sensing element of the camera.  The accuracy potential of most cameras can be determined by dropping a lead sphere in the air over a distance of 0.5-0.75 m and using a least squares fit a quadratic of height vs. time to determine the acceleration of gravity.  Comparing trial variations and how the experimental value of g compares with the known value for a location suggest the accuracy potential of a given camera if due care is exercised in the experiment.  Most consumer cameras of reasonable quality provide accuracy potential from 0.5% to 2%.

Students will likely gain the most educational value by repeating an experiment substantially similar to the one described here.  Learning the due care to produce accurate data helps develop of useful laboratory skills.  However, sufficient data is also provided in this article to develop and test predictive models if a theoretical approach is preferred.  It would be instructive and useful to develop a model with the data from one trial and then use the other three trials to test the model.  For example, each fluid viscosity might be treated as an unknown, and the first trial used to determine the viscosity of each fluid by treating it as an adjustable parameter.  Then the other trials might be used to test the model by computing RMS differences between predictions and experiments using the model without any additional adjustable parameters.  Alternatively, models testing linear and quadratic dependence of drag force on velocity may be tried, using RMS differences between models and data to identify the better model (rather than visual appearance).

HG is a Junior Physics major attending the University of Georgia on a full tuition scholarship.  He is also a scholar in UGA’s CURO program, being funded for research in a laser lab on campus.  His research focuses on harmonic generation of lasers using ultrafast frequency combs to study molecular dynamics.  As a younger man, HG aspired to be a fisheries scientist and published several peer-reviewed papers, including the discovery of magnetoreception in three additional fish species.  He switched his major to Physics early in his first year of college, preferring a more quantitatively demanding science and being enamored in his first visit to a laser lab.  His alias, Harmonic Generation, is a double entendre, since both his parents are also physicists.

Understanding Buoyancy: The Limits of Archimedes

An Example of An Accurate Hooke’s Law Laboratory

Introduction to Pitot-Static Systems in Gliders

Intro to Physically Reasonable Waves on a String
3 replies

Guide to C++ Programming For Beginners
Scroll to top