This article is part of our student writer series. The writer Arman777 is an undergraduate physics student at METU

This is an introduction to cosmology for someone who has some knowledge of calculus and basic physics. In this tutorial, we will take a journey into the cosmos to study cornerstone ideas in cosmology and their derivations. Let’s begin our journey, by explaining the meaning of cosmology. Cosmology is the study of the origin, evolution, and eventual fate of the Universe. It comes from the Greek words –kosmos (world) and -logia (study of) [1].

Our exploration will start with the derivation of the Friedmann Equation. In the next chapters, we will try to understand the main elements that made our universe, the idea of dark matter and dark energy. After that we will go back in time to understand the origins of the Universe, we will study CMB (Cosmic Microwave Background), Baryogenesis, and Inflation.

Chapter 1- Derivation of The Friedmann Equation

In ancient times, our Greek ancestors looked up at the sky and wondered about our place in the universe. While observing the stars and planets, the Greeks developed a scientific approach to solving problems, leading to creating models of nature. The Greeks constructed conceptual models about the cosmos to explain what they observed in the sky [2].

In their cosmic model, the earth was in the center (Geocentric or Ptolemaic system), and other planets and stars were orbiting around the earth. 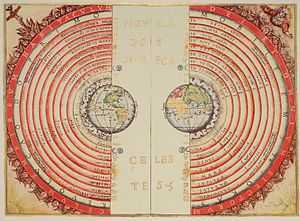 Fig. 1: Figure of the heavenly bodies, an illustration of the Ptolemaic geocentric system by Portuguese cosmographer and cartographer Bartolomeu Velho, 1568 (Bibliothèque Nationale, Paris) [3].

In 1929, Edwin Hubble discovered that the universe is expanding (before that in 1922 Alexander Friedmann put forward a set of equations that proposes that the universe might expand) [10]. Hubble observed that galaxies are moving away from us and surprisingly the further they are, the faster they move. Which we call, the Hubble’s Law. However, before introducing Hubble’s Law in detail, we should first understand the idea of “the expansion”. 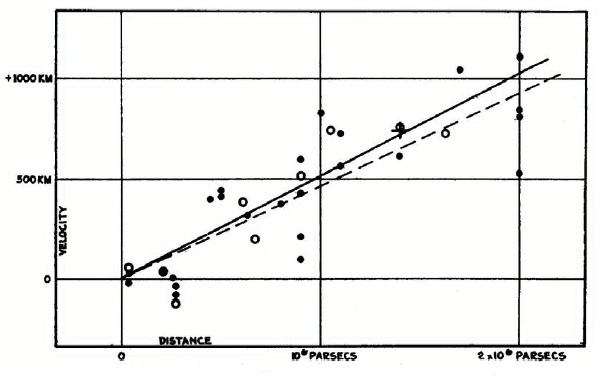 “The expansion” of the universe (universe means space in this context) is called the metric expansion of space. A metric defines the concept of distance, by stating in mathematical terms how distances between two nearby points in space are measured, in terms of the coordinate system. Metric expansion is mathematically modeled by the FLRW metric which we will discuss in the next chapter.

The metric expansion of space is an intrinsic expansion whereby the scale of space itself changes. It means that the early universe did not expand “into” anything and does not require space to exist “outside” the universe. Instead, space itself changed, carrying the early universe with it as space grew. This is a completely different kind of expansion than the expansions of explosions seen in daily life. It also seems to be a property of the entire universe, rather than a phenomenon that applies just to one part of the universe or can be observed from “outside” it.

In cosmology, we cannot use a ruler to measure metric expansion, because our ruler will also be expanding (extremely slowly) [12]. In other words, we can’t use the cartesian coordinate system to express the expansion of the universe. Instead, try to picture a coordinate system with the grid lines expanding along with all of the objects in the Universe. So as time passes the grid system will expand or contract, as do the galaxies embedded on the grid lines. We call this a comoving coordinate system. Only in this special coordinate system observers (called comoving observers) will see the universe in an isotropic way, including the CMB radiation. Non-comoving observers will see regions of sky systematically blue-shifted or red-shifted [13]. Meanwhile, we know that galaxies have some random motions (peculiar velocity) with respect to the coordinate system. However, in large scales, due to homogeneity and isotropy, peculiar velocity will not be important [14].

Now we can try to understand Hubble’s Law. Assume that the universe is homogeneous and isotropic. There are two galaxies, [itex]A[/itex] and [itex]B[/itex] embedded on the grid and suppose at [itex]t[/itex] galaxies have such position. The distance between the two galaxies will be;

Fig. 4: A fictitious grid of coordinates following in unison the expanding, or contracting, Universe. The two galaxies shown remain at the same lattice point. Their grid distance remains the same, but their real distance may evolve with time [15].

Since [itex]Δx[/itex] is constant, we can say that;

the distance between galaxies will increase linearly as [itex]t[/itex] gets larger.

Now let’s calculate the velocity of  [itex]B[/itex] relative to [itex]A[/itex],

Since [itex]Δx[/itex] doesn’t change with time;

We observe that [itex]Δx[/itex] can be canceled, since it can be set to an any value. Hence we can write;

And this ratio is what we called as Hubble parameter or expansion rate.

Current Hubble parameter can be calculated as;

Some Misconceptions About The Hubble’s Law

Where is the center of the Universe ?

From Hubble’s Law, we can see that the velocity of the galaxies with respect to us, depends on the distance that we observed. This observation may lead us to think that, we are at the center of the universe since most of the galaxies appear to be moving away from us.

Fig. 5: An observer on galaxy B sees that every other galaxy is moving away, and the further they are, the faster they move (Hubble’s Law).

Fig. 6: An observer on galaxy A sees that every other galaxy is moving away, and the further they are, the faster they move (Hubble’s Law).

(Arrows represent the velocity of the galaxies with respect to the Hubble’s Law, the magnitude of the arrows are proportional to galaxy velocities) [16]

But that’s not the real case. The observer on the galaxy [itex]B[/itex] and the galaxy [itex]A[/itex] will see the same thing from their perspective. Hence, we can’t talk about a real center because all observers will see that everything is moving away from them. It must be also true in the sense of the Copernicus Principle.

Is the universe expanding faster than the speed of light?

If we think more about Hubble’s Law, we can see that when we reach a certain distance it says that the object will reach the speed of light.

Where, [itex]c[/itex] is the speed of light. Hence, the distance will be;

Because of this reason, galaxies further than [itex]4500Mpc[/itex]  may seem to exceed the speed of light and there’s nothing wrong with it ( where the observable universe radius is [itex]28500Mpc[/itex] ). There are a couple of reasons behind it. In this model since the galaxies are embedded on the grid, the distance between galaxies is not expanding due to their velocity but space itself which is expanding, and it drags the galaxies with it. We can see the galaxies that are further than that distance since the light that is reaching us is coming from the past where the object was still within the limit of this distance [18]. Furthermore, special relativity is not violated, because it refers to the relative speeds of objects passing each other, and cannot be used to compare the relative speeds of distant objects [19]. The reason for this is, that in large cosmic scales space is curved but the theory is “special” in that, it only applies in the special case where the curvature of spacetime due to gravity is negligible [20].

In 1922, Alexander Friedmann proposed a set of equations that can describe the expansion of the universe [21]. He used general relativity to derive these equations but for simplicity, we will use the Newtonian approach and we will derive the same equation that Friedmann did.

The gravitational force between two massive objects can be described as; 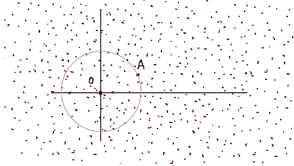 Consider a homogeneous and isotropic universe. There’s a particle [itex]A[/itex] (we can treat galaxies as particles in large scales and ignore their peculiar velocities) with a mass of [itex]m[/itex] and we want to find the force that acts on that particle due to other galaxies. Newton’s Shell theorem says, that in a frame of reference where everything is isotropic with respect to the origin, it doesn’t even have to be homogeneous. If we want to know what is the gravitational force exerted on a particle of mass [itex]m[/itex], then we can draw a sphere centered at the origin and going through the particle as shown in Fig.7. Assuming that all the particles in the sphere (where total mass is [itex]M[/itex] ) concentrated on the origin, [itex]O[/itex] and ignore all the mass in the universe farther away than [itex]m[/itex], from the origin because it’s the net force on [itex]A[/itex]  is null. Then the force exerted on [itex]A[/itex] can be calculated as the force due to a unique point mass located at [itex]O[/itex] [22].

In this case, the total force on the particle can be calculated as;

Where [itex]M[/itex]  is the total mass inside the sphere.

Let’s try to calculate the total energy of the particle [itex]A[/itex] .

Where [itex]KE[/itex] is the kinetic energy and [itex]PE[/itex]  is the gravitational potential energy of that particle.

We can divide both sides of the equation to [itex]m[/itex]  and multiply by [itex]2[/itex].

Instead of [itex]M[/itex] we can use the density of the particles inside the sphere,

Where, [itex]-2E/m=k [/itex]. This transition can be thought as changing the equation to relativity, from Newtonian mechanics and [itex]k[/itex] can be expressed as a curvature of space.

There are three possible values that [itex]E[/itex]  can take: positive, negative, or zero.

Fig. 8: Space-time histories for Friedmann’s cosmological models in which the spatial curvature of the universe is positive, zero, and negative (left to right) [24].

This is the Friedmann Equation without the cosmological constant.

Although Newtonian cosmology can reproduce the chief results derived from Einstein’s equations, it is essentially incomplete, for several reasons. We need general relativity to justify the neglect of all matter outside a sphere of radius [itex]r[/itex] in calculating the gravitational potential energy. We cannot use Newtonian mechanics when the medium itself consists of particles with relativistic local velocities [26]. Also in such large scales curvature of space becomes more important which it means we can’t use Newtonian mechanics as a fully correct approach.

In the next chapter, we will further investigate the Friedmann Equation. We will explore the FLRW metric, the fluid equation and we will solve the Friedmann equation for some models.

Next Chapter: A Journey Into the Cosmos – FLRW Metric and The Friedmann Equation

16-Where’s the center of the big bang? (http://www.astro.ucla.edu/~wright/nocenter.html)

18-Rothstein, D. (2016, February 10). Is the universe expanding faster of the speed of light? Retrieved from (http://curious.astro.cornell.edu/about-us/104-the-universe/cosmology-and-the-big-bang/expansion-of-the-universe/616-is-the-universe-expanding-faster-than-the-speed-of-light-intermediate)

25-Weinberg, S. (1972). Gravitation and cosmology: principles and applications of the general theory of relativity (p. 475).

I am an undergraduate physics student at METU.

Universe FAQ: Is there Evidence for the Big Bang?

Was the Early Universe in a Disordered State?

Intro to the Big Bang and Infinity Concepts
6 replies

The Birth of a Physics Textbook: An Author’s Journey
Scroll to top