The universe was not perfectly uniform when it started, some areas had a higher density than others. During the evolution of the universe, these areas of high density contained most of the matter and started forming galaxies where there was the highest concentration of matter. This large-scale structure (‘cosmic web’) connects the observed clusters of galaxies via a series of filaments. Figure 1 is a model of what this looks like. 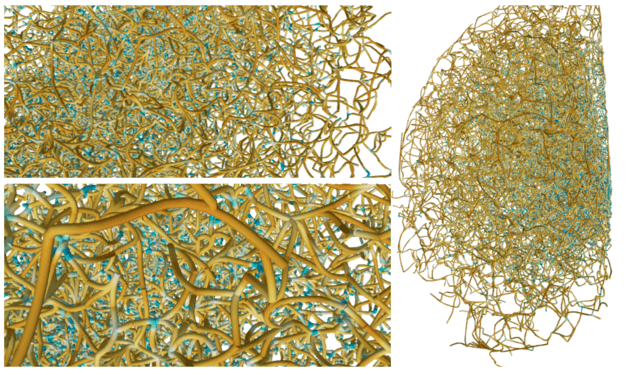 Figure 1: Skeleton of a cosmic web traced out by an algorithm run on a sample of observed galaxies. The far-right shows the complete web, the left images show close-up portions. Blue areas are points of higher density.

The cosmic web is a representation of the density of space and can be traced out with the observed distribution of galaxies, connecting those closest together. This is done with similar algorithms for both observations and simulations. The densest areas are the more massive, central galaxies that are located at the crossroads of multiple filaments (nodes), similar to the blue areas in figure 1. Other research has shown the mass of a galaxy increased with the number of connected filaments (“connectivity”). Recent research wanted to know whether the connectivity was related to star formation and whether it helped prevent star formation from happening.

Forming Stars, or Not

In order to accomplish this, scientists investigated observed and simulated galaxies that lay at the densest regions (nodes) within the cosmic web. Observed galaxies were taken from the SDSS (The Sloan Digital Sky Survey) data release and number ~ 7×105. Galaxies from two independent simulations were compared to the observations to see if the same general trends hold, but direct comparison is difficult because simulations have significantly smaller sample sizes. This is due to the computational cost involved with simulating large amounts of galaxies. 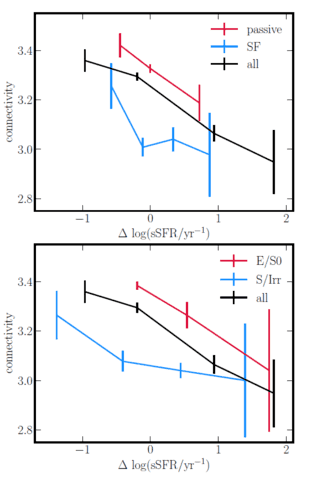 This is counterintuitive; filaments can funnel cold gas into the galaxy, which could be expected to trigger star formation. Scientists provide a number of different explanations for this. It could be that the gas received from multiple filaments could be chaotic, instead of the more uniform funneling that a single filament would provide. Alternatively, it could be that the filaments may not be effective at feeding the inner regions of a galaxy that would form stars, or that they are experiencing fewer mergers that are mixing less gas. Whatever the explanation, scientists have shown that more connectivity means less star formation.

Finally, researchers investigated what impact connectivity had on AGN (active galactic nucleus) activity. Feedback from AGN is important in galaxy formation as it assists transition a galaxy from being new and star-forming to a passive old age. AGN gives off vast amounts of energy that can drive star-forming gas out of the galaxy and quench star formation. To link AGN activity and connectivity, scientists compared two similar simulations: one with AGN and one without. They found that AGN was more efficient at quenching star formation when they were in galaxies with high connectivity.   The AGN were able to give off more energy to stop star formation as they were fed more material.

Researchers showed that connectivity is an important factor in galaxy formation, as it affects when stars will stop forming, as well as the total mass and morphology of a galaxy in both observations and simulations. The evolution of galaxies is impossible to observe as it takes many millions of years, however, any information we can gather from work such as this helps us understand the universe.

Can We Tell Whether the Universe Is Rotating?

Is the Universe a Black Hole?
1 reply

Universe FAQ: Is there Evidence for the Big Bang?
Scroll to top