This Insight article is the continuation of the first article, Simple Python Debugging with Pdb: Part 1.
In this article, let’s look at another important capability of debuggers: breakpoints. When you set a breakpoint in a program, the debugger executes all of the code up to the breakpoint, and then halts. This allows you to inspect variables at that point in the program.
To set a breakpoint, use the Pdb command b or break, followed by the line where you want the breakpoint. It’s helpful to press l (lowercase L) or ll to list (or longlist) your program code with line numbers, as I have done in the following screenshot. The l and ll commands were discussed in the previous Insight article. In this screenshot, the command b 8 means that I’m setting a breakpoint at line 8. 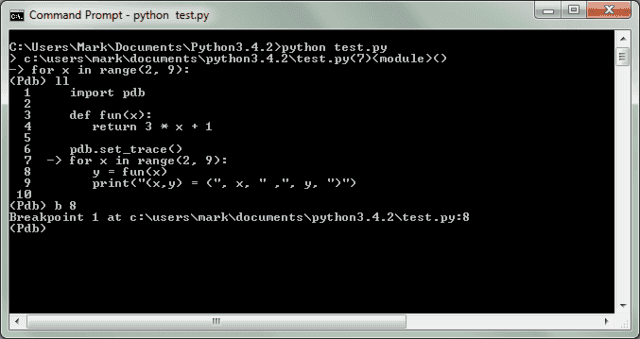 Instead of single-stepping through the code using n or s (next or step) as I did in the previous article, we can use the c (or cont or continue) command to execute code until we reach a breakpoint. The next screenshot shows the result of pressing c — execution stops at the line with y = fun(x)  on line 8, which is where I set the breakpoint. 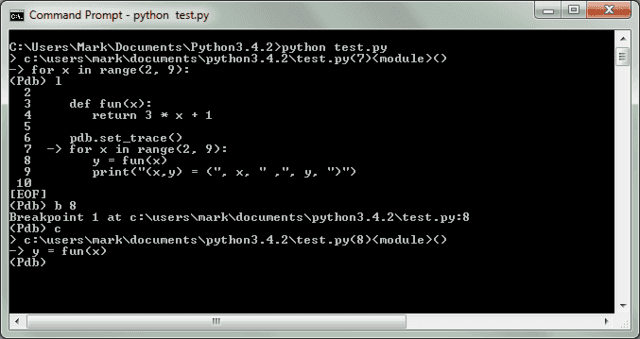 Pressing c again causes the print() statement to execute, and then starts another iteration of the for loop. Execution stops for the second time at line 8.
You can also set a breakpoint to be triggered conditionally, by adding a logical condition after the line number. I’m going to clear (cl or clear) the breakpoint I set at line 8, using the command cl 1. This was the first breakpoint I set, so its number is 1. Then I’m going to set a new breakpoint inside the function fun(), but only after the expression to be returned is larger than 20.
To do this I use the command b 4, 3 * x + 1 > 20. This command means, “set a breakpoint at line 4, and trigger it when 3 * x + 1 is larger than 20.” Note that you must use a comma between the line number (4) and the logical expression 3 * x + 1 > 20 . 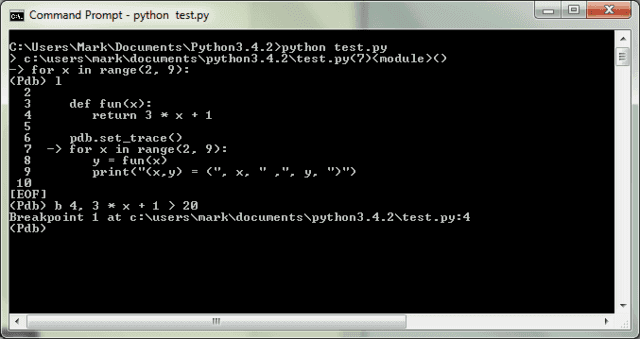 After setting the breakpoint and the logical condition, I’ll press c to continue execution until the breakpoint is hit. As you can see in the following screenshot, my program has processed x values of 2, 3, 4, 5, and 6, and has stopped inside the fun() function when x is 7, and 3 * x + 1 is 21, the first value that was larger than 20. 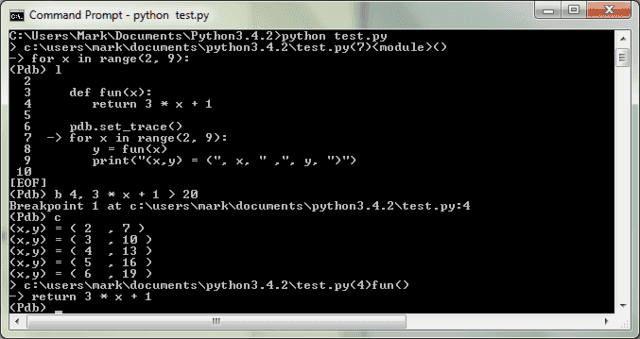 Former college mathematics professor for 19 years; taught a variety of programming languages. Former technical writer for 15 years at a large software firm headquartered in Redmond, WA. Current associate faculty at a nearby community college, teaching classes in C++ and computer architecture/assembly language.
I enjoy traipsing around off-trail in Olympic National Park, as well as riding and tinkering with my four motorcycles.

Is the Universe a Black Hole?
Scroll to top