Two of my favorite areas of study are linear algebra and computer programming. In this article I combine these areas by using Python to confirm that a given matrix satisfies the Cayley-Hamilton theorem. The theorem due to Arthur Cayley and William Hamilton states that if ##f(\lambda) = \lambda^n + c_{n-1}\lambda^{n-1} + \dots + c_1\lambda + c_0## is the characteristic polynomial for a square matrix A , then A is a solution to this characteristic equation. That is, ##f(A) = A^n + c_{n-1}A^{n-1} + \dots + c_1A + c_0I = 0##. Here I is the identity matrix of order n, 0 is the zero matrix, also of order n.

The following snippet defines the matrix M, and calls the charpoly() method to get the characteristic polynomial for M. It also uses the rank() method to set a constant, MATSIZE, to the number of non-zero rows in the matrix. Letting the program determine the size of the matrix means that I can change the matrix definition without having to change any hard-coded “magic” numbers anywhere else in the program.

(Yes, I know that “lamda” is misspelled. Python already has a keyword named lambda, so the name has to be altered slightly.) When the code snippet above is executed, the last line displays the following:

From the above, you can see that the characteristic polynomial for this matrix is ##f(\lambda) = \lambda^3 – 7\lambda^2 + 11\lambda – 5##.  The domain value, ‘ZZ’, indicates the set of numbers that can be used in polynomial calculations.

To construct the characteristic polynomial as a function of the matrix M, we use another SymPy method — terms(). This method returns a Python list object that contains all of the nonzero terms of the given polynomial.

The returned list contains tuples, one for each non-zero term of the polynomial. Each tuple contains the exponent on the term and the coefficient of that term. The exponent part is also a tuple, to account for the possibility of a polynomial in two or more variables. Because our polynomial uses only a single variable, each exponent tuple is a singleton.

The index-0 element, ((3, ), 1), corresponds to the ##\lambda^3## term of the characteristic polynomial. The remaining list elements correspond to the lower-degree terms in this polynomial.

Now that we have a list that contains the exponent and coefficient for each term of the polynomial, the next step is to extract them and place them in separate lists.

Extracting the coefficients of the characteristic polynomial

For each tuple in the terms list, the item at index 1 contains the coefficient of a given term. The coefficient of the i-th term of a list named poly is poly[i][1]. The function shown below extracts the coefficients and returns them as a list.  The Complete Python Code section contains a fully-commented version of this code.

Rather than use a for loop to populate coefficients, I am using list comprehension, a more “Pythonic” technique. For each top-level tuple in the list of exponents and coefficients, getCoeffs() extracts each coefficient and adds it to coefficients. A call to this function looks like this:

Extracting the exponents of the characteristic polynomial

The function shown below extracts the exponents and returns them in a list.

The Complete Python Code section contains a fully-commented version of this function, including a call to it.

In the snippet above, I is the identity matrix of order MATSIZE, the constant that represents the number of nonzero rows of the given matrix.

The program also generates a string that represents the expanded form of the characteristic polynomial of this article, which looks like this.

Verifying that the matrix satisfies Cayley-Hamilton

If the matrix product Result is equal to the zero matrix, then we have verified that this matrix is a solution to its characteristic polynomial equation.

When I run the program describe in this article, the IDLE shell displays the following results. The next section contains the code for the complete program. 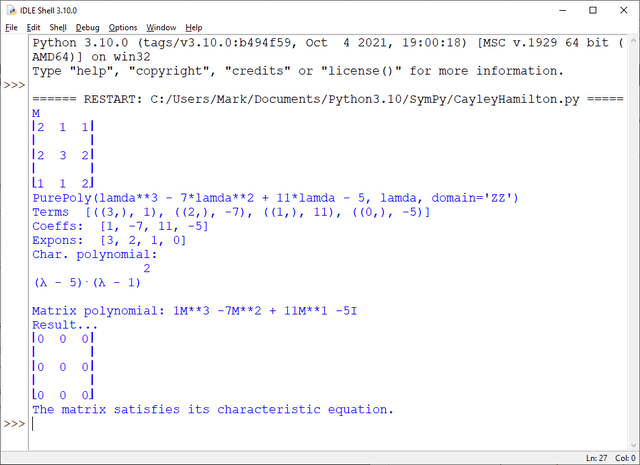 I’m running Python 3.10 and SymPy 1.9 in IDLE, the integrated development environment that comes with Python.

Former college mathematics professor for 19 years where I also taught a variety of programming languages, including Fortran, Modula-2, C, and C++. Former technical writer for 15 years at a large software firm headquartered in Redmond, WA. Current associate faculty at a nearby community college, teaching classes in C++ and computer architecture/assembly language.
I enjoy traipsing around off-trail in Olympic National Park and the North Cascades and elsewhere, as well as riding and tinkering with my four motorcycles.

In High School and Want to Do Advanced Mathematics?

How to Self Study Linear Algebra for Students

What Are Eigenvectors and Eigenvalues in Math?
0 replies

An Introduction to Theorema Primum
Scroll to top