Being a somewhat geeky Maths ‘nerd’, I spent days leading up to Valentine’s day trying to find a Maths function appropriate to the day. In the end, I did not find an appropriate single function but (perhaps aptly enough) a pair: function and inverse function. It occurred to me that these provide a good opportunity to illustrate a number of simple mathematical transformations involving reflections in the x-axis, y-axis, and both x-axis and y-axis. Whilst the inverse function itself illustrates reflection in the line y=x.

The Function (and its Inverse)

So here is the pair of graphs I initially settled upon: $$y=-x(x-4)$$ and $$x=-y(y-4).$$ As can be seen, there is some semblance of a heart shape formed by the function and its inverse. Perhaps not quite what Valentine card designers would be looking for! 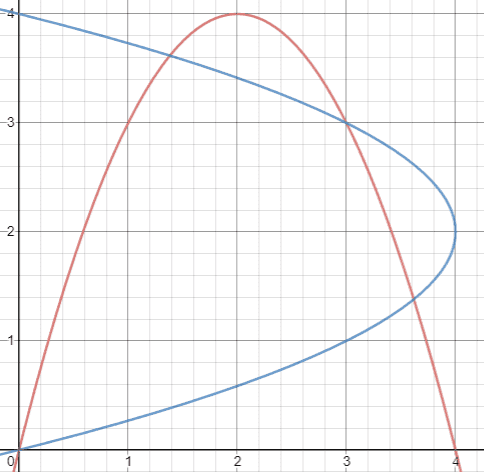 It intrigued me to note that this particular function and its inverse have 4 points of intersection. Two of these are solvable by simple inspection. For the other pair, since we are dealing with a quadratic and a square root function, we end up needing to solve a polynomial of order 4: $$y=-x(x-4)=y(y-4)(-y(y-4)-4),$$ or $$-y^4+8y^3-20y^2+15y=0$$. Since such a task is well out of my mathematical reach,  I submitted the equations (as a simultaneous pair) to Wolfram Alpha obtaining some interesting solutions: 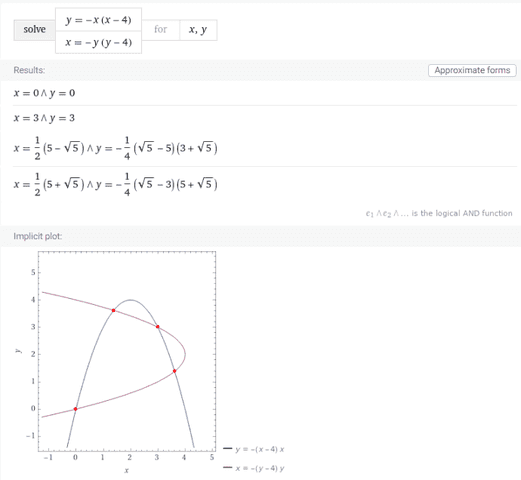 It should be clear from the graph that we expect the solutions to be symmetrical about the line y=x so it is interesting that WA presents the y-values in a somewhat complicated form. The y-value of the first solution should correspond (and does as the reader may easily verify) with the x-value of the second and vv. 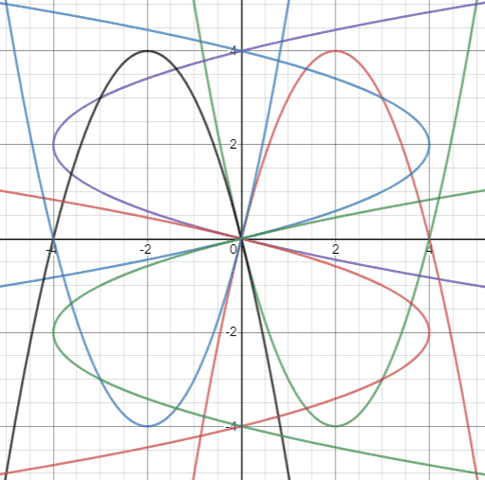 As can be seen, we end up with a ‘design’ that has several different lines of symmetry. In addition to those mentioned above, we seem to have somehow ‘inherited”  symmetry about the line y=-x although that was not a specific part of the design process outlined above. The reader may note there are ‘big hearts’ as well as ‘small hearts’ in the graphic. For example, the parabola with a turning point (-2;4) in the second quadrant will show a corresponding inverse function turning point (4;-2) in the fourth quadrant.  Each function/inverse pair has 4 points of intersection, 2 of which lie on the line y=x as is visually apparent. The other pair are obtained through the solution of a polynomial order 4 as we explained and illustrated earlier (the solution set includes the pair on the line y=x leading to 4 points of intersection as we might expect from solving a ‘quartic’ equation).

This set of functions displays either one or two points of intersection for each function/inverse pair. All of them (as for the -x(x-4) set) have a solution at (0;0) and the second solution(s) (for the parabolas with turning points in quadrants 2 and 4 are at (2;2) and (-2;-2). The parabolas with turning points in quadrants 1 and 3 only intersect their inverse function partners at (0;0).  The graphic displays similar symmetry to the first but (at least to the author’s eye) has a more ‘clean-cut’ appearance on account of there being fewer points of intersection.  A very ‘unromantic’ perception perhaps since there are no hearts in this graphic! 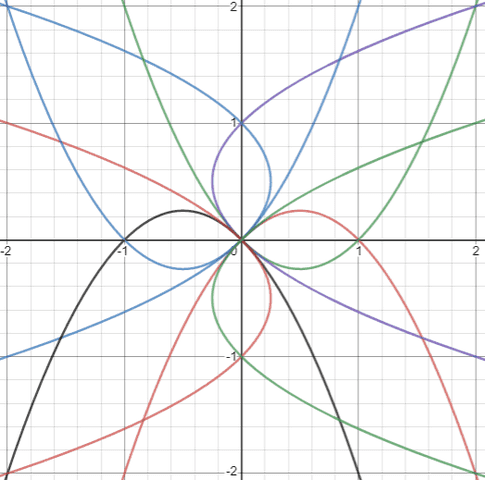 In this set of functions, the parabolas with turning points in quadrants 1 and 3 only intersect their inverse functions along the line y=x at points (2;2) and (-2;-2) respectively. As usual, all parabolas/inverses have a point of intersection at the origin. The parabolas with turning points in quadrants 2 and 4 have four points of intersection with their inverses leading to ‘hidden’ heart shapes in the graphic below. Consider for example the parabola with a turning point at (1.5;-2.25) and its inverse with a turning point at (-2.25;1.5). Function meets inverse at (0;0) and (4;4)  forming the heart shape. If the reader traces these curves, it will become apparent that there are two further points of intersection. 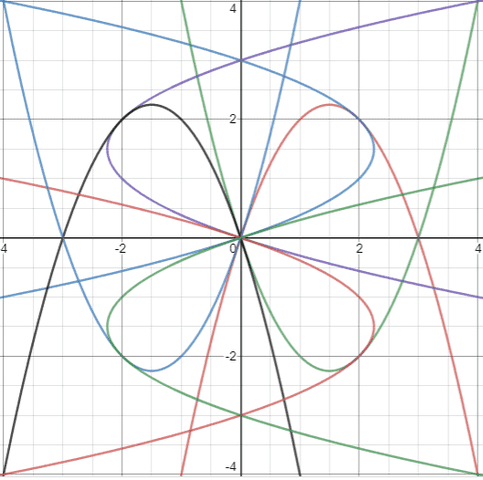 We may pose the question under what particular circumstances do we get heart-shaped graphics as distinct from others that do not display any such characteristic? Mathematically we are asking when do graphs of the form y=-x(x-k) have 4 points of intersection with their corresponding inverse functions. To answer this question we submit a literal equation to Wolfram Alpha – by way of requesting a solution to the simultaneous pair y=-x(x-k) and x=-y(y-k):

The solution above contains a quadratic in k under the square root sign. Hence we determine where there will be real solutions (apart from x=0 and x=k-1) by solving the inequality: $$k^2-2k-3 \ge 0$$. Happily the quadratic factorises easily as (k-3)(k+1) and so we quickly obtain the solution: $$k \ge 3,$$ or $$k \le{-1}.$$ It should now be apparent why we selected values of k=3 and k=1 for two of our examples above. These are boundary values of the above quadratic.

Given k=3, two of the “set” will actually have a k-value of -3  and hence fall in the region where we expect 4 points of intersection and heart shapes. As described earlier, these ‘hidden’ hearts can be found in the graphic illustrating k=3 and derivatives.

In this case, the k value is either 1/2 or -1/2 and both are in the region where we do not expect the graphs to intercept their inverses except along the line y=x. In fact, this holds for all fractional values of k – there is nothing particularly unique about k=1/2. 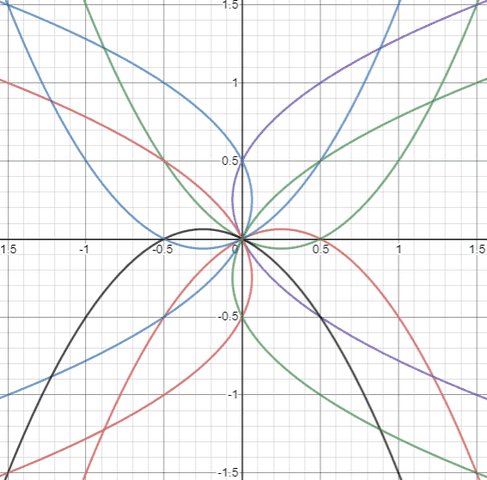 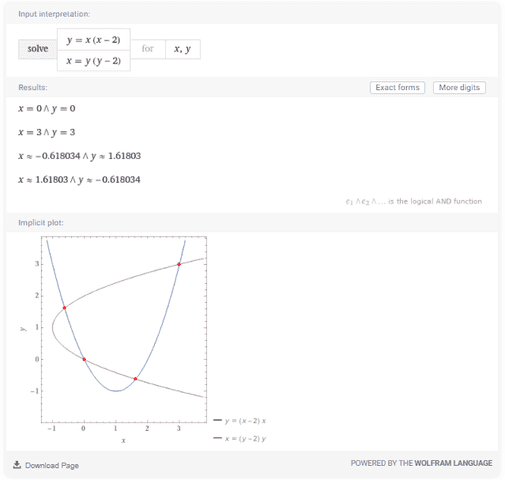 In this article, we have examined various sets of functions based around the ‘generic’ function  y=-x(x-k). Whilst the ‘quest’ for heart-shaped graphics might appear a little frivolous, it did give rise to some interesting Maths in respect of determining the points of intersection of parabolas and their inverse functions. We also determined the particular conditions under which the characteristic heart-shaped graphics arise. We hope that at the very least the article provides some good ideas for student exercises involving function reflections and inverses.

Seeing as the article began with a ‘proto-type heart-shaped design, we will end with one which incorporates various aspects of the theory discussed in the article. Namely the set of graphs based around y=-x(x-2). We shall leave the reader to judge whether or not this final graphic will cut any ice with Valentine card designers! 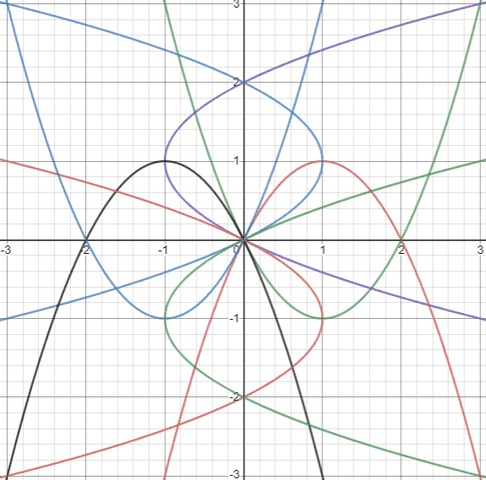 What is Integration By Parts? A 5 Minute Introduction

Trials and Tribulations of a Physicist who Became a Math Geek

The Electric Field Seen by an Observer: A Relativistic Calculation with Ten...
Scroll to top