Uranus spins on its side. Uranus has an obliquity (tilt) of 98º, making its axis of rotation closer to the ecliptic plane than any other planet. It is not known how it got this peculiar tilt.

Conventional wisdom over many years has been that one or more giant impacts must have turned Uranus onto its side when it was very young and giant impacts were common. Scientists outline four potential problems with this theory: If Uranus was impacted many times but Neptune was not, it would be expected their rotation rates would differ significantly. The reason being, some of the impacts may have speeded up or slowed down the rotation of Uranus. A day on Uranus and Neptune only differs by 6% (17.2 hours vs.16.2 hours, respectively). Giant impacts would disrupt the satellites orbiting Uranus. If this were true, researchers argue, the mass of all the moons of Uranus would be lower than expected. However, it is found Uranus has the “appropriate” amount, of moons. It is extremely hard to design one impactor large enough to tilt Uranus. That does not mean multiple impacts are out of the question, but it is a challenging scenario to model. Giant impacts would have heated Uranus so much that a lot of the interior ice would have been sublimated to gas and ejected into space. If this occurred, the satellites of Uranus would be mostly ice, but they are mostly rock and only a little ice. Scientists propose a different way to tilt Uranus: spin-orbit resonance caused by a massive circumplanetary disk. To determine if this is possible, researchers simulated a young Uranus and Neptune evolving, each with a large orbiting disk of dust and gas.

Spin-Orbit Resonance What is It?

Resonance is when two periods are integer multiples of each other. Liken it to pushing a child on a swing. If they are pushed at the right period, the swing will go high but if they are pushed at other times, it will not be as much fun. An example of orbital resonance is Neptune and Pluto. Pluto orbits the sun twice for every three times Neptune orbits therefore, the orbit of Pluto is reasonably stable. Spin-orbit resonance is a type of secular resonance, meaning the precession of Uranus’ spin axis resonates with Uranus’ orbit. Orbital precession means that the orbit changes orientation over time, causing the pole to point in a different direction (figure 1).

Usually, precession happens way too slowly to resonate with orbits. For example, Earth takes 26000 years to process once but its orbital period is only one year. Scientific research, impart Uranus with spin-orbit resonance by increasing its precession, which is a result of having a circumplanetary disk. 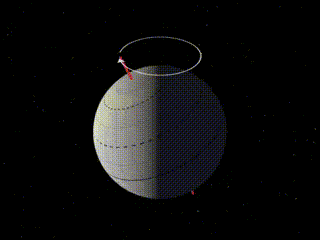 As the ice giants formed, they each had a circumplanetary disk. Disks are relatively short lived and only last for ~ 1 million years before the material either falls into the planet or forms a moon. Meaning Uranus only has one million years to turn on its side before the disk dissipates and the tilt is permanent.

To determine if different types of disks are capable of tilting Uranus or Neptune scientists built, computer models that capture the physical interactions of the disk and the planet. Three of the most important models are summarized here. 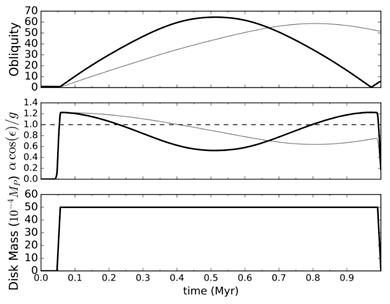 Obliquity changes are sensitive to the exact lifetime of the disk. The middle plot shows how close the system is to perfect resonance (dashed line). 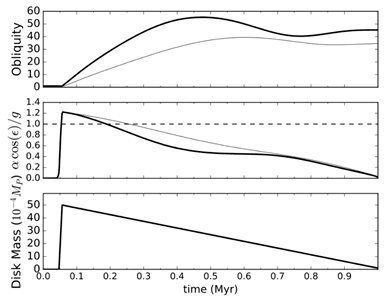 Figure 3: Results of the second model, in which the disk slowly dissipates over one million years (bottom). The obliquity of Uranus increases and then settles at approximately 45º (top).

Model 1: the simplest. It has a disk with constant mass for 1 million years before dissipating instantly. The result is shown in figure 2, where the obliquity (top panel) can be seen changing from 0º up to ~ 65º and then back to 0º. Researchers find that a constant disk could cause Uranus to tilt, but it could just as easily undo the tilt, making it too unpredictable.

Model 2: contains a more realistic disk that slowly dissipates over one million years, as shown in figure 3 (bottom panel). The obliquity (top panel) reaches a maximum of ~ 55º and then settles to ~ 45º. A dissipating disk does a better job of keeping Uranus tilted, but 45º is not even half of the tilt seen today.

Model 3: the same as model 2, but Uranus grows in mass as material from the disk falls onto it, shown in figure 4. Here the obliquity (top panel) reaches a maximum of ~ 70º and settles to 60º once the disk is gone. This model gets closest to the current value of 98º but is still not enough of a tilt. 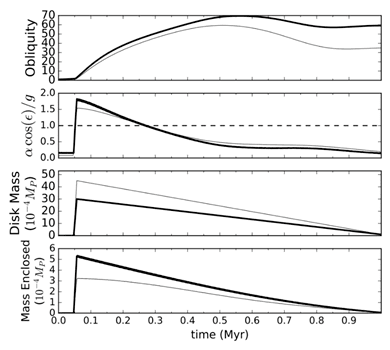 Figure 4: Result of the final model, which contains a slowly dissipating disk (3rd from top panel) and material falling onto Uranus. After one million years, the obliquity of Uranus settles at ~ 60º (top).

Scientists find that model 3 is the most realistic because it accurately captures orbital physics while plausibly tilting Uranus up to a maximum of 70º. It is concluded that this supports the hypothesis that spin-orbit resonance could be responsible for the high obliquity of Uranus. Researchers add that it would still take a massive impact to push Uranus from 70º up to 98º, but a single impact is significantly more likely than a series of giant impacts.

Scientists created many more spin-orbit models than shown here in their attempt to explain the evolution of Uranus and Neptune. Encouraging as it is that some of these models reproduce observed effects, understanding a process that occurred nearly five billion years ago, with only extremely limited observational data, will always be challenging.

Universe FAQ: Is there Evidence for the Big Bang?