This Insight takes a look at how it is possible to calculate the spin of Sagittarius A*, the supermassive black hole at the center of the Milky Way using some data and a few equations derived from Kerr metric. The following paper was used as a source-

Spin and mass of the nearest supermassive black hole by V I Dokuchaev
https://arxiv.org/abs/1306.2033

Extracts from the abstract-
‘Quasi-Periodic Oscillations (QPOs) of the hot plasma spots or clumps orbiting an accreting black hole contain information on the black hole mass and spin. 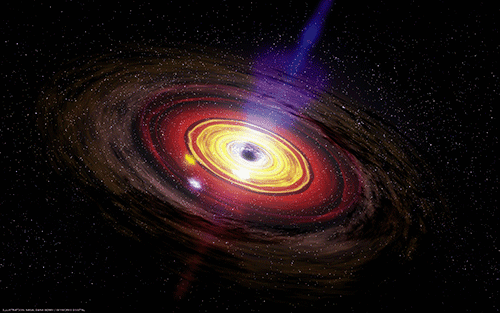 Interpretation of the known QPO data by dint of a signal modulation from the hot spots in the accreting plasma reveals the Kerr metric rotation parameter, a=0.65 ± 0.05, and mass, M=(4.2 ± 0.2)10⁶ M[itex]_⊙[/itex], of the supermassive black hole in the Galactic center. At the same time, the observed 11.5 min QPO period is identiﬁed with a period of the black hole event horizon rotation, and, respectively, the 19 min period is identiﬁed with a latitudinal oscillation period of hot spots in the accretion ﬂow..’

I was interested that this paper calculated the quantity of spin for the black hole at the center of our galaxy, which is nearly 26,000 light-years from Earth, using a handful of observations and calculations (note, the mass is calculated from the orbits of nearby stars). While the equations themselves are fairly simple, it’s worth first taking a look at Kerr metric (which deals with the curvature of spacetime due to gravity and spin) from which they are derived-

One of the most common expressions for Kerr metric is-

Note, multiply ω by c for SI units of rad/s. The reduction factor (or lapse function) can be described as the redshift and time dilation at a specific r taking into account dilation due to gravity and frame-dragging (for instance, the frame-dragging rate as observed from infinity would be ω but the proper frame dragging rate locally would be ω/α). Other geometric functions are given by-

where ϖ is often referred to as the reduced circumference (or the proper coordinate radius that takes into account frame dragging).

The black holes event horizons (outer and inner) are given by-

Angular velocity of the event horizons (as observed from infinity)-

where again, + defines the outer and − defines the inner horizon. Angular velocity (in its most simple form) required for a stable equatorial orbit at a specific r is given by-

This angular velocity describes the latitudinal oscillation of the hot spot or clump of plasma in the thin accretion disk (Note, Ωθ grows slightly less than ΩΦ the closer r is to the black hole, the orbit velocity is probably the same but due to slight movements in latitude, the angular velocity for Ωθ is less than ΩΦ which is a mathematical exact equatorial orbit, see fig. 6 in the paper). It is assumed that the brightest hot spots in the accretion ﬂow are located near the inner edge of the accretion disk, corresponding to the radius of the marginally stable circular orbit given by-

where rms would be used to calculate Ωθ. In both cases, the spin parameter is calculated to be a/M≈0.65 in order to match the orbit periods (T), as per fig. 8 in the paper. (Note, the equation for T is based on circumference/velocity where circ=2πϖ and v=Ωϖ where ϖ replaces what would normally be r).

While there are other signals for QPO’s around the black hole, these are the most significant when calculating the spin, the shortest stable orbit period in x-rays indicating the MSCO (inner edge of the accretion disk), and the shortest period in near-infrared which indicates matter falling into the black hole (note, the matter falling locally would be instantaneous but due to the deep gravity well, the matter would appear to make a few orbits of the event horizon in near-infrared before shifting deeper into radio waves). The results also correspond with the estimate of a≃0 − 0.6, from the millimeter VLBI observations of Sgr A*.

Other useful calculations from Kerr metric-

which is equivalent to-

Photon sphere (or more accurately, the photon circle in the equatorial plane, where + defines the prograde and − defines the retrograde orbit), 3M for a static black hole-

The Evolution of the Universe, Cosmic Web and Connections
3 replies

How to Better Define Information in Physics
Scroll to top