Black Holes (BH’s) are curious because of their mysterious nature and unknown properties. BH’s are not empty voids. They are astronomical objects with a gravitational pull so strong that nothing, not even light, can escape it. The “surface” of a black hole, called the event horizon (EH), defines the boundary where the escape velocity (for any particle) exceeds the speed of light, which is the speed limit of the cosmos. Thus, matter and radiation can fall into the event horizon, but they cannot escape.

BH’s can be divided into two main classes. Stellar-mass black holes, that form when a star with more than 20 solar masses comes to the end of its life. Another type being Super Massive Black Holes (SMBH’s) believed to exist in the nucleus of galaxies, although their origin is not well understood. There is also the SMBH at the centre of the Milky Way, which is known as Sagittarius A* (Sgr A*).

Once created, black holes can grow by accreting the surrounding matter, including gas coming from neighbouring stars and even other black holes.
How are BH’s observed? They are observed indirectly through the flow they accrete and emit, also by the supersonic collimated jets they produce and by their gravitational influence in their surroundings.

The central region of the Milky Way galaxy has been observed in the very high energy (VHE) radiation regime by imaging atmospheric Cherenkov telescopes (IACT’s) for over a decade. Looking at the electromagnetic spectrum, when we say very high energy emission, we are talking about gamma rays with energies above 100 Giga electron volts (GeV).

Following years of observations with the Cherenkov telescopes, astronomers have measured VHE radiation coming from the central ~10 pc, (parsec, 1 pc 3.26 light-years) of our galaxy. This region encompasses the location of the SMBH Sgr A*. However, the angular resolution of the Cherenkov telescopes is not enough to pin down the actual origin of this VHE emission. And the golden questions here are: is the SMBH Sgr A* accelerating the energetic particles responsible for the observed VHE radiation? If so, what is the particle acceleration mechanism?

What is this radiation?

Electromagnetic radiation propagates through free space or through a material medium in the form of electromagnetic waves with several frequencies, such as radio waves, which have low frequency, and gamma rays, which correspond to the highest frequencies of the electromagnetic spectrum, with energies 1 million electron volts (MeV).

It is known that gamma rays can be produced by highly energetic protons and neutrons known as cosmic rays (CR). However, we are unsure where around the BH in Sgr A* these particles are produced and what mechanisms accelerate them. It is conjectured that CR acceleration may be caused by a process called magnetic reconnection. This occurs when two magnetic field lines in opposite directions approach each other. As the field directions are opposite, when they touch, the annihilation of the field occurs at the point of connection. However, they quickly reconnect changing their direction. For example, if they were initially oriented horizontally, after re-connection they would orient themselves vertically, thus changing the configuration of the magnetic fields and releasing energy into the system. This mechanism is responsible for converting magnetic energy into the kinetic energy of particles.
Do BH’s have magnetic fields? Yes, they do! The field is advected by the accreting matter that falls into it and the charged particles follow the field lines during the re-connection process.

How do we study this radiation?

In order to explain how the observed gamma-ray radiation is produced, scientists perform numerical simulations to model the accretion disk around the SMBH and estimate how much gamma-ray radiation is produced.
Besides the accretion flow around the BH, it is also necessary to simulate how the produced radiation escapes Sgr A*. Assuming that magnetic reconnection is the mechanism responsible for the acceleration of particles to high energies, scientists inject CR protons in re-connection regions. Figure 1 shows a map of gas density and the magnetic field intensity around the SMBH at a given instant of the simulation, (snapshot of the accretion flow evolution). 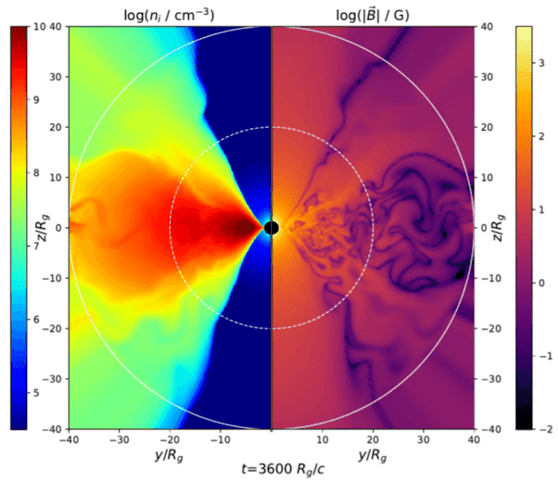 The cosmic rays (CR’s) are assumed to be produced in the inner region (inside the dashed white circle) and the resulting gamma-ray radiation is accounted at the spherical shell represented by the continuous white line.

The cosmic rays that are accelerated and escape from the inner region interact with the surrounding material resulting in radiative processes. When the accelerated CR’s interact with the gas, magnetic fields, and low energy radiation (soft photons) of the medium, they generate gamma rays, electrons and neutrinos. Also, the absorption of gamma rays was considered. This absorption is produced by the low energy photons of the medium, producing pairs of electrons and positrons (anti-electron). Inverse Compton (IC) scattering of these electrons was considered as well. In this last process, the electrons collide with the low energy photons converting them into gamma rays. The generated particles and photons will further interact with the components of the medium and produce new particles and so on. In short, the initial CR’s create a considerable number of new particles and photons, depending on how much material is available in the medium and this process is called cascading.
To know how these interactions, happen and what will be produced, one must know what is the probability of these CR’s and of the particles produced by them to interact with each of the components of the medium. The probability is measured by discovering the distance that a particle will travel before colliding with another and form new particles. This distance is called the mean free path (λ) (figure 2).

Finally, the produced particles and gamma-ray radiation are accounted for in the outer spherical shell of radius equal to the accretion disk size. 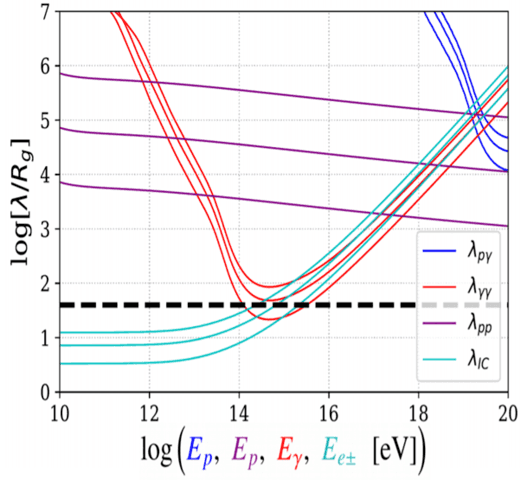 With the simulated environment and injection of CR’s accelerated by magnetic re-connection into the system, it is possible to calculate the emission of high energy gamma rays that escape the system and arrive at the Earth, that is the detected radiation flux. A possible set of flux models is displayed in figure 3, which correspond to a chosen fixed value for the BH mass accretion rate (a measure of how fast the BH is consuming the surrounding material). These possible flux models are plotted in green, purple and red colours. 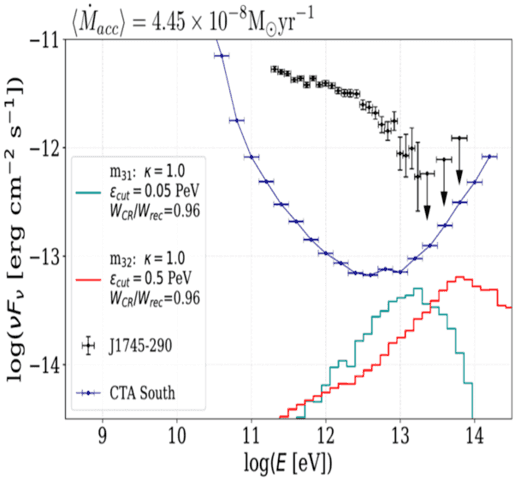 Figure 3: The calculated flux, i.e., the number of photons per unit time and per unit area, as a function of the energy being emitted by Sgr A* compared with the observed flux (black symbols).

Different combinations of parameters are expected according to the theoretical model. For example, the accretion rate, that is, how much matter falls per unit time into the BH and the characteristics of the accelerated CR’s.
As previously discussed, these theoretical emission models correspond to gamma rays produced exclusively within the accretion flow of Sgr A*, i.e. within the central ~10-4 pc around the supermassive BH (figure 1). The black points with error bars in figure 3 match the observed radiation flux in the direction of the galactic centre, reported by the H.E.S.S. telescopes. The observed data enclose a region of 10 pc around the galactic centre. Because of this, from the current observed data, it is not possible to establish the precise location of the radiation source (whether the flux is produced by the supermassive BH or by any other nearby astrophysical object).

As can be seen in figure 3, the green curve appears to fit the observed data very well. However, this model is unlikely to represent a physical situation. This is because the electron population implied from it would radiate synchrotron photons in the X-ray band thus exceeding the observed quiescent X-ray flux from the galactic centre. The models in purple and red on the other hand, do not have this inconsistency at X-ray energies and require a much smaller fraction of the available magnetic re-connection power. These models do not contribute significantly to the current observed data but are consistent with the H.ES.S. upper limits for the galactic centre.

We will soon have the Cherenkov Telescope Array (CTA), with an improved angular resolution and radiation flux sensitivity. The foreseen sensitivity of CTA is represented by the blue curve in figure 3. Thus, any astrophysical object radiating gamma rays with a flux above this sensitivity curve will in principle be detected by CTA. Particularly, the purple and red emission models discussed above can be tested by this future Cherenkov telescope.

The scientific team concluded that magnetic reconnection in the accretion flow of Sgr A* will produce VHE gamma rays, observable with CTA if the accretion rate onto the supermassive BH is larger than 10^-7 M⊙ per year. It is then expected that future CTA observations will provide valuable insight into CR acceleration and high energy processes occurring at the heart of the Milky Way Galaxy.

Will All Matter Be Converted to Photons?

Exploring the Math in Killing Fields and Black Holes