You may want to believe the article you read, or the video you saw, or you may be very proud of your PMM invention.   It can be very difficult to analyze what is inside the box to find the flaw. Maybe we can’t find it. Maybe nobody can find it.  If we can’t find the flaw, does that mean it will work? No, it does not. If you want to understand why read this article.

The PF guidelines explicitly list Perpetual Motion and Free Energy as forbidden topics.  Why? They are certainly popular topics. Almost every day we get new posts about articles that people read elsewhere, or from creative inventors.

The short answer is that a PMM would violate either conservation of energy, the 2nd law of thermodynamics, or both.   To a scientist or engineer, that is enough. Case closed, thread closed. But that may sound insufficient, dismissive, or even rude to the posters.  So a longer explanation follows.

The Meaning of impossible in Natural Language

The human spirit requires that we reject the word impossible.   Any coach in a locker room pep talk tells his team that it is possible for them to beat any other team today.   Our most celebrated inventors make the impossible possible. Delivery of a terminal prognosis to a patient is traumatic, so we frequently present undue optimism and say that survival is possible.

But there is a difference between what we might call Impossible (with a capital I) or merely impossible (small I meaning difficult).  Wikipedia says it well.  “Epistemic impossibility” describes things that absolutely cannot occur within our current formulation of the physical laws. This interpretation of the word “impossible” is what is intended in discussions of the impossibility of perpetual motion in a closed system.  For clarity we simply use Impossible with the capital I for A, and impossible with small i for B.

Energy has many forms, mechanical potential, kinetic, electric, chemical, nuclear, heat, light, and many more.  We convert one form of energy to other forms all the time. The bookkeeping of where the energy goes and in what forms can be difficult.  Nevertheless, the fact that energy is conserved is well proven by theory and by observation. Energy can not be created from anything.

In theory, we have The Principle of Least Action, and Noether’s Theorem that shows that the conservation of energy is a consequence of time translation symmetry.  There is even a quantum mechanical equivalent.

There is no wiggle room for you to challenge the conservation of energy.

The second law of thermodynamics states that the total entropy of an isolated system can never decrease over time, and is constant if and only if all processes are reversible.

The second law has a statistical foundation rather than theoretical one.  It is more difficult to understand than the conservation of energy. For one thing, entropy itself is a difficult concept for most people.  How entropy relates to PMMs is even more obscure. But to make an analogy that non-technical people can understand, we can look at a related principle of thermodynamics.   Heat spontaneously flows from the hot source to the cold source. Heat continuously spontaneously flowing the other way is Impossible.

Some PMMs can be analyzed using Carnot’s Theorem.   That is the link between PMMs and the 2nd Law.

The Engineer’s Tool, The Black Box

An engineer would analyze a PMM idea as follows.  Imagine the PMM to be enclosed in a black box. We can’t see inside, so we can’t see what the PMM is or what it does.

Energy conservation tells us that Energy In=Energy Out + Losses.   Statistical arguments similar to thermodynamics tell us that Losses are greater than zero for macro objects.  That is true no matter what it in the box. What is in the box doesn’t matter.

PMM thread posters always want us to examine the details of what is inside the box (i.e. the PMM) to find a logical flaw.  The engineer says, “Nope. What is in the box doesn’t matter.” That’s not being rude, it is being confident of our analysis methods and the laws of physics.

What if the box contained a battery?   Doesn’t that refute the analysis? That is where the word perpetual comes in.  A battery (or other energy storage) in the box could produce energy out with zero energy in, but only until the battery runs down.  It can not do it perpetually. Therefore, we could say that Energy In = Energy Out + Losses + Change in energy stored. Energy stored can not be infinite, hence the change in energy stored must eventually reduce to zero.

We should mention that in particle physics, energy losses are normally zero.  When we use a Feynman Diagram to describe any particle event, energy and momentum are conserved.   Losses due to friction, or air drag, or electrical resistance, happen only at the macro level, as do temperature and entropy.   PMMs are macro-level devices. A photon traveling in a vacuum is not a PMM.

The black box representation of a Carnot Heat Engine looks like this, except that the black box is shown as a circle.  The same arguments apply to the above black box. It doesn’t matter what’s in the box, the efficiency can not exceed Carnot’s efficiency. 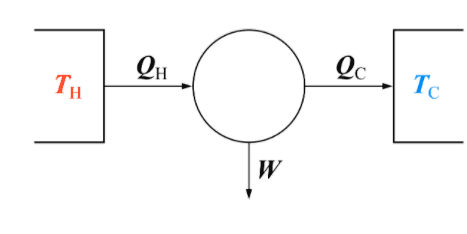 It is important to recognize that perpetual motion isn’t really a scientific term, so you won’t necessarily find a clear consensus in the scientific community about what it means. Part of that is an ambiguity between the terms “perpetual motion” and “perpetual motion machine,” which are sometimes used interchangeably but can be read differently.

The term “perpetual motion”, if read literally, sounds a lot like the second half of Newton’s First Law of motion; Objects in motion will continue in motion forever unless acted upon by an external force. In Newton’s time this was a profound realization, but today it is mundane. There are motions – celestial motions in particular – that are subject to very little external force, and as such can continue pretty much forever. For example, the orbit of the Earth around the sun will continue for billions of years, until the sun burns low, expands, and devours it. Even more long-lived; objects expelled from galaxies could theoretically continue traveling indefinitely — like this one: https://earthsky.org/space/black-hole-hurls-star-out-of-milky-way

A Type 1 Perpetual Motion Machine is one that violates the first law of thermodynamics(conservation of energy).

A Type 2 Perpetual Motion Machine is one that violates the second law of thermodynamics(entropy).

“Thermodynamics, an Engineering Approach”, by Cengel and Boles (now in its Eighth Edition) dedicates a few pages to the subject and uses these categorizations.

The Wikipedia article on the subject includes a third type: a device that experiences no friction or dissipative forces. That is what would differentiate between a long-traveling object and one that is truly “perpetual”; the example of a star expelled from the galaxy is still subject to the force of gravity and a small but non-zero amount of drag. It may be “perpetually” moving for practical purposes, but does not really qualify as the 3rd type. https://en.wikipedia.org/wiki/Perpetual_motion

The first type is the classic free energy machine and is the most common. Several common variants include:

Notice that the first set has no input energy at all! These could be considered a sub-type of Type 1, violating conservation of energy with input energy of exactly zero.

Type 2 PMMs are less common, but one typical variety is a heat pump driving a heat engine or using a lens to focus infrared radiation. These rely on one or both cycles violating Carnot’s efficiency to provide excess energy. Note that this is also a Type 1 PMM — gaining excess energy is nearly always the goal of PMMs, regardless of the specifics of how it is achieved. Internal combustion, steam engine or turbine with Impossibly high efficiency (above Carnot efficiency Betz’s law, etc.) would also be a violation of the 2nd law.

Identification and analysis of a PMM is actually relatively easy: all you need to do is identify the input and output energy and compare them. In thermodynamics, nearly every analysis is actually conservation of energy statement: Ein=Eout. The main pitfall, as the first set of devices shows, is believing there is an energy input when in fact there is none. For Type 2 PMMs you need to compare the device’s efficiency with the Carnot efficiency but still, the ultimate claim is still a first law violation. The energy analysis tells you it’s Impossible, but the thermodynamic cycle analysis is what tells you exactly why.

The way we look at it, free energy and PMMs are the same things.

Energy In = Energy Out + Losses.

Why are they Banned on PF?  The Long Answer

The simple reason why discussion of PMMs is banned on PF is that PF discusses accepted science only, and by definition, PMMs violate some laws of science. “But”, you might ask, “why don’t you try a relaxed-rules sandbox where anything can be discussed?” Well, we tried that early in PF’s existence and there were several problems:

The first two are practical reasons for the forum, but the 3rd and 4th are what might speak to PMM proponents. In 15+ years with PF, we interacted with many PMM “inventors” and we often continue to attempt engaging and teaching them via private message when moderating their activity. It’s rarely productive, in fact perhaps even impossible (not Impossible) to be productive. Some think the known laws of physics are wrong and some think they aren’t violating the laws of physics — but the two positions are functionally identical. Either way, almost all proponents of PMMs make their devices complicated enough that they are unable to analyze them, which is why they come to PF in the first place; They believe their device produces excess energy, they just can’t prove it and need our help. However, if they can’t point to a legitimate source of energy (“My device’s energy source is gravity”: nope!), then there’s no need to do a thorough analysis to prove it doesn’t work. Sometimes we do try to walk them through it to see how it goes. Almost always, the conversation seems productive until we get to the end, and then when the answer is reached, it must be wrong because we don’t understand their device and know what we’re talking about — or they disappear right before reaching the answer. The belief is stronger than the desire to learn. So the best we can do is to leave them with this: If the laws of physics are wrong, then we can’t help you analyze the device, since the laws of physics are all we know to apply. “So you’re on your own; your only real options are to invent the science yourself or better yet build a working prototype. Neither of which we can help you with here. Good luck and goodbye.”

A historical postscript: Most PMM “inventors” believe they’ve discovered/invented something new (or something is forgotten), despite how simple and obvious their devices are. None of them are actually much newer than the theory they violate. The Museum of Unworkable Devices provides some of that historical context and information about the common types of machines people have “invented” over and over again for the past several centuries: https://lockhaven.edu/~dsimanek/museum/unwork.htm

To circle back to the first paragraph of this article.  If we can’t find the flaw, does that mean your PMM will work? No.   We can use black-box analysis to be confident that PMMs can not exist and that what is in the box doesn’t matter.   That is why we summarily refuse to discuss what is in the box, or to even read your description or to view the video.  Such discussions are pointless and a waste of time.