Resistance to complex math seems to never die out.  I see it frequently in PF posts.  Often it takes the form of challenges rather than questions.  First challenge: Complex is just a mathematical trick that has nothing to do with the physics.  Second challenge: Everything that complex does can be accomplished by ordinary real numbers.   My intention in this article is to address those challenges.

Can We Ignore Complex?

Suppose we have a simple rule that says, “The answer is the sum of the vectors.”  The sum of vectors is obtained by adding the tail of each vector to the head of the previous vector.  Adding them up including the different directions of A and B is right, and doing it ignoring the directions is wrong.

That seems obvious and trivial with just two vectors, but the same principle applies in the picture below that I extracted from Richard Feynman’s famous book Q.E.D. about quantum electrodynamics.  The picture examines the reflection of light by a piece of glass.   You don’t need to understand the physics to appreciate the truth of the following. Adding up those little vectors head-to-tail including their directions (as shown in the picture) gives a sum that agrees with experimentally observed statistics of reflected light.  Adding them up ignoring their directions gives the wrong answer. 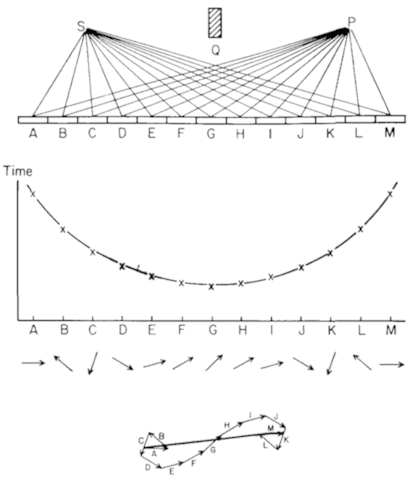 The point is this.  If you believe that you can simplify things in your mind and neglect the directions of those little vectors, you will come to the wrong answers.  Complex is more than a trick; it describes real physics.  You may not like that, but you must accept it to understand physics.

There are many examples where complexity is used in science and engineering.  Following are two simple ones.

Can We Achieve the Same Thing Without Complex?

The short answer to that is, “Yes you can, but it is more difficult.”  You can use coupled real equations, coupled real differential equations, trigonometry, or integral calculus to produce the same results.  However, a calculation that may take you seconds to complete using complex, could take hours or days by those alternate methods.  Your understanding of the concepts using alternate methods may be impaired by the tedium of the expressions. Consider the experience of a historically renowned engineer, who trumped Nikola Tesla and the other geniuses of that era, when he leapfrogged their mathematical abilities by embracing complex:

Steinmetz’s work revolutionized AC circuit theory and analysis, which had been carried out using complicated, time-consuming calculus-based methods. In the groundbreaking paper, “Complex Quantities and Their Use in Electrical Engineering”, presented at a July 1893 meeting published in the American Institute of Electrical Engineers (AIEE), Steinmetz simplified these complicated methods to “a simple problem of algebra”. — from Wikipedia: Charles Proteus Steinmetz

Here is a famous example, the famous Schrödinger Equation, where ##\bar\psi## is complex.

If we express  with A and B as real and imaginary components, then the following real simultaneous equations express the same thing.

If you think that the real form is simpler, good luck to you.   The bottom line is that all attempts to avoid complex by using equivalent real arithmetic are (in my opinion) harder, not easier.

I first learned of this history from the delightful book An Imaginary Tale, The Story of ##\sqrt{-1}## , by Paul J. Nahin.

All the way back to Archimedes, there was resistance to several mathematical concepts including infinity, irrational numbers, and even negative numbers.   To people who first learned arithmetic by the analogy of counting on their fingers, numbers are real positive things.   They could accept subtraction  5-4 as simply taking the real number 4 away from the real number 5.  But 4-5 was an absurdity.  After all, “Whoever heard of -1 goats?”

Gradually, the metaphor for numbers shifted.  Instead of counting on fingers, numbers could be considered as distances that could be measured with a ruler or a string. Obviously, the ruler could measure to the left or the right, so negative numbers seemed OK.  But given the acceptance of -1, ##\sqrt{-1}## or the square root of any negative number was still considered absurd.  There is no positive or negative number, that yields -1 when squared.

The ancients also knew how to solve the roots of cubic equations.  They knew that there must be three roots, but in some cases, they found one real root and two “nonsense” roots that required the square root of negative numbers.  Their reaction of the time was to throw up their hands in disgust and to declare those equations unsolvable.

It was not until 1797 when Caspar Wessel first discovered the validity and enormous simplifications possible by complex numbers (see below). Wessel was ignored, but in 1831 the more famous Carl Friedrich Gauss published his views that permitted complex to be accepted in academic circles.

But even in modern times, we still encounter resistance.  Indeed, the repeated challenges to complexity on PF are the inspiration for this Insights article.   I believe that the problem is related to language.  ##\sqrt{-1}## is associated with the words “real” “imaginary” and “complex”.  In natural language, real is associated with reality, whereas imaginary is associated with fantasy, and complex with complicated.  It shouldn’t be surprising that anyone with the slightest touch of math phobia would be warned away by the use of those words.   I compare it with the hugely unfortunate choice of words “big bang” in cosmology.  PF mentors are doomed to endlessly answer and re-answer misconceptions rooted in that phrase.  We can blame Leibniz for the word imaginary and Gauss for the word complex.  But Gauss himself recognized the language problem when he said,

“If this subject has hitherto been considered from the wrong viewpoint and thus enveloped in mystery and surrounded by darkness, it is largely an unsuitable terminology which should be blamed.  Had +1 -1 and ##\sqrt{-1}##  instead of being called positive, negative, and imaginary (or worse still impossible) unity, been given the names, say, of direct, inverse, and lateral unity, there would hardly have been any scope for such obscurity.” — Gauss

The great leap of insight that led Einstein to special relativity where others failed, had to do with the definition of simultaneity.  In an analogous fashion, Wessel was the first to think of ##\sqrt{-1}## as a rotation operator. Including Wessel’s innovation, we can think of the conceptual evolution regarding elementary numbers as (1) beginning with counting digits, then (2) advancing to arrows and rulers, and finally to (3) the concept that arrows can be rotated.

For rotations of intermediate angles, we can use the general expression ##a+ib## where a is the real part and b is the imaginary part.   It can also be written in polar form: magnitude c at angle ##\theta## using the notation ##c\angle\theta##.  Complex addition and subtraction are most easily visualized in rectangular form while multiplication and division are most easily visualized in polar form. I am also fond of thinking of repeated rotations where ##\theta## is a small angle, such as one degree.  Then rotation by any integer angle N degrees is equivalent to multiplication by ##(1\angle1)^N##.

In general, multiplication by ##c\angle\theta## simply changes the scale by c and rotates by angle ##\theta##. That was Wessel’s breakthrough.  If only we were taught in elementary school that multiplication is scaling plus rotation, then later told about the special case of real numbers where b=0, or ##\theta=0##.   The best inventions always seem obvious in hindsight. Such was the case here.  A rotation operator seems so simple and obvious to us, but those who preceded Wessel failed to see it.

Just think of i as the fifth basic arithmetic operator, right after, ##+-*/##.  I’ll say it again:  think of the basic arithmetic operators as addition, subtraction, multiplication, division, and rotation.  School children could be taught that from the beginning.  Hopefully, they might have a much easier time accepting complex when they get older.  Then, they could also learn that complex multiplication incorporates both scaling and rotation, so that the list of basic operators could be reduced to four once again.

But if we put it in polar form ##c\angle\theta## instead of rectangular ##a+ib## and consider each successive multiplication as a repeated rotation the answer is trivially ##(c\angle\theta)^9=c^9\angle(9\theta)##.

Complex math is most commonly associated with two dimensions.  But it can be used with any number of dimensions (but it is easiest with 2, 3, 4, 6 or 8 dimensions).  For example, three dimensional space coordinates can be expressed as ##x+iy+_jz## where ##i## and ##j## are mutually orthogonal unit vectors used as rotation operators. 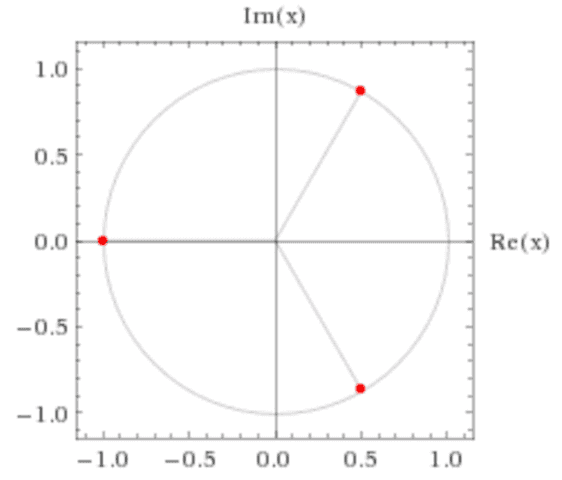 What are the roots of the cubic equation ##x^3=-1##?  The answer is simple and obvious to us, but it is one of the problems that bedeviled ancient mathematicians.  The roots are at ##\sqrt[3]{-1}##, but what does that mean?  It means there are three roots, ##-1##, ##1\angle 60##, and ##1\angle -60##.  Once again, Complex math makes it simple.  It becomes simpler still when we think of circles and rotation operators and shows the results graphically. To take a cube root, simply divide the circle into three equal parts.

The two complex roots above, are complex conjugates.  Conjugates have the same magnitude of rotation, but the opposite direction of rotation.  In rectangular coordinates, the conjugate of ##a+ib##  is ##a-ib##. In physics and engineering, complex quantities very often appear as complex conjugate pairs.  Now you know what that means.

So if you are one of those who strive to understand physics and engineering, but who has been resisting learning about complex math, cut it out.  You need to learn the basics of complex arithmetic. Even a very basic tutorial that will take you less than 30 minutes to master may be sufficient.   Here is one that I like.

Any student of quantum mechanics will encounter the famous Pauli matrices.  In the context of the above discussion about flipping and rotating, how would you characterize them?  How would you express them without complex numbers?

PF regular Hesch and DeanC, both contributed suggestions for this article.

Learn Complex and Irrational Exponents for the Layman

Things Which Can Go Wrong with Complex Numbers
15 replies

Interview with a Biophysicist: Andy Resnick
Scroll to top