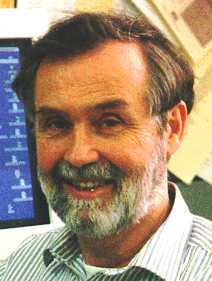 For those who don’t know the great David Hestenes, he is the inventor of the geometric algebra formalism of physics. Here we go!

The single most striking feature of Geometric Algebra (GA) is that it reduces electrodynamics to a single (relativistically invariant) “Maxwell’s equation:”

where F is the electromagnetic field, J is the charge current density and the differential operatorD turns out to be the same as the “Dirac operator” when the Dirac equation is formulated in GA.

Furthermore, when an inertial frame is selected, GA easily splits this single equation into the familiar set of four “Maxwell equations” formulated in standard vector algebra.

2) What are the best sources for physicists and graduate students to learn about geometric algebra and its applications?

These days the internet is the best resource for getting up to speed on just about anything. For GA the websites at Arizona State University [GA-ASU] and Cambridge University [GA-CamU] are recommended:

A comprehensive overview of GA in physics is given in a three paper follow-up to my 2002 Oersted Medal Lecture at [GA-ASU]:

Reforming the Mathematical Language of Physics,

3) Do you think undergrad students in physics should be taught geometric algebra? If so, can you recommend a good book for them?

Yes, but for introductory physics it should probably wait until someone writes a GA-based textbook. Some advantages of GA at this level are demonstrated in a GA Primer, available at [GA-ASU].

For advanced undergraduates I have written a textbook:

It contains the most thorough introduction to GA available anywhere, with many examples and exercises. It is the only mechanics book using completely coordinate-free methods. In particular, it employs spinors in extensive treatments of rotations, rotational dynamics and celestial mechanics without matrices, thus demonstrating that spinors are as useful in classical mechanics as they are in quantum mechanics. For anyone who wants to master GA through independent study, I recommend this book. Unfortunately, it is still exorbitantly priced, though thousands of copies have been sold.

A comprehensive treatment of GA for physicists is given in the book: Geometric Algebra for Physicists by Chris Doran and Anthony Lasenby, Cambridge U. Press. Slides for a lecture course on GA are available at [GA-CamU].

The book that started it all in 1966, Space Time Algebra, is still useful as a compact introduction for physicists. It has been reprinted in a second edition by Springer (2015) with a forward by Anthony Lasenby.

5) Can pure mathematicians benefit in learning geometric algebra? That is, if you’re interested in only mathematics by itself, is it still worth it?

Certainly. The evolution of GA is firmly grounded in the history of mathematics, especially in the seminal work if Hermann Grassmann, as documented in [GA-ASU]. Already GA and GC unifies a broader range of mathematics than any other mathematical system, and, of course, it facilitates applied mathematics through its close connections to physics. An extensive treatment of mathematical foundations is given in the monograph:

Clifford Algebra to Geometric Calculus, a unified language for mathematics and physics by D. Hestenes and G. Sobczyk (1984), now published by Springer.

With only minor adjustments in notation, GC generalizes the standard theory of differential forms to include spinor and tensor fields. It reduces differential and integral calculus on manifolds to properties of a single differential operator D, a natural generalization of the Dirac operator already recognized as fundamental in Maxwell’s equation.

7) Geometric algebra has found many applications. I have even seen applications in programming. Did you expect this kind of success? Are there any other unexpected applications that will be developed in the near future?

A big surprise came in 2000 with the formulation of Conformal Geometric Algebra, which enables direct composition and intersection of points, lines, planes and spheres. This proved to be a boon to computer graphics, as explained in the book:

Many people are now involved in creating software for GA computing.

Virtually anyone who prefers the term “Clifford algebra” to “Geometric algebra” is unaware of the power and broader range of applications given to GA by its various geometric interpretations. That is abundantly clear in the GA references already cited.

9) Do you think Geometric algebra would give a new perspective on quantum gravity that is not captured by current approaches?

Quantum gravity is not a subject but a problem: namely, to reconcile quantum mechanics, which is grounded in energy-momentum conservation laws, with General Relativity, which does not recognize those laws. I think the best shot at resolving this problem is with the GA-based Gauge Theory Gravity, already mentioned above.

10) What do you feel is the main problem with high school teaching of physics nowadays? How do you propose to solve this?

The main problem is to empower teachers already in the classroom with (1) professional support from a community of colleagues animated by (2) a common vision of good teaching, and (3) scientific support from physics departments in nearby colleges and universities.

I am pleased to report that the essential mechanism for a nationwide solution has already been created by physics teachers themselves, namely a community of practice called the American Modeling Teachers Association, with a membership or more than 2000. Each summer the AMTA organizes and conducts nearly 100 STEM teaching workshops for more than 2000 inservice teachers nationwide. The AMTA is a partner with the AAPT and has been formally recognized for the quality of its service by the APS 2014 Excellence in Physics Education Award. Unfortunately, as I opine in an AJP editorial (Am. J. Phys. 83 (2), February 2015), the AMTA has not received the support it needs and deserves from the physics community to drive rapid, deep and sustained STEM education reform for the nation.

11) Can you tell us a bit about Modeling Theory in education? How does it work? Where can interested teachers learn about it? Do you think it has been successful so far?

The Modeling Method of Instruction (adopted by the AMTA) has three basic elements: (1) course content is organized around a small set of basic scientific models; (2) students are introduced to each model through an instructional cycle that engages them in all aspects of formulating the model theoretically, testing it empirically and defending their conclusions with argument and evidence; (3) teachers guide students through each cycle with “modeling discourse” that is informed by difficulties that students may encounter and subtly directs their attention to salient points.

Foundations for a Modeling Theory of Cognition and Instruction are discussed in papers available in the Modeling section of [GA-ASU].

Read the next interview with physicist David J. Griffiths

Introduction to Astrophotography for Beginners
Scroll to top