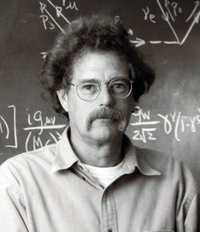 We are pleased to introduce David J. Griffiths. Professor Griffiths is one of the most successful physics textbook writers.  Odds are if you studied physics in college, you’ve used one of his textbooks. We are pleased and honored to obtain some of his insights on the quantum and academic world. Here we go!


High School(1960): my last two years were spent at Putney, a tiny boarding school on a farm in Vermont. This is relevant, because the framework for all the physics and mathematics I later learned was provided by Ed Shore, my teacher there. To this day, when I approach a physics problem or calculate an integral, I think about it in the language he taught me.

*[For more information you can visit his academic webpage here.]

In my experience there are two things over which an author has very little control: the cover, and the cost. Commercial publishers charge obscene prices for one reason: because they can. This is capitalism gone crazy: the person who chooses the product (the professor) is not the one who pays for it (the student), and none of the usual competitive constraints apply. I am pleased to say that in the case of my Quantum book I have extracted myself from Pearson, switching to Cambridge University Press, and the identical book now sells for less than half what Pearson was charging.

I like the idea of open source textbooks, although an enormous amount of work goes into the writing of a good book, and I do think there should be reasonable compensation to the author, both in fairness and as a disincentive for sloppiness. However, I detest the idea of customized “cut-and-paste” books. A good book (even—or perhaps especially—a physics textbook) has a coherent story line, and ripping out sections (or, as one publisher has done to me, removing all cross-references) is like taking the breadcrumbs out of Hansel and Gretel; it ruins the story. I realize, of course, that not every student is going to read every page, but the book itself should remain intact, as written.

What do you believe is the most difficult thing about teaching undergraduate quantum mechanics, and what is the biggest hurdle for the students trying to learn it?

The most difficult thing for the teacher to provide, and the student to develop, is a coherent framework for thinking about the subject. Classical mechanics is intuitively satisfying: state Newton’s second law and most people’s reaction is “Of course, why didn’t I think of that?” But quantum mechanics is radically counter-intuitive, and to learn the subject one needs a kind of skeleton to hang the various pieces on, and give some structure to the body.

As teachers, we tend to say too much. Because we know the subject is difficult to understand, we find ourselves, like a lawyer before a skeptical jury, presenting inconsistent arguments in the hope that one of them will stick. “Well, sometimes it behaves like a wave, and sometimes like a particle.” What is someone new to the subject supposed to make of a statement like that? Bohr had a nasty habit of elevating every half-baked idea to the status of a cosmic principle, and most instructors feel obliged to follow his lead, even if they do not themselves find the principle intelligible. What on earth does the Complementary Principle really mean? If it doesn’t make sense to you, then don’t teach it—it surely won’t make sense to your students. But it will leave them with the queasy feeling that something fishy is going on, and that’s precisely what we must try to avoid.

Has the way that we teach QM to undergraduates changed appreciably in the years since you first had to learn it as an undergrad yourself?

Yes.  In the early ’60’s the older professors could still remember their own struggles to adjust to this radical new way of thinking.  They took it for granted that we, too, had to be dragged kicking and screaming out of our comfortable classical playpen.  So they spent weeks at the beginning trying to persuade us that classical mechanics was fatally flawed.  After a month on the 19th century theory of blackbody radiation I could feel (if not really understand) Planck’s frustration.  But my generation didn’t need all this—we had heard about quantum mechanics since grammar school, and we were anxious to get down to business.  I was determined that if I ever taught the subject, Schrodinger’s equation would appear in the very first lecture.  [One of the problems with an overly historical approach to the subject is that quantum mechanics actually began with the photon, and the photon is a relativistic particle if there ever was one; it has no proper place in nonrelativistic quantum mechanics—it belongs to a quite different subject: quantum field theory.  If quantum mechanics had started with electron diffraction, then perhaps the historical route would make better sense.  But in point of fact that came much later.]

How much airtime should foundational/interpretational issues get in an intro/undergraduate course?

I think they do definitely belong—after all, this is what makes the subject so fascinating.  But there is a real danger in providing answers before the student is in a position to understand the questions.  So I prefer to address these issues later in the course.  The theory of spin, for instance, is the perfect place to discuss the meaning of the statistical interpretation—what do eigenvectors and eigenvalues have to do with the measurement process?  Bell’s theorem absolutely belongs, but probably at the end of the semester.

Quantum mechanics seems to attract more bad (oversimplified or misleading or overwrought or ….) popularizations than most other branches of physics. Why is this, and is there anything that can be done about it?

Indeed!  I think there are two villains here: (1) Physicists, who are (rightly) desperate to explain to the world the extraordinary, fascinating, and profound implications of quantum mechanics.  But they are afraid of intimidating an audience that gags at the sight of an equation; they want to convey the excitement without the substance.  So they resort to forced similes and grossly misleading metaphors (quantum tunneling means you can walk through walls—somehow it never works when I try it).  (2) Non-physicists who are intrigued by words like “uncertainty” and “indeterminacy,” but are too lazy to do the serious work it takes to understand them.  (I say “lazy,” not “incompetent,” because in my experience very few people are actually incapable of learning physics, if they set their mind to it—their problem is a short attention span.  As soon as it starts to require hard work, they lose interest.  That’s fine: physics is not for everyone.  But then don’t pretend you are genuinely interested in it.)

What is your advice to a layperson who is interested in QM but lacks the math background to take on a serious undergraduate course?

Learn the math.  You’ll be glad you did, whether you take the QM course or not.

How should aspects of how we teach [intro and intermediate] Classical Mechanics be modified to better prepare us for Quantum Mechanics? Which topics should be more emphasized? de-emphasized?

Are you currently writing (or planning to write) any new books? If so, in what areas?

Nope.  I’m working on a third edition of my Quantum book, and helping to edit a posthumous Quantum Field Theory book by my PhD advisor Sidney Coleman.  That’s enough for now.

What textbooks were your favorites when you were a student?

Purcell’s “Electricity and Magnetism” was my absolute favorite (but I didn’t encounter that until I was a graduate student).  I think the first edition of Resnick and Halliday was a good book—I wish they would reprint it.  It had no glossy colored pictures, but you could actually carry around it without a forklift; it had everything you needed to know—no more.  Gillespie’s “A Quantum Primer.”

Please describe your process for writing textbooks. It seems like a daunting task.

My books all began as lecture notes.  I rewrote them, and polished them, every time I taught the subject, and after six or seven iterations it was relatively easy to convert them to book form.  I could never write a book from scratch, without this incremental sequence of successive approximations.

As a student, did you tend to learn more from your professors’ lectures or from the textbooks you used?

With rare (but extraordinary) exceptions the lectures I attended as an undergraduate were unintelligible, so I guess I learned more from textbooks—but most of all by working lots and lots of problems.

That wraps up the interview. David J. Griffiths will consider answering direct follow-up questions but due to his busy schedule is unable to engage in back-and-forth discussion.

Read the next interview with physicist Clifford V. Johnson

The Unreasonable Effectiveness of the Popescu-Rohrlich Correlations

Can We See an Atom?

Learn The Basics of Rolling Motion
Scroll to top