Although rolling wheels are everywhere, when most people are asked “what is the axis of rotation of a wheel that rolls without slipping?”, they will answer “the axle”.  It is an intuitively obvious answer shared by 3/4 or more of the students in an introductory physics class.  It is also the wrong answer.  Here I describe an incremental teaching method that compels students to come face-to-face with their preconceptions concerning rolling motion.  I then offer some speculation on how these preconceptions could have taken hold and suggest ways to assess how well this method works.

I begin by defining the axis of rotation of a rigid body as the set of all points that are (instantaneously) at rest while all the other points rotate about it with angular speed ## \omega ##.  I use a meter stick mounted vertically and free to rotate about a nail going through a hole drilled at some distance from the midpoint (see figure below).

By pulling with a string below and above the pivot (solid and dashed lines) I establish the rule that relates the sense of rotation to the point of application of a force directed to the left: Clockwise ## \rightarrow ## below the pivot, counterclockwise ## \rightarrow ## above the pivot.  Although this seems to be a trivial observation that everyone can understand and accept intuitively, I write it on the board for the students to see and so that I can refer to it later.

I bring out yo-yo 1.  It is a discarded cable spool furnished with a side arm,  a short piece of PVC tubing attached to the center of the spool.  The other end of the short piece is attached, through an elbow joint, to a longer PVC piece hanging vertically.  The contraption is placed near the edge of the table with the side arm hanging straight down (see figure below).

First I pull on the string at a level below the tabletop which results in clockwise rotation of yo-yo 1.  According to the rule on the board, the force is exerted at a point below the pivot.  No problem with anyone.    Next, I raise the string to a point below the center of the wheel, but above the tabletop (dashed line).   Before I pull on the string, I remind the rule to the audience, Clockwise ## \rightarrow ## below the pivot, counterclockwise ## \rightarrow ## above the pivot.  When I pull, the rotation is counterclockwise.  I conclude that the pivot must be somewhere between the two positions.  Since theory predicts that it is at the point of contact, I place the string at the same level as the tabletop.   When I pull, there is no rotation.  Note: If you try this, be careful not to pull too hard, else the yo-yo will rotate about the vertical axis that has a non-zero lever arm.  A rubber mat makes the contactless less slippery.

After reinforcing the theory with the experiment it is time to use the theory to predict an outcome and verify the prediction by experiment.  If the IPOC is indeed the axis of rotation and if the entire wheel rotates about with angular speed ## \omega ##, then the center of mass will have linear speed ## V_{CM} = \omega R, ## where R is the radius of the wheel.  I predict that the top point on the rim of the wheel, which is diametrical across the point of contact, must have speed ## V_{top} = \omega (2R)=2 V_{CM}##.  To validate this prediction, I place a soda can on the table and a meter stick on top of the can parallel to the tabletop.  The 0 cm mark is lined up with the top of the can.  The starting point of both the center of the can and the edge of the meter stick are marked with a small object placed on the table.  I then push the meter stick forward so that the can roll without slipping on both the table and the meter stick.  I stop when the top of the can is at about the middle of the meter-stick and mark the new positions of the can’s center and the 0 cm mark.  It is clear that, in the same amount of time, the 0 cm mark is twice as far from the center of the can.  Therefore, the top point of the can move at twice the average speed of the center in agreement with the theory.

Are we there yet?

A theoretical prediction has been made and an experiment verified it.  I ask the students if they are now convinced that the POC is the axis of rotation and most of them are.   But wait, there is more! To see if they really, really got it, I bring out yo-yo 2.  This is another spool with string wrapped around the inner cylinder.   First I wrap the string so that it comes off the cylinder parallel to the table from the top (figure below left).  When I ask, an overwhelming percentage of students say that the cylinder will roll to the left, in the same direction as the pull.  Hurray, that is what happens when I pull.

I then flip yo-yo 2 over, so that now the string comes off the cylinder parallel to the table from the bottom (figure above, right).  When I ask, an overwhelming percentage of students say that the cylinder will roll to the right, in the opposite direction as the pull.  Alas, that is not what happens when I pull.  Some students audibly gasp when they see yo-yo 2 unexpectedly move to the left.  At this point, I feign exasperation, point to Clockwise ## \rightarrow ## below the pivot, counterclockwise ## \rightarrow ## above the pivot on the board, and ask, “Is the force not acting above the point of contact in both cases?   What more can I do to get you to accept that the point of contact is the axis of rotation?”

It is a good guess that the preconception at play here is the belief that the axis of rotation is always the center of the wheel.  This is coupled with the inability to transform from moving to a stationary frame consistently.   If one rides a bicycle and looks straight down at the front wheel, one sees a stationary axle with the wheel turning around it.  Specifically, the bottom of the tire touching the ground is seen moving backward while the top of the tire moving forward.  One also sees the ground rush past backward, but one dismisses this observation as merely an appearance because one “knows” who is “really” moving and it is not the ground.  Thus, one fails to realize that the point of contact of the tire and the ground are moving at the same speed and, therefore, that they are at rest with respect to each other.  So when one sees someone else riding a bicycle, one erroneously thinks that the point of contact is moving, just like it was moving when riding the bicycle.  The preconception arises as a result of incomplete and misinterpreted observation.

I also hypothesize that the preconception involved with yo-yo 2 arises from intuitive ideas adopted by the observation of unrolling toilet tissue or paper towels, items intimately familiar to everyone.  Imagine yo-yo 2 (the previous figure left) being a roll of toilet tissue in its dispenser.   If pulled as shown in the figure left, it will spin counterclockwise in place.  No problem here.  Now, if the roll is placed on a tabletop and then pulled, the intuitive prediction is that the roll will spin counterclockwise and as a result roll to the left. That the axis of the roll is no longer constrained to be immobile, thus any longer serving as the axis of rotation, is not taken into account.  Furthermore, when the experiment is performed, the result matches the prediction.  This validates in one’s mind not only the prediction but also the inappropriate analysis that led to it.  One then carries this faulty reasoning to “flipped over” yo-yo 2 (previous figure right.)  If pulled, “obviously” the string will unravel clockwise resulting in a translation of the roll to the right.  The new scientifically established rule on the board has apparently been set aside in favor of intuitive beliefs compiled after years of observing unwinding rolls of paper.

The effectiveness of the method can be quantified by using clickers to monitor the ebb and flow of student understanding as it develops.  I have not done that, but I test the persistence of the preconception by putting a multiple choice question on the next hourly test.

Example: A yo-yo has an inner diameter D and outer diameter 2D.  It is puled to the left by an inextensible string and rolls on a horizontal surface without slipping as shown in the figure below.  At some point in time, the string is moving with velocity v.  At that same time, what is the velocity of point P at the top of the outer wheel? 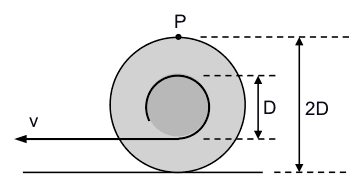 The correct answer is (A).  Students who answer (B) or (D) are likely to be confusing the rolling motion with the spin of a paper roll about a fixed axis.  Students who answer (C) or (D) are likely to be clinging to the idea that the axis of rotation is at the center of the yo-yo.  When I ask this question, 40%-50% of the students get it right.  Answer (B) comes second at about 20%.  I don’t have baseline data from a control group of students who have answered the question without the benefit of the demonstrations, but I believe the method works.

I am a retired university physics professor. I have done research in biological physics, mostly studying the magnetic and electronic properties at the active sites of biomolecules and their model complexes. I have also dabbled in Physics Education research.

Exploration into the Physics of Rainbows

What is the Moment of Inertia? A 10 Minute Introduction

What is Potential Energy? A 5 Minute Introduction