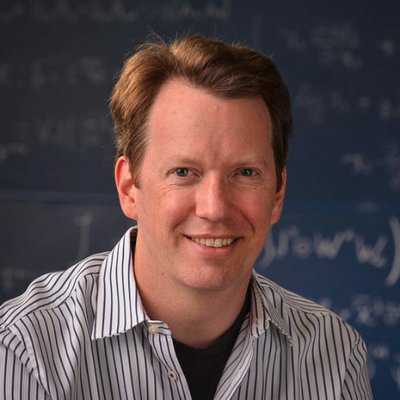 We are pleased to introduce Sean Carroll! Sean Carroll is a theoretical physicist at Caltech, specializing in cosmology and quantum mechanics. Sean has a new book out called The Big Picture, where the topic is “On the Origins of Life, Meaning, and the Universe Itself”.

I grew up in the suburbs outside Philadelphia, went to public schools, then was an undergraduate at Villanova University. (They won the national basketball championship my first year there, and then again this year, so there’s been a lot of reminiscing.) I was an astronomy major at Villanova, but realized that the kinds of things I liked to think about — black holes, particle physics, cosmology — was more physics than astronomy, so I applied to grad schools only in physics. I really wanted to go to Princeton or Harvard, but they wouldn’t let me in, but I was able to transfer my application at the last minute to astronomy at Harvard. That’s how I ended up having no degrees in physics, despite being a professional physicist.

At Harvard I worked with George Field, Alan Guth, and others on a grab-bag of different topics, and continued to do so when I moved to MIT for a postdoc. Violations of Lorentz invariance, dynamical triangulations, supergravity, topological defects, closed timelike curves, and so on. But the field was changing (early 1990’s), and when I then moved to the ITP in Santa Barbara for a second postdoc, it became clear that this kind of aimless wandering wasn’t going to keep me in physics forever. So I searched around for something that I was interested in that the rest of the world also found interesting. Fortunately, the universe handed me the perfect subject when in 1998 astronomers discovered that the universe was accelerating. Two of the main discoverers, Brian Schmidt and Adam Riess, had been my classmates at Harvard, and I had collaborated with Bill Press and Ed Turner on a big review article on the cosmological constant, so I was well-positioned to think hard about how to explain cosmic acceleration.

So that’s what I did, writing papers about quintessence, modified gravity, and interactions in the dark sector, along with my usual dabbling in other topics. I landed a faculty job at the University of Chicago, where in collaboration with Mark Trodden and others I wrote some highly-cited papers on dark energy and modified gravity.

Sadly, that wasn’t enough, and I was denied tenure at Chicago, for reasons that still remain mysterious to me. But I moved to Caltech, where I am now a research professor, and looked around for something different to specialize in. I’ve narrowed it down to two things, which I’m having enormous fun exploring. One is the foundations of quantum mechanics, especially how space and time might emerge from the wave function of the universe. The other is the evolution of entropy and complex structures as time goes on. I’ve written a few papers on that, and have some very interesting ones (in my mind, anyway) in the pipeline.

In The Big Picture I try to make the case that there is just one world, the natural world, which can be investigated by science — and that that’s okay, it’s not a reason for existential despair. This viewpoint, “naturalism,” is obviously promising that we will eventually answer a lot of questions that we currently cannot, from the origin of the universe to the origin of life and the nature of consciousness. So I do a tour of a lot of different areas of science, trying to show how they all fit together and there’s no need to expect any of these problems to be unsolvable.

When writing a book such as “The Big Picture” how do you balance the technicality of physics with the needed accessibility to the public?

You have to have an audience in mind, and in this case it’s one that is willing to think hard about some tricky issues, but doesn’t have any specific technical background or mathematical experience. So you have to pick and choose what you think is really worth explaining, and then try to be as honest as you can about those things. It’s tempting, when for example you’re discussing particle physics, just to put everything we know into the book, all of the particles and forces and so on. But if it’s not actually relevant to the bigger point of the book, you have to sit back and remove all the stuff that was just distracting from the main focus.

How did you come to name your book about the Higgs boson “The Particle at the End of the Universe“?

The point I wanted to emphasize about the Higgs boson was that it was the final piece of the Standard Model puzzle. Obviously there’s not a physical particle sitting there at the literal end of the universe, since the universe doesn’t (as far as we know) have an end. But the Higgs is located at the conceptual end of a certain part of the universe — the part described by the Standard Model. Its discovery represents the end of one era and the start of a new one.

You’ve become a science media icon after having appearances on “The Universe”, “Through the Wormhole” and the “Colbert Show”. Do you feel a responsibility in communicating the frontiers of physics to the general public?

I think the field as a whole has a responsibility to communicate with the public, though I don’t think that every individual scientist does. (There are some very good scientists who I’m just as happy to keep far away from the public.) Personally, I find it both enjoyable and rewarding. It’s fun to share some of the amazing things we’ve learned about the universe, and it certainly improves my own understanding of a topic when I work to make it comprehensible to a wide audience.

How has your experience with blogging shaped your view on science communication?

When it comes to science communication, I’m a believer in a diverse ecosystem: TV, magazines, websites, blogs, twitter, podcasts, books, and so on. Blogging is interesting because it’s personal, you have enough space to go into some detail, and you get immediate feedback on what you’ve said. The last of these is most important, because it forces you to be pretty sure you know what you’re talking about. If you just spout off, someone will call you on it pretty quickly.

What do you think about supersymmetry, and do you expect it to be found soon (and if yes, where)?

Before the LHC turned on, I gave odds of 60% that it would find supersymmetry (http://www.preposterousuniverse.com/blog/2008/08/04/what-will-the-lhc-find/). Since then it has turned on, albeit at somewhat lower energies than expected, and we haven’t seen any credible sign of susy yet. So I would put the odds that it will happen in the next five years at maybe 30%.

Of course, it’s completely possible that susy exists as part of nature, but is broken at a very high energy scale, so we’ll never see direct evidence for it at the LHC. I honestly wouldn’t be surprised either way; susy is an attractive idea, but we don’t know enough to say much with confidence.

What are your thoughts on the recent direct discovery of gravitational waves?

I think it’s fantastic. We certainly knew that gravitational waves existed, but this is a new tool we now have for investigating the universe in detail. It will be a tremendous boon for astronomy, and if things go well we will even be able to test general relativity in the strong-field regime near black-hole horizons. If things go *really* well, we’ll find some deviation from standard GR.

After The Higgs Boson and gravitational waves, where are you placing your bets for the next big discovery?

Those were both very likely to happen, and now that they’re in the bag I don’t know what else I would quite put in that category. Two things we’d certainly like to do are (1) directly detect the dark matter, and (2) detect primordial gravitational waves in the cosmic microwave background. I’d put maybe a 50% chance on the former in the next ten years, and a 10% chance in the latter. (Many models of inflationary cosmology predict gravitational waves, but at such a low amplitude that they would be hard to detect.)

Away from science what are some of your hobbies, favorite movies, books, places you’ve traveled?

Who were your heroes growing up and why?

I was never really a hero-worshipping kind of guy. There are plenty of people I admired for their accomplishments, especially in science, from Galileo to Stephen Hawking. But I always knew that it was possible to accomplish great things whether or not someone was a particularly good person, so elevating individual people to hero status never seemed like a good idea.

What are some of your lifetime goals?

If I’m being honest, my only strict “goal” is to keep having a good time, learning interesting things about the universe, and spread the excitement of science widely. It’s about the journey, not any particular destination. But certainly I’d love to write a scientific paper that would represent a significant improvement in our understanding of the universe, for example by helping to reconcile quantum mechanics and gravity, or understanding the origin of life. Make no small plans!

– Thanks for participating Sean Carroll! To find out more about Sean Carroll, visit his website Preposterous Universe and look for his books on amazon: The Big Picture / Particle at the End of the Universe

Read the next interview with physicist Clifford V. Johnson

Interview with a Physics Mentor: Nugatory

How to Succeed at Oral Presentations As a Physics Major

Mathematical Preparations For a Physics Major