The LHC experiments are in full swing collecting data this year (more information in the forum), and a while ago the collaboration of the CMS experiment released 300 TB of old (2011) data that everyone can analyze (forum thread). But how do these analyses look like? There are two main analysis types:

In general, searches are easier to do and to understand, this article will focus on these.

Nearly all models of new particles predict them to be short-living – they decay before they reach the detectors, all we can see are their decay products (sometimes not even those, more later). This is also true for the known particles studied at the LHC – particles long-living enough to cross the detector cannot be studied properly and get analyzed at different experiments with higher precision. This leads to an unintuitive result: We only detect particles we are not interested in. Everything else has to be reconstructed from the decay products. This also means searching for completely new particles, and searching for an unobserved decay of a known particle have much in common. One difference: For new decays the mass is known, while the mass of undiscovered particles is unknown. 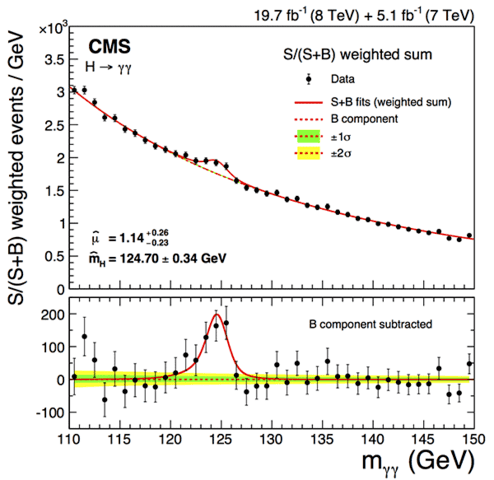 Consider the Higgs boson, for example. It can decay to two photons, their energies and flight directions are then measured by the detectors. Assuming that they came from the decay of a single particle, it is possible to calculate the mass of this particle (the invariant mass of the system). Within the detector resolution of about 1%, an actual Higgs decay will always give the Higgs mass of about 125 GeV. Collisions can also produce two photons without any Higgs involved (“background”). These have a broad spectrum in the invariant mass, so the Higgs analyses are looking for a narrow peak over a broad background. The graph on the right (upper part) shows the result of the CMS collaboration with data from 2011 and 2012. As you can see, the peak is clearly there at a mass of 125 GeV, but it is small compared to the background. In more technical terms, the signal to background ratio is much smaller than 1. Even if a photon pair looks exactly like a Higgs boson decay, it is probably from background. There is no event where you could point to and say “see, this is a Higgs decay to photons!” It might be from a Higgs, but it is probably not. Only a statistical analysis allows to confirm the existence of a particle there. After subtracting the expected number of background events, you get the lower plot, where the peak is much easier to see.

The Higgs boson has a probability of about 0.2% to decay to two photons, while its probability to decay to a bottom/antibottom quark pair (##b \bar{b}##) is about 58%, a factor of 250 more. Why do we even look for photons? The signal for ##b \bar{b}## is larger, but the background is larger as well. Quark/antiquark pairs can be produced by the strong interaction. In addition, these quarks form sets of hadrons, called jets. Measuring the energy of jets is challenging, and the uncertainties are much larger than the uncertainties of photon energy measurements. This makes the mass peak broader and therefore harder to detect, the signal to background ratio is much smaller than for the decay to photons. There could be other particles decaying to ##b \bar{b}##, however, so this spectrum is still studied.

Supersymmetry – where did my energy go?

Many of the current searches are looking for supersymmetry: the prediction that every particle has a partner that we did not find yet. Supersymmetry could solve some theoretical problems with the current model, and it would also give a plausible candidate for dark matter particles, connecting particle physics to astrophysics and cosmology. It is predicted that the lightest supersymmetric particle (LSP) is stable, or has a very long lifetime (at least tens of billions of years). If supersymmetry exists, and if the LHC can produce supersymmetric particles, most of them should quickly decay to lighter particles, ultimately producing the LSP plus some other particles. We know dark matter does not interact notably with normal matter – the LSP would escape the detector, in the same way neutrinos do. It would still leave some detectable signature: overall momentum is conserved. LHC experiments cannot accurately measure particles that travel very close to the beams (the detectors need holes for the beams…), but ATLAS and CMS can measure all particles that go in all other directions: two of the three momentum components can be measured completely. If all particles are detected, the total sum of them is zero. Deviations are called “missing transverse energy”. As an example, if some high-energetic particle goes upwards, but nothing visible goes downwards, the measured sum is not zero, and some invisible particle escaped in downwards direction. This is a powerful tool: if a collision has a large missing transverse energy, then either a neutrino or a new particle got produced. And we know the processes that produce neutrinos quite well so we can estimate how frequent they are, and compare that to the observed frequency. If we see more than expected, it could be a new particle – or a systematic error, or just a statistical fluctuation. Systematic uncertainties are a large topic (and many analyses spend most of their time on those), but typically not the limiting factor in searches.

No analysis works without a statistical analysis of the results. The following examples introduce some of the main aspects for searches:

In December 2015, ATLAS and CMS, the two biggest experiments at the LHC, presented the results of about 20 searches each based on data collected in 2015 – at a much higher energy than the collisions before. Most of them were without surprises, but the search for particles that decay to two photons had interesting results. Both experiments saw more events than expected in one mass range – nearly the same range in both experiments. The local significances were given as 3.9 sigma (ATLAS) and 2.6 sigma (CMS). The global significances were just 2.0 (ATLAS) and less than 1.2 (CMS) – but the excess was observed at the same place, so we cannot “look elsewhere” for both experiments separately. Both experiments updated their analyses later (ATLAS, CMS), the local significance for CMS went up to 3.4 sigma. See also this forum discussion.

While not significant enough to claim a discovery of a new particle, this excess lead to huge excitement in the theorist community – more than 500 papers have been written, trying to explain it in terms of new physics. If it is a new particle, it would revolutionize particle physics: the first unexpected particle discovery since the Standard Model has been developed (1967). In addition, most models predict the existence of additional particles that could be searched for. Due to the excellent performance of the LHC, the collected datasets from 2016 are much larger than those from last year already. First results are expected for the upcoming ICHEP conference, presentations of the analyses are scheduled for Friday August 5th. A really weird statistical fluctuation, a new particle, or some weird experimental effect?

We will know more soon.

Exploring the Energies in the Large Hadron Collider

Struggles with the Continuum – Relativity and Quantum

Learn About Tetrad Fields and Spacetime
Scroll to top