Back in my school days, it was never clear to me what these diagrams actually showed. Intuitively, it seemed to me that the magnetic field wasn’t just a bunch of discrete lines, suggesting that this is just a picture. Yet if you scatter iron filings around a magnet you do get lines, suggesting that field lines are very real. So what is going on?

What are field lines?

Fields that only have a single value at a point (like the air temperature) are called scalar fields. They are relatively easy to represent using contour lines, or color maps, or out-and-out 3d models in some cases. But a magnetic field is a vector field, meaning that it has both a strength and a direction at every point. This is harder to draw, but there are several approaches. Possibly the most honest way is to show the direction and strength of the field as an arrow at each point (or on a regular grid of points, at least). For example, a circular loop of wire with a current running through it generates a magnetic field. Taking a plane passing through the diameter of the current loop, the magnetic field looks like this: 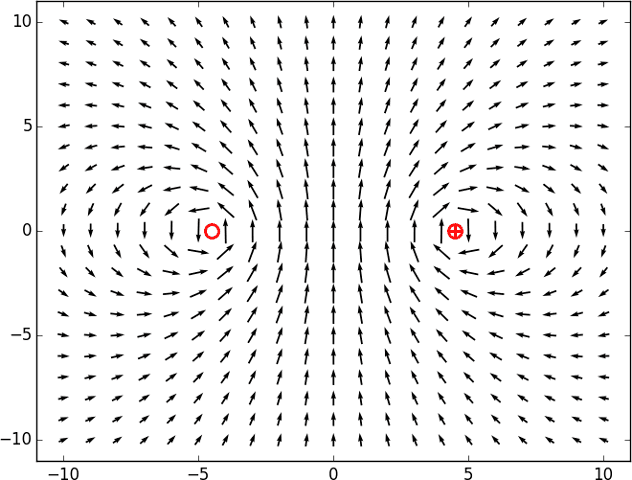 The red circles show where the current loop passes into and out of the plane of the screen. Each arrow shows the strength (by its length) and direction (by, well, its direction) of the magnetic field at the point at the middle of the arrow. Note that I was careful to pick a slice where all of the arrows would lie in that slice, so these 2d arrows are enough. If I had picked an off-center slice I’d have needed to represent the arrows coming out of the screen somehow – not impossible to draw, but harder.

But a problem with such diagrams is that the length of the arrows is constrained by the distance to their neighbor, so if you have a field strength that varies strongly, you can find that the arrows shrink so small you can’t see the direction. In fact, the picture above shows the log of the field strength rather than the field strength itself, for exactly this reason. You can, of course, just make all the arrows the same length – but then you lose information about the field strength. Or you can let arrows overlap – but this can easily end up in a hard-to-understand mess. 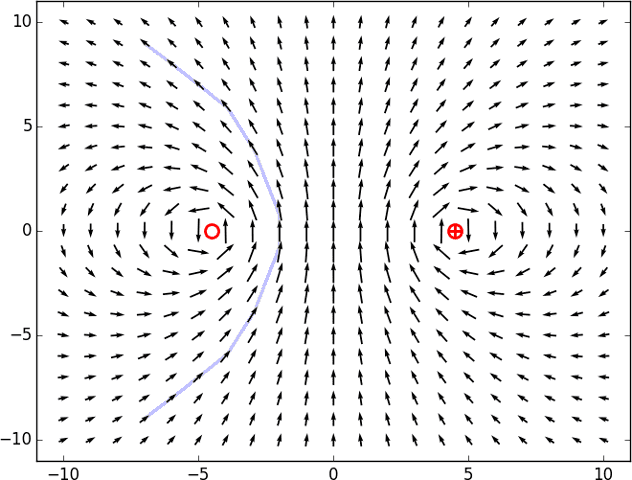 You can see that this is a rather inaccurate approach because the arrows don’t necessarily quite point to any nearby one. It gets better if you make the grid finer, so there are more arrows and you’re more likely to find a nearby arrow that is being pointed at. And if you go to an infinitely fine grid (i.e., an arrow at every point, just like the magnetic field is defined at every point) then any arrow always points directly to an infinitesimally nearby one. Infinite numbers of arrows are hard to draw, but for this we invented calculus. Connecting infinite numbers of infinitely small arrows gives us an integral curve of the field – also known as a field line. Getting a numerical integrator to do this for the current loop gives this familiar-looking diagram: 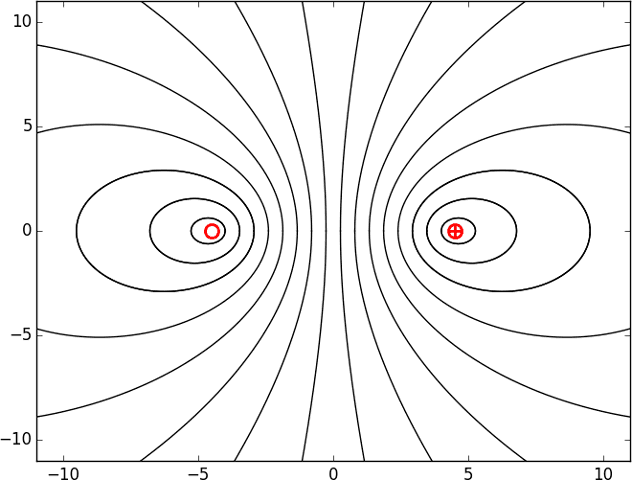 So that’s what field lines are. The magnetic field (or any vector field) has a strength and a direction at every point in space. If you pick a starting point and just “go with the flow” of the field, the path you follow is a field line. Like contour lines, they only show particular parts of the field. But unlike contour lines, they don’t mark 1equal magnetic field strength. We could draw such contours by joining up points that have arrows of equal length, and they would, in general, be a different shape to the field lines.

So, back to my original confusion. Is the magnetic field really a bunch of lines, like the ones you get by scattering iron filings?

No, a magnetic field is not a discrete bunch of lines. The most true-to-life representation of the magnetic field is, in my opinion, the arrow diagram. The field isn’t really arrows with a spatial extent, nor is it discrete like that. But the diagram gives you a sense that there is a strength and a direction at every point, and shows you the overall pattern of the field.

But sometimes the arrows aren’t the most helpful way of representing the field, and the field line depiction becomes useful. Field lines are real in the same sense that the arrows are, or the contour lines on a map. They aren’t just a picture – they genuinely represent something mathematical about the field. But the field lines I choose to draw aren’t unique. The picture above results from choosing a few points evenly spread across a diameter of the wire loop as the “seeds” of the lines, and I chose these because of symmetry concerns – all the lines must pass through the loop, and I expect some kind of symmetry about this line because the wire itself has symmetry here. If instead, I make a poor choice of seed points then the resulting picture may have areas without field lines, or an asymmetrical distribution – like these two examples:

But what about those iron filings?

So, if I am saying that the magnetic field most definitely is not a bunch of discrete lines, why do iron filings trace them out?

This is an example of self-organizing behavior. Drop a single iron filing near a magnet and it will tend to line up with the direction of the magnetic field vector at that point. Iron “conducts” magnetic fields, slightly strengthening the field along its axis, while weakening the field beside it. So the next filing to fall nearby is pulled into line by the slightly distorted magnetic field near the first filing. Lining a lot of little filings up in the direction the field points is very similar to the procedure I used to draw field lines – this is just a “natural” way to do it.

In fact, if you look carefully at an image of iron filings in a magnetic field (e.g. at Wikipedia), you will see the lines are often broken and “skip” sideways where there weren’t enough filings for the self-organization to happen perfectly. And the distribution clearly doesn’t mirror symmetric as it should be. So, although iron filings do appear to show magnetic field lines, it’s because they change the magnetic field to cause that behavior.

Field lines are the integral curves of a vector field, the lines one creates by picking a point and repeatedly aligning oneself to the direction of the field at that point then stepping an infinitesimal distance in that direction. They are no more real than the contour lines on a map are real – they represent some aspects of reality, but they are not the whole story. Iron filings pick out magnetic field lines as a result of the way they reshape the magnetic field, in a form of self-organization, not because the field lines are really all there is to magnetic fields.

Symmetry Arguments and the Infinite Wire with a Current