Whilst no doubt most frequenters of “Physics Forums” will be familiar with Nicolaus Copernicus as the scientist who advanced the (at the time) radical thesis that the earth revolved around the sun rather than vice versa, a perhaps less well-known aspect of his work is the “nuts and bolts” geometry underlying his ground-breaking treatise: “De Revolutionibus Orbium Coelestium” (On the Revolutions of the Heavenly Spheres).  In this article (and perhaps others to follow), we analyse “Copernican geometry” in light of its stated intent:

Because the proofs which we shall use in almost the entire work deal with straight lines and arcs, with plane and spherical triangles, and because Euclid’s Elements, although they clear up much of this, do not have what is here most required, namely how to find the sides from the angles and the angles from the sides, since the angle does not measure the subtending straight line – just as the line does not measure the angle – but the arc does, there has accordingly been found a method whereby the lines subtending the arc may become known. By means of these lines or chords, it is possible to determine the arc corresponding to the angle; and conversely by means of the arc to determine the straight line or chord which subtends the angle … But we will unfold this in six theorems and a problem – following Ptolemy fairly closely.

The diameter of a circle being given (ie 200000 parts), the side of the triangle, tetragon, pentagon, hexagon and decagon, which the same circle circumscribes, are also given.

Therefore the diameter of the circle being given, the sides of the triangle, tetragon, pentagon, hexagon and decagon, which may be inscribed in the same circle, have been given – as was to be shown.

Furthermore, it is clear that when the chord subtending an arc has been given, that chord too can be found which subtends the rest of the semicircle.

Since the angle in a semicircle is right, and in right triangles, the square on the chord subtending the right angle (ie the square on the diameter) is equal to the sum of the squares on the sides comprehending the right angle; therefore – since the side of the decagon which comprehends ##36^{\circ}## of the circumference has been shown to have 61803 parts whereof the diameter has 200000 parts – the chord which subtends the remaining ##144^{\circ}## of the semicircle has 190211 parts.

Constructions to inscribe an equilateral triangle, ‘tetragon’ (square) and regular hexagon in a circle along with calculation of their sides (in terms of circle diameter) should be obvious enough. These lead to the well-known trigonometric ratios of  “special angles” which every introductory course in trigonometry will include. Nevertheless, we will include simple construction diagrams for these figures for the sake of completeness. We will also demonstrate how the calculated sides of regular ‘n-gons’ translate into the sine values of the associated angles or (correspondingly) into the values of the “half chords” presented in the Copernican table – the endpoint of the “six theorems and a problem” mentioned in the introduction above. 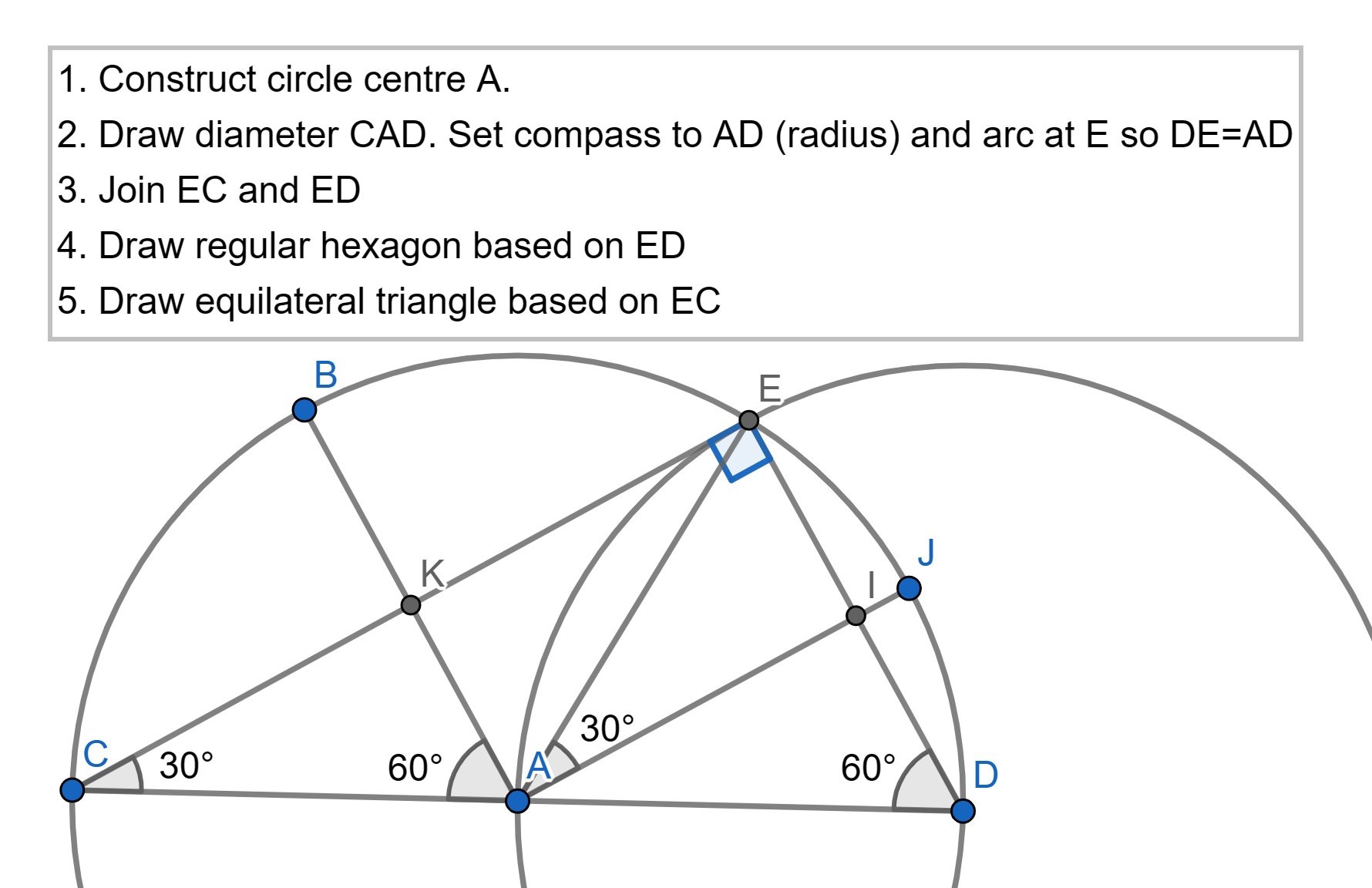 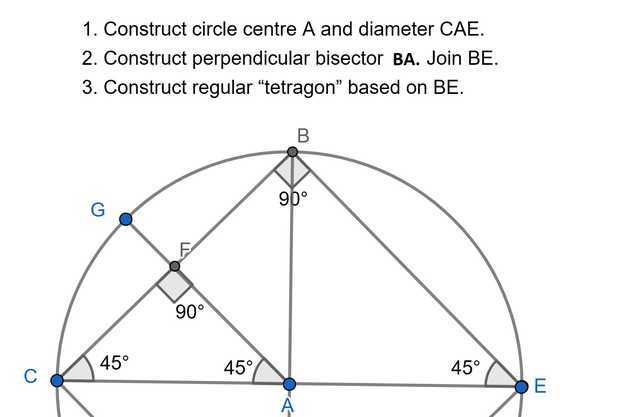 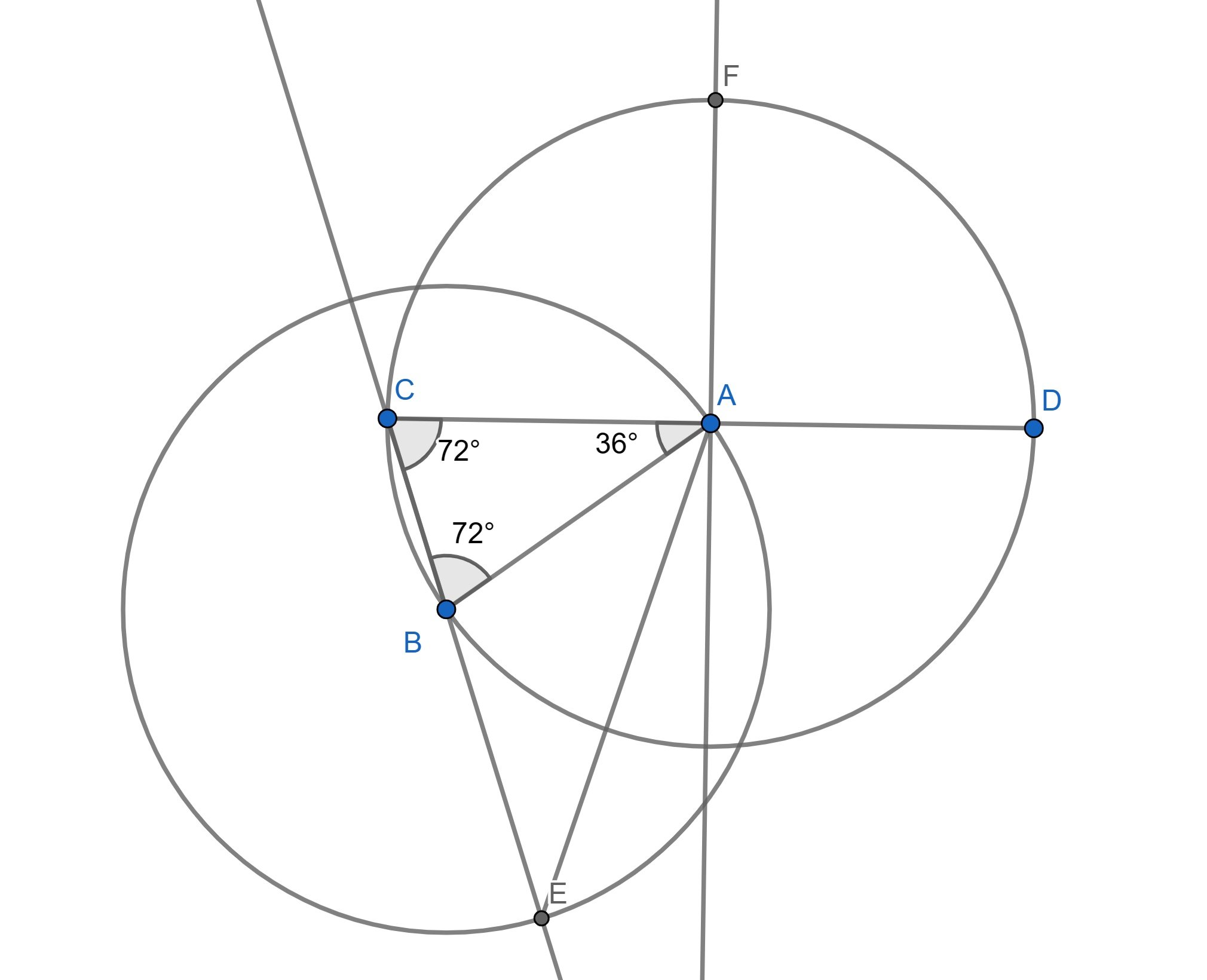 If CB is the side of a regular decagon, the angles at A, B and C will be as shown. Line CB is extended and a circle of radius AB centre B is drawn to intersect the line through CB at E. EA is joined. Since EBA is an isosceles triangle, angle E and the second angle at A will both be ##36^{\circ}.## It follows that triangles ECA and ABC are similar from which we may write the ratio equation: $$\frac{EC}{AB}=\frac{AC}{BC}\implies EC.BC=AB.AC={EB}^2 \implies \frac{EC}{EB}=\frac{EB}{BC}$$ showing that CE has been divided in mean and extreme at B with EB (radius or side of the hexagon) being the greater part and BC (side of decagon) the lesser.

The final piece of the ‘jigsaw puzzle’ to put in place (before we proceed with construction of a regular pentagon and decagon (or at least one side thereof) and subsequent calculation of side lengths) is the statement that the square on the side of an inscribed regular pentagon is the sum of the squares on the sides of the regular hexagon and decagon. Clearly, this is a Pythagorean relationship but invoking Pythagoras in an attempted proof only leads us back to the original statement. Copernicus directs us instead to Euclid XIII, 10 which reads as follows:

We may now proceed with the construction and calculation of the sides of the inscribed regular decagon and pentagon. 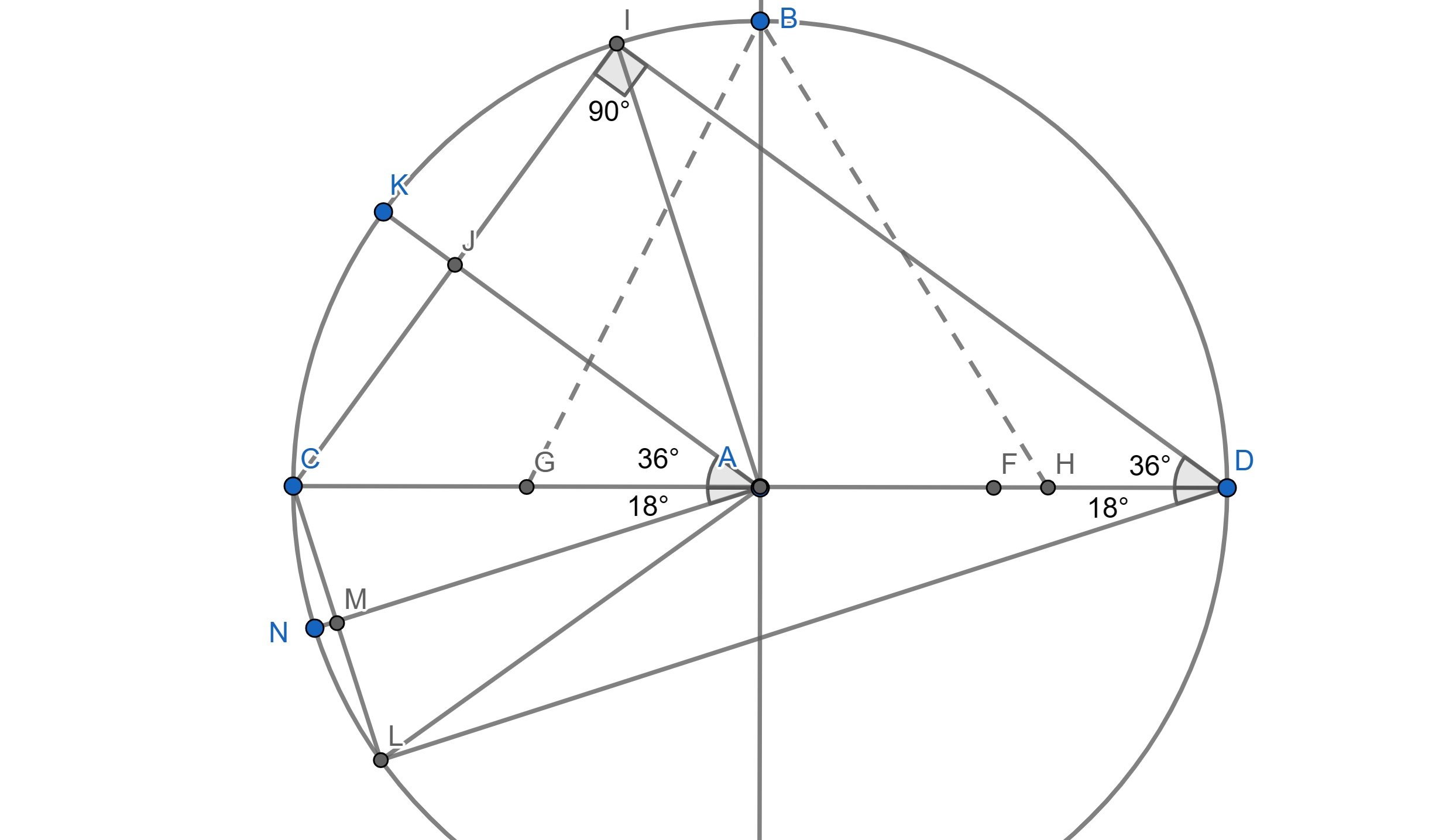 The following table summarises the quantities determined above.

Therefore the diameter of the circle being given, the sides of the triangle, tetragon, pentagon, hexagon and decagon, which may be inscribed in the same circle, have been given – as was to be shown.

I would like to thank PF user Kuruman who kindly agreed to look over the article before I posted it for review here. It’s always encouraging to have a further  “thumbs up” from one or other of PFs many experts so many thanks to PF user jim mcnamara who took time out to read the article and react in such a manner.

How to Self Study Geometry for Students

Physical Applications of the “Tan Rule”

How to Setup a Raspberry Pi Cluster
Scroll to top