In this Insight, I’ll discuss a recent experiment ([1]  [2] [3]) by some Australian physicists that has brought a thought experiment into the real world [4], and in doing so has lent some ammunition to a most unlikely idea:

Retrocausality: A reversal of the concept of causality, allowing effects to occur before the events that cause them.

The Arrow of Time

“The arrow of time” simply refers to the way that time passes. Most people take the arrow of time for granted because we observe it as having a direction: forward. That’s the way we perceive it, the way we interact with it. Water does not spontaneously jump back into a glass, buildings do not materialize from the rubble, etc… These things all serve to give time a definite sense of direction. When you do things, they have consequences that come afterward. For scientists, the idea that all effects have a preceding cause is referred to as causality.

Causality is a pretty deeply rooted idea. There is an awful lot of evidence that the arrow of time has a single direction. It’s one of the assumptions made in Special Relativity [5], because without causality there is the ability to move faster than light, and an effect can be observed before its cause (see Figure 1). It’s also required by the Second Law of Thermodynamics [6], whereby the perpetual increase of entropy in closed systems requires a single direction for a time. There is even evidence [7] that the arrow of time arises naturally out of a universe that has gravity.

My personal feeling is that the arrow of time is fundamental and shouldn’t be thrown around lightly. Without an absolute arrow of time, we end up with a universe where time travel is possible, but events are mostly deterministic, resulting in free will being only an illusion. Depending on your views of the world, a lack of a free will can be disturbing.

The experimental setup is quite clever, as described in [3]:

“…They fired the atoms at two grate-like forms created by lasers, although the effect was similar to a solid grate.

What they found was that, when there were two grates in place, the atom passed through it on many paths in a wave form, but, when the second grate was removed, it behaved like a particle and took only one path through.

So, what form it would take after passing through the first grate depended on whether the second grate was put in place afterward. Therefore, whether it continued as a particle or changed into a wave wasn’t decided until a future event had already taken place.

Time went backwards. Cause and effect appear to be reversed. The future caused the past. The arrow of time seemed to work in reverse.”

This amazing result caused one of the scientists to say, “It proves that measurement is everything. At the quantum level, reality does not exist if you are not looking at it.”  Though that seems a bit sensational to me, it really is what’s on the table!

The Strangeness of Wave-Particle Duality 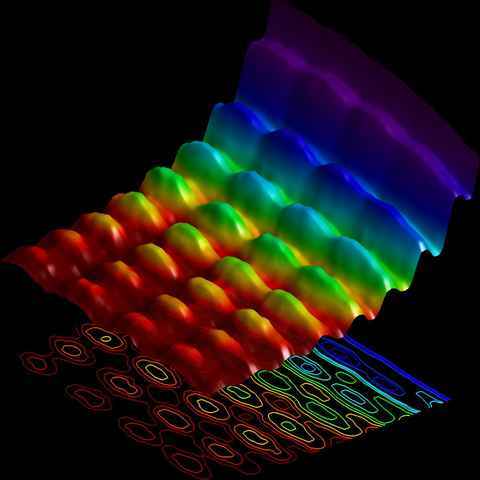 A key sentence in the description of the experiment is this one:

Therefore, whether it continued as a particle or changed into a wave wasn’t decided until a future event had already taken place.

This is key because it says that retrocausality is only implied by the experiment if this choice is actually occurring! In other words, if you operate under the assumption that the atom “decides” to behave as a particle, or as a wave, depending on the physical situation, then the information involved in making that choice would seem to violate causality.

But why do elementary particles sometimes act like particles, and other times act as waves [8]? Are they really just both all the time? For that matter, what does it mean to exist as both? Does the particle exist at all before it is measured? These are all questions that we don’t yet have solid answers to!

It’s timely that this experiment was reported about the same time that the first-ever picture of light as both a wave and a particle was released. This helps bring several conflicts in physics into the public eye, which is a great opportunity for discussion.

Here are a few interpretations of this experiment:

What do you think? Do you have a different interpretation? Is the arrow of time fundamental, or can it be tampered with?

Josh received a BA in Physics from Clark University in 2009, and an MS in Physics from SUNY Albany in 2012. He currently works as a technical writer for MathWorks, where he writes documentation for MATLAB.

Why You Can’t Quantum Tunnel Through a Wall

The 7 Basic Rules of Quantum Mechanics

Struggles With The Continuum: Quantum Mechanics of Charged Particles