I was perusing the Nature Nanotechnology website today when I came across an interesting article by Funke and Dietz, called “Placing molecules with Bohr radius resolution using DNA origami.” The authors created a hinge out of DNA which they selectively open or close by varying the length of one of the DNA molecules, which allows them to adjust the positions of molecules attached to the hinge by as little as 0.04 nanometers, much less than the typical spacing between atoms in a solid.

One of the initial visions of nanotechnology, in Richard Feynman’s essay  “There’s Plenty of Room at the Bottom,” was that tiny machines could be built atom by atom, arranged according to our design. This, however, is not the way the field of nanotechnology progressed: most of its successes revolved around making smaller and smaller electronic components using “top-down” procedures such as electron-beam lithography. This was very useful, but not really akin to the idea of “bottom-up” nanotechnology that was dreamed about. One of the first successful methods of bottom-up nanotechnology was the advent of DNA origami in the mid-2000s.  In Rothemund’s 2006 paper, he combined a long strand of viral DNA with many short “staple” strands that he designed himself, which bound to the longer strand in such a way as to make it self assemble into, among other things, 100-nanometer smiley faces. The ability to design these structures has progressed since then, with 3D structures and boxes that can open and close. Originally this seemed like a solution without a problem,  but it has found applications in drug delivery (e.g. a box that only opens and releases its content if it is unlocked by the right gene) and scaffolding for arranging other things onto DNA lattices for top-down lithography. Here is a video demonstrating how these things self-assemble.

Some examples of DNA origami: a cube, a smiley face, a box with a functional lid, and a map. Source.

Using DNA has the advantage over other biological polymers like proteins and RNA that we can completely dictate and understand the structure through the choice of the strand sequence. This means that the position of every base can be predicted before the structure is assembled, and within that, the position of each atom can be dictated. Atoms can also be moved around one-at-a-time with scanning probe microscopes, but this is extremely slow, limited to two dimensions, and not mass-producible in the way that chemical self-assembly is. Funke and Dietz were interested in using DNA origami to specifically control the distance between two molecules. The standard approach to that type of thing involved creating a “breadboard” in a lattice of DNA origami and positioning things within the lattice. They wanted to do better.

They created what essentially amounts to an adjustable DNA hinge: two comparatively rigid backbones made of DNA origami structures, with a triangle of DNA double-helices controlling the interior angle of the two structures. By dictating the number of base pairs in the supporting leg of the triangle, they could control the opening angle. By adjusting it one base-pair at a time, from 10 to 50 base-pairs, roughly 3 to 17 nanometers (a good rule of thumb is that double-stranded DNA has three base-pairs per nanometer), they adjusted in the opening angle of the hinge in 41 discrete steps. Looking at the hinges with a transmission electron microscope, it is clear that the angle can be precisely controlled.

Images from the paper showing the design of the hinge (the cylinders are made of DNA as well). Electron microscopy images show it opening at different angles based on the number of base pairs in the opening strand. The scale bar is 20 nanometers.

To see how well they could position molecules using this hinge, they attached two fluorescent molecules to the interior arms of the hinge triangle, on equivalent positions (the colored dots in the above picture). These molecules undergo Förster resonant energy transfer (FRET), a phenomenon where optically excited molecules transfer their excess energy to unexcited molecules through dipole forces. Through this mechanism, the originally unexcited molecule emits light that is a lower frequency than the excitation of the first molecule, so by detecting this lower frequency emission it can be ascertained that one molecule transferred its energy to another. These dipole interactions are extremely short-range and decay with the sixth power of distance, it is used in biophysics and related fields to see whether molecules come into physical contact with one another (to the extent that that is meaningful on the atomic scale), and exactly how close they get. 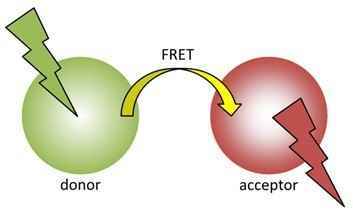 Diagram of how FRET works. The important thing is that it only works if the molecules are really close. Source.

So, Funke and Dietz measured the FRET intensity coming out of these marker molecules from hinges with different opening angles. They had two independent estimates of the distance: the FRET intensity, and their knowledge of the hinge’s structure. By comparing them, they found out, unsurprisingly, that the FRET intensity is correlated with the structural position of the dye molecules. They could accurately measure the difference in FRET intensity of molecules separated from 1.5 to 9 nanometers, in 123 (41 x 3) steps of as little as 0.4 angstroms each. That is an extremely precise measurement, one of the most precise I know of in condensed matter physics. As they state in the paper, this is comparable to the Bohr radius of an atom, the average distance from the nucleus to the first electron. Atoms in a solid are typically separated by a few angstroms, and they can position molecules on these DNA hinges with much greater precision than that: this is atomic positioning with sub-atomic resolution.

In the “how this will change the world if we get more money” section that concludes every paper, the authors talk about how this will lead to new applications of DNA origami to templating chemical reactions at precise locations, to probe interatomic forces at precisely defined distances, and to map out the structure of proteins by binding them to specific sites on these hinges, essentially creating the worlds finest ruler. All of these are pretty cool ideas.

I chose to do my graduate research on using top-down nanotechnology to study DNA in part because I thought DNA origami, which was only a few years old at the time, was really cool. One aspect of my master’s project was about controlling what structure DNA will fold into at equilibrium, although my Ph.D. was more quantitative. Checking up on the field every few years, it’s impressive to see the progress that this field is making, and every time I read a DNA origami paper I learn something interesting. I look forward to seeing where it goes in the next few years.

Learn the Amazing New Research on Untying Knots in Polymers

Blockworld and Its Foundational Implications: Time Dilation and Length Cont...
Scroll to top