In learning Thermodynamics, one of the difficult concepts that many students struggle with is the difference between reversible and irreversible work in the expansion/compression of a gas.   They wonder,

1.  Why is it that we need to use two different equations to calculate the work done by the system on the surroundings, one for a reversible process (##dW = PdV##, where P is the gas thermodynamic pressure calculated from the ideal gas law ##P =nRT/V##), and the other for an irreversible process (##dW = P_{ext}dV##, where ##P_{ext}## is the external force per unit area exerted by the surroundings (the piston face) on the gas?

2.  Since, by Newton’s third law, the external force per unit area exerted by the surroundings on the gas ##P_{ext}## is equal to the gas thermodynamic pressure at the interface P, shouldn’t the equation ##dW = PdV## for reversible processes also correctly give the work for the irreversible process?

In the present development, we will address all three of these questions, but our initial focus will be on question 3.  Once we explore the answer to this question, the answers to questions 1 & 2 should become more apparent. 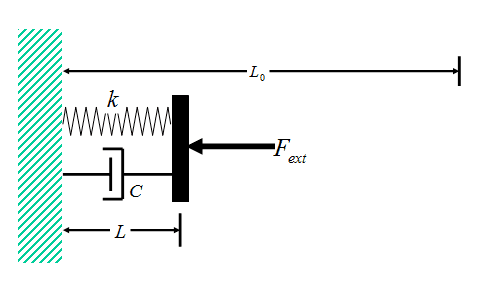 We will also note that the total external force required to compress the combined system ##F_{ext}## is not just that required to compress the spring ##F=kΔL##, but also includes a contribution from the viscous damper, and this contribution increases with increasing rate of compression.  So we would not expect the applied external force to match that of the spring alone ##F=kΔL## unless the compression is carried out very slowly.  This is analogous to the case of irreversible gas compression in which the external force per unit area ##P_{ext}## required to compress the gas is higher than the pressure calculated from the ideal gas law alone ##P =nRT/V##.  The force also includes a contribution from the viscous stresses in the gas.

After we have completed our detailed quantitative assessment of the spring-damper system, we will turn attention to the compression/expansion behavior of an ideal gas. While the spring-damper system is sufficiently simple to completely describe its time-dependent behavior for arbitrary transient loading with relative ease, this is not so in the case of an ideal gas.  For an ideal gas, the detailed treatment is much more complicated and involves the solution to the complicated gas dynamics equations, including the Navier-Stokes equations, the local thermal energy balance equation (including viscous dissipation), the ideal gas law, and the local continuity/mass-conservation equation.  Fortunately, in the special case of a constant external force per unit area ##P_{ext}## applied to the gas, these difficulties can be circumvented, and the total irreversible and reversible work can be determined relatively easily.  We will compare these results for an ideal gas with the corresponding findings for a spring-damper system to illustrate quantitatively how closely they resemble one another. 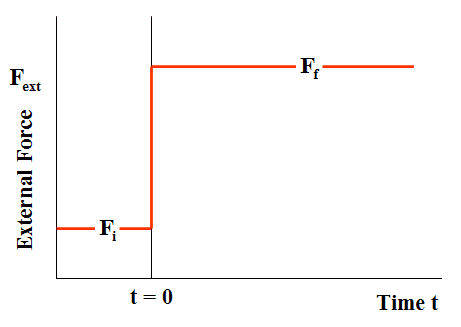 The unextended length of the spring is ##L_0## and, to simulate the behavior of a gas (which can exhibit only compressive force), the spring is assumed to be loaded in compression throughout the entire time-dependent deformation of the system.  Thus, the initial equilibrium length of the system ##L_i##,  the final equilibrium length ##L_f##, and the length L at time t during the deformation are all less than ##L_0##.

The compressive force exerted by the spring (a) initially, (b) at time t, and (c) in the final equilibrium state of the system are related to the corresponding lengths of the spring by:

Unlike the spring element, the compressive force exerted by the viscous damper ##f_V## is related not to the length of the damper L, but rather to the rate of change of the viscous damper length with respect to time:$$f_V=-C\frac{dL}{dt}\tag{2}$$ where C is the so-called “viscous damper constant.”

If we perform a force balance on the (massless) plate in Fig. 1, we obtain $$F+f_V=F_{ext}(t)\tag{3}$$ Note from this equation that the (reversible) spring compressive force is not the only load acting on the plate.  There is also the (dissipative) viscous damper force applied to the plate.   These two forces combine to determine the overall (constant) force ##F_{ext}## of the spring-damper system. 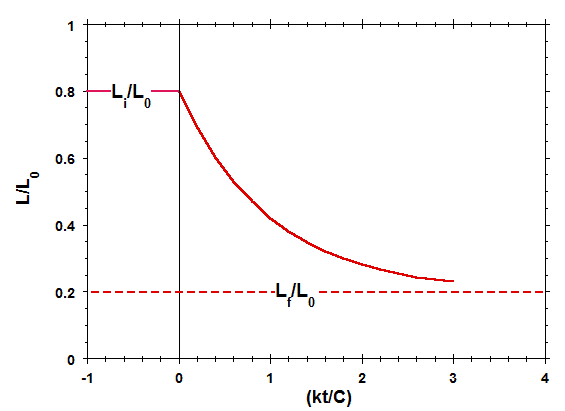 Comparison of Figs. 2 and 3 indicates that, for the situation currently being considered, while the applied external force ##F_{ext}##changes discontinuously at time t = 0, the length of the spring-damper element L varies continuously (and more gradually) from its initial length to its final length, on a time scale on the order of C/k.  This more gradual variation is the direct result of the presence of the viscous damper element in the system.  A similar effect occurs when a gas is forced to expand or compress in a cylinder, as a direct result of the viscous behavior of the gas (Yes, even in the low-pressure limit of ideal gas behavior, gases exhibit non-zero viscosity). 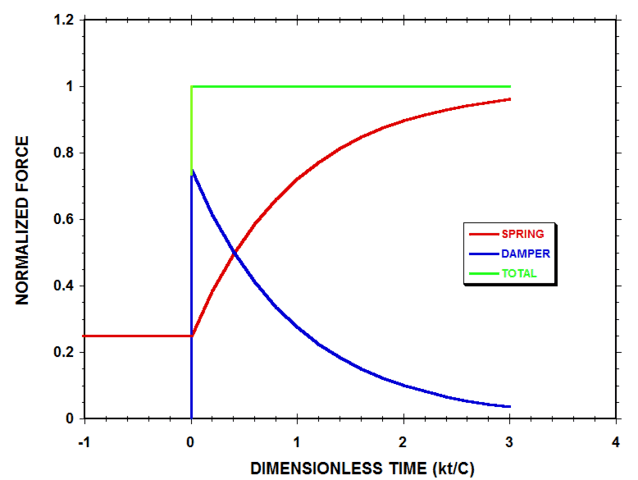 According to Fig. 4, the elastic spring continues to support only 25% of the applied load at the instant immediately after the external compressive force ##F_{ext}## is suddenly increased, while the damper, by deforming rapidly and viscously, supports the remaining 75% of the load.  As time progresses, the rate of change of damper length with time decreases in magnitude, and the damper supports less of the load, while more of the load is borne by the spring.  At the final equilibrium state of the system, the spring supports all the load, and the force of the damper has decayed to zero.

Let us now finally consider the reversible and irreversible work done by the spring-damper system.  This can be obtained by multiplying each of Eqns. 6 by the rate of increase of length dL/dt derived from Eqn. 5, and then integrating with respect to time from time t = 0 to t →∞.  We thereby obtain:

where ##W{_R}## denotes the reversible work, ##w_{v}## denotes the viscous work, and ##W_{Irr}## denotes the irreversible work.  Note that the damper constant C no longer appears in these equations, and thus these results for the work done between the initial and final equilibrium states of the system apply irrespective of the (non-zero) value of the damper constant.  The reversible work ##W_R##  represents that done by the spring alone and is also equal to the change in stored elastic energy of the spring.  The irreversible work ##W_{Irr}## represents the combined work done by the spring and damper on their surroundings (the plate) and is determined by the applied external force integrated over its displacement.  The viscous work ##w_V## represents the work done by the damper on the surroundings (the plate), and, by virtue of the squared term in Eqn. 8b, is always negative, irrespective of whether the system is being expanded or compressed.  Thus, in all situations, the viscous damper robs usable mechanical energy from the surroundings and dissipates it as (less usable) thermal energy. 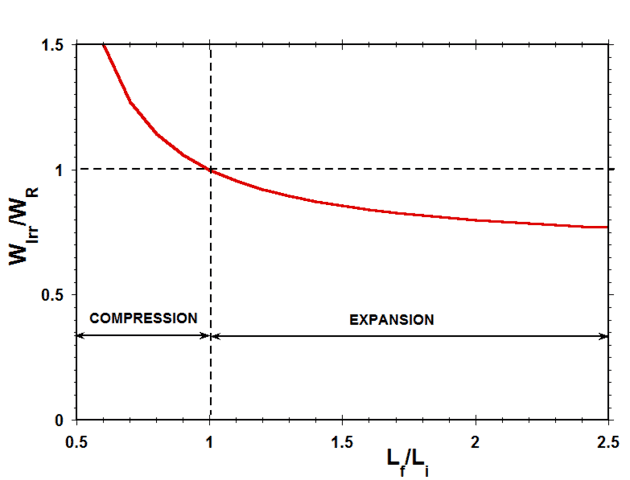 Consider the irreversible expansion or compression of an ideal gas contained in a cylinder featuring a massless frictionless piston (Fig. 6 – compare to Fig. 1).  The system is immersed in a constant temperature bath (not shown) at temperature T so that the temperature of the gas in the initial and final equilibrium states of the system is T. 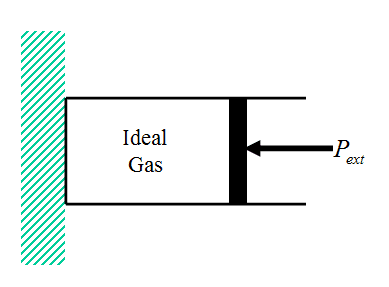 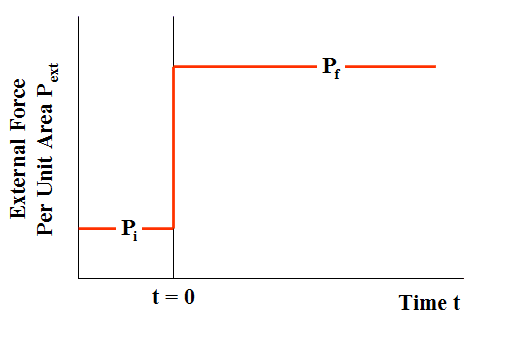 Even with all these complexities, the net effect of the change that occurs between the initial and final equilibrium states of the gas system is mechanistically exactly the same as in the case of the spring-damper system:  The irreversible work ##W_{Irr}## is equal to the reversible work ##W_{R}## plus the work associated with viscous stresses ##w_{V}## (Eqn. 7).

In the case of the spring-damper system, we calculated the viscous work explicitly by solving for the transient viscous damper force and integrating over the transient displacement (Eqn. 8b).  However, we could equally well have obtained the same result simply by subtracting the reversible work from the irreversible work (the equation for each of which is considerably easier to write down).   In the case of the ideal gas, we now follow this latter approach.  Thus, assuming the irreversible expansion is carried out at constant applied external force per unit area ##P_f=P_{ext}##, the reversible-, irreversible-, and viscous work for isothermal expansion/compression of an ideal gas are given by:

Fig. 9 shows a plot of the ratio of the irreversible work to the reversible work ##W_{Irr}/W_{R}## for the case of an ideal gas as a function of the expansion/compression volume ratio ##W_f/W_i##. 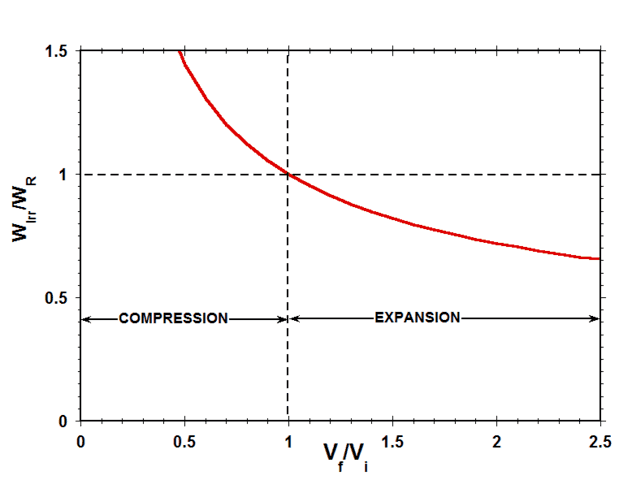 Finally, note the striking resemblance between Fig. 9 for the case of an ideal gas and Fig. 5 for the corresponding case of a spring-damper system.  This comparison provides compelling evidence that the mechanistic cause of the difference between the reversible- and irreversible work in the irreversible expansion/compression of an ideal gas is the rate-dependent viscous work associated with deforming the gas.

Addressing Question 1 and 2 of the Introduction

In a gas cylinder-piston system, the work is done on the surroundings (i.e., on the inner piston face) is always equal to the time-dependent external force per unit area ##P_{ext}## applied at the face, integrated over the volume change.  In the special case of a very slow reversible expansion/compression, ##P_{ext}## is also equal to the (uniform) gas thermodynamic pressure within the cylinder, as determined by the ideal gas law (or other real-gas equation of state).  However, for a rapid irreversible expansion/compression, the thermodynamic pressure within the cylinder is not spatially uniform, and, moreover, the external force per unit area ##P_{ext}## is not determined solely by the thermodynamic pressure.  There is also an additive contribution from the viscous stresses present within the gas at the piston interface. Thus, even if we somehow knew the gas thermodynamic pressure at the piston face, this would still not be sufficient to determine ##P_{ext}##.  In an irreversible expansion or compression, the only practical way to obtain a desired ##P_{ext}(t)## is to control it manually from the outside.

A spring-damper system and a gas have a certain key physical characteristic in common:  when deformed, they both exhibit viscous behavior which is capable of dissipating mechanical energy and converting it into thermal energy (heat and/or internal energy).  The more rapid the deformation, the greater the amount of viscous dissipation.   In the present development, we have analyzed the deformation both of a spring-damper system and of gas under expansion/compression loading, and have verified that it is this viscous behavior that is responsible for the difference between the irreversible work and the reversible work done by the system.

Understanding Entropy and the 2nd Law of Thermodynamics

What Thermodynamics and Entropy Means

How to Build a Definition for Heat
26 replies