Last time we saw that nobody yet knows if Newtonian gravity, applied to point particles, truly succeeds in predicting the future. To be precise: for four or more particles, nobody has proved that almost all initial conditions give a well-defined solution for all times!

The problem is related to the continuum nature of space: as particles get arbitrarily close to each other, an infinite amount of potential energy can be converted to kinetic energy in a finite amount of time.

I left off by asking if this problem is solved by more sophisticated theories. For example, does the ‘speed limit’ imposed by special relativity help the situation? Or might quantum mechanics help, since it describes particles as ‘probability clouds’, and puts limits on how accurately we can simultaneously know both their position and momentum?

We begin with quantum mechanics, which indeed does help.

The quantum mechanics of charged particles

Few people spend much time thinking about ‘quantum celestial mechanics’—that is, quantum particles obeying Schrödinger’s equation, that attract each other gravitationally, obeying an inverse-square force law. But Newtonian gravity is a lot like the electrostatic force between charged particles. The main difference is a minus sign, which makes like masses attract, while like charges repel. In chemistry, people spend a lot of time thinking about charged particles obeying Schrödinger’s equation, attracting or repelling each other electrostatically. This approximation neglects magnetic fields, spin, and indeed anything related to the finiteness of the speed of light, but it’s good enough to explain quite a bit about atoms and molecules.

In this approximation, a collection of charged particles is described by a wavefunction ##\psi##, which is a complex-valued function of all the particles’ positions and also of time. The basic idea is that ##\psi## obeys Schrödinger’s equation
$$ \frac{d \psi}{dt} = – i H \psi $$
where ##H## is an operator called the Hamiltonian, and I’m working in units where ##\hbar = 1##.

Does this equation succeed in predicting ##\psi## at a later time given ##\psi## at time zero? To answer this, we must first decide what kind of function ##\psi## should be, what concept of derivative applies to such functions, and so on. These issues were worked out by von Neumann and others starting in the late 1920s. It required a lot of new mathematics. Skimming the surface, we can say this.

At any time, we want ##\psi## to lie in the Hilbert space consisting of square-integrable functions of all the particle’s positions. We can then formally solve Schrödinger’s equation as
$$ \psi(t) = \exp(-i t H) \psi(0) $$
where ##\psi(t)## is the solution at time ##t##. But for this to really work, we need ##H## to be a self-adjoint operator on the chosen Hilbert space. The correct definition of ‘self-adjoint’ is a bit subtler than what most physicists learn in the first course on quantum mechanics. In particular, an operator can be superficially self-adjoint—the actual term for this is ‘symmetric’—but not truly self-adjoint.

In 1951, based on the earlier work of Rellich, Kato proved that ##H## is indeed self-adjoint for a collection of nonrelativistic quantum particles interacting via inverse-square forces. So, this simple model of chemistry works fine. We can also conclude that ‘celestial quantum mechanics’ would dodge the nasty problems that we saw in Newtonian gravity.

The reason, simply put, is the uncertainty principle.

When we switch to quantum mechanics, the energy of any collection of particles becomes bounded below. The reason is that to make the potential energy of two particles large and negative, they must be very close. Thus, their difference in position must be very small. In particular, this difference must be accurately known! Thus, by the uncertainty principle, their difference in momentum must be very poorly known: at least one of its components must have a large standard deviation. This in turn means that the expected value of the kinetic energy must be large.

This must all be made quantitative, to prove that as particles get close, the uncertainty principle provides enough positive kinetic energy to counterbalance the negative potential energy. The Kato–Lax–Milgram–Nelson theorem, a refinement of the original Kato–Rellich theorem, is the key to understanding this issue. The Hamiltonian ##H## for a collection of particles interacting by inverse square forces can be written as
$$ H = K + V $$
where ##K## is an operator for the kinetic energy and ##V## is an operator for the potential energy. With some clever work one can prove that for any ##\epsilon > 0##, there exists ##c > 0## such that if ##\psi## is a smooth normalized wavefunction that vanishes at infinity and at points where particles collide, then
$$ | \langle \psi , V \psi \rangle | \le \epsilon \langle \psi, K\psi \rangle + c. $$
Remember that ##\langle \psi , V \psi \rangle## is the expected value of the potential energy, while ##\langle \psi, K \psi \rangle## is the expected value of the kinetic energy. Thus, this inequality is a precise way of saying how kinetic energy triumphs over potential energy.

By taking ##\epsilon = 1##, it follows that the Hamiltonian is bounded below on such
states ##\psi##:
$$ \langle \psi , H \psi \rangle \ge -c . $$
But the fact that the inequality holds even for smaller values of ##\epsilon## is the key to showing ##H## is ‘essentially self-adjoint’. This means that while ##H## is not self-adjoint when defined only on smooth wavefunctions that vanish at infinity and at points where particles collide, it has a unique self-adjoint extension to some larger domain. Thus, we can unambiguously take this extension to be the true Hamiltonian for this problem.

To understand what a great triumph this is, one needs to see what could have gone wrong! Suppose space had an extra dimension. In 3-dimensional space, Newtonian gravity obeys an inverse square force law because the area of a sphere is proportional to its radius squared. In 4-dimensional space, the force obeys an inverse cube law:
$$ F = -\frac{Gm_1 m_2}{r^3} . $$
Using a cube instead of a square here makes the force stronger at short distances, with dramatic effects. For example, even for the classical 2-body problem, the equations of motion no longer ‘almost always’ have a well-defined solution for all times. For an open set of initial conditions, the particles spiral into each other in a finite amount of time! 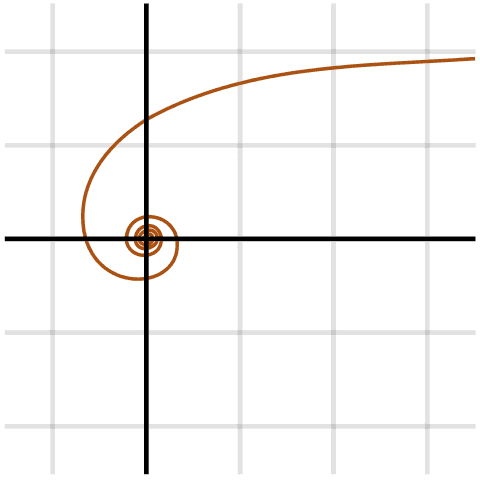 The quantum version of this theory is also problematic. The uncertainty principle is not enough to save the day. The inequalities above no longer hold: kinetic energy does not triumph over potential energy. The Hamiltonian is no longer essentially self-adjoint on the set of wavefunctions that I described.

In fact, this Hamiltonian has infinitely many self-adjoint extensions! Each one describes different physics: namely, a different choice of what happens when particles collide. Moreover, when ##G## exceeds a certain critical value, the energy is no longer bounded below.

The same problems afflict quantum particles interacting by the electrostatic force in 4d space, as long as some of the particles have opposite charges. So, chemistry would be quite problematic in a world with four dimensions of space.

With more dimensions of space, the situation becomes even worse. In fact, this is part of a general pattern in mathematical physics: our struggles with the continuum tend to become worse in higher dimensions. String theory and M-theory may provide exceptions.

For more on the inverse cube force law, see:

It turns out Newton made some fascinating discoveries about this law in his Principia; it has remarkable properties both classically and in quantum mechanics.

The hyperbolic spiral is one of 3 kinds of orbits possible in an inverse cube force; for the others see:

The picture of a hyperbolic spiral was drawn by Anarkman and Pbroks13 and placed on Wikicommons under a Creative Commons Attribution-Share Alike 3.0 Unported license.

Is Pressure A Source Of Gravity?

What Planck Length Is and It’s Common Misconceptions
39 replies