Before proceeding with a discussion of the super p-brane sigma models, whose emergence from the superpoint I discussed in the previous article, we need to speak a bit about the fundamentals of local Lagrangian field theory in general, of which these sigma-models are examples.

The geometry that underlies the physics of Hamilton and Lagrange’s classical mechanics and classical field theory has long been identified: this is symplectic geometry [Arnold 89] and variational calculus on jet bundles [Anderson 89, Olver 93]. In these theories, configuration spaces of physical systems are differentiable manifolds, possibly infinite-dimensional, and the physical dynamics is all encoded by way of certain globally defined differential forms on these spaces. But fundamental physics is of course of quantum nature, to which classical physics is but an approximation that applies at non-microscopic scales.

Of what mathematical nature are systems of quantum physics?

The need for prequantum geometry

A sensible answer to this question is given by algebraic deformation theory. One considers a deformation of classical physics to quantum physics by deforming a Poisson bracket to the commutator in a non-commutative algebra, or by deforming a classical measure to a quantum BV operator.

However, this tends to work only perturbatively, in the infinitesimal neighborhood of classical physics, expressed in terms of formal (possibly non-converging) power series in Planck’s constant ##\hbar##. 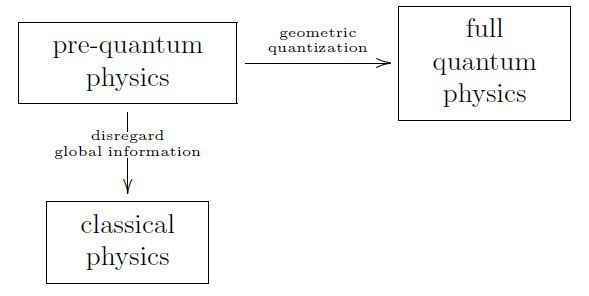 For global gauge groups, this global coherence data is also known as the cancellation of classical anomalies [Arnold 89, section 5.A].

The archetypical example of pre-quantization is Dirac charge quantization [Dirac 31 , Frankel 97, section 5.5, Freed 00]. The classical mechanics of an electron propagating in an electromagnetic field is all encoded in a differential 2-form, called the Faraday tensor ##F##, which encodes the classical Lorentz force that the electromagnetic field exerts on the electron. But this data is insufficient for passing to the quantum theory of the electron: locally, on a coordinate chart ##U##, what the quantum electron really couples to is the “vector potential”, a differential 1-form ##A_U## on ##U##, such that ##d A_U = F|_U##. But globally such a vector potential may not exist. Dirac realized that what it takes to define the quantized electron globally is, in modern language, a lift of the locally defined vector potentials to an ##(\mathbb{R}/\mathbb{Z})##-principal connection on a ##(\mathbb{R}/\mathbb{Z})##-principal bundle over spacetime. The first Chern class of this principal bundle is quantized, and this is identified with the quantization of the magnetic charge whose induced force the electron feels. This quantization effect, which needs to be present before the quantization of the dynamics of the electron itself even makes sense globally, is an example of pre-quantization.

For more exposition of this and the following example see also at fiber bundles in physics.

A variant of this example occupies particle physics these days. As we pass attention from electrons to quarks, these couple to the weak and strong nuclear force and this coupling is, similarly, locally described by a 1-form ##A_U##, but now with values in a Lie algebra ##\mathfrak{su}(n)##, from which the strength of the nuclear force field is encoded by the 2-form ##F|_U := d A_U + \tfrac{1}{2}[A_U \wedge A_U]##. For the consistency of the quantization of quarks, notably for the consistent global definition of Wilson loop observables, this local data must be lifted to an ##\mathrm{SU}(n)##-principal connection on a ##\mathrm{SU}(n)##-principal bundle over spacetime. The second Chern class of this bundle is quantized and is physically interpreted as the number of instantons. In the physics literature instantons are expressed via Chern-Simons 3-forms, mathematically these constitute the pre-quantization of the 4-form ##\mathrm{tr}(F \wedge F)## to a 2-gerbe with 2-connection, more on this in a little while.

The vacuum which we inhabit is filled with such instantons at a density of the order of one instanton per femtometer in every direction. (The precise quantitative theoretical predictions of this [Schaefer-Shuryak 96] suffer from an infrared regularization ambiguity [e.g. Witten 98], but computer lattice theory demonstrates the phenomenon [e.g. Gruber 13].)

This instanton sea that fills spacetime governs the mass of the ##\eta’##-particle [Witten 79, Veneziano 79, Schaefer 02], as well as other non-perturbative chromodynamical phenomena, such as the quark-gluon plasma seen in the experiment [Shuryak 01]. It is also at the heart of the standard hypothesis for the mechanism of primordial baryogenesis [Sakharov 67, ‘t Hooft 76, Riotto-Trodden 99], the fundamental explanation of a universe filled with matter.

Passing beyond experimentally observed physics, one finds that the qualitative structure of the standard model of particle physics coupled to gravity, namely the structure of Einstein-Maxwell-Yang-Mills-Dirac-Higgs theory, follows naturally if one assumes that the 1-dimensional worldline theories of particles such as electrons and quarks are, at very high energy, accompanied by higher dimensional worldvolume theories of fundamental objects called strings, membranes and generally ##p##-branes. While these are hypothetical as far as experimental physics goes, they are interesting examples of the mathematical formulation of field theory, and hence their study is part of mathematical physics, just as the study of the Ising model or ##\phi^4##-theory. These p-brane sigma-models are subject to a higher analog of the Lorentz force, and this is subject to a higher analog of the Dirac charge quantization condition, again a prequantum effect for the world volume theory.

For more on these super-##p##-branes see also the previous PF article Emergence from the Superpoint.

For instance, the strong CP-problem of the standard model of particle physics has several hypothetical solutions, one is the presence of particles called axions. The discrete shift symmetry (Peccei-Quinn symmetry) that characterizes these may naturally be explained as the result of ##\mathbb{R}/\mathbb{Z}##-brane charge quantization in the hypothetical case that axions are wrapped membranes [Svrcek-Witten 06, section 6].

More generally, ##p##-brane charges are not quantized in ordinary integral cohomology, but in generalized cohomology theories. For instance, 1-branes (strings) are by now well-known to carry charges whose quantization is in K-theory (see [Freed 00]). While the physical existence of fundamental strings remains hypothetical since the boundaries of strings are particles this does impact known physics, for instance on the quantization of phase spaces that are not symplectic but just Poisson [Nuiten 13].

These examples show that pre-quantum geometry is at the heart of the description of fundamental and effective physical reality.

The need for higher prequantum geometry

This question has no answer in traditional differential geometry. Therefore it is customary to consider this only after transgressing the ##(p+1)##-forms down to 1-forms by splitting spacetime/worldvolume as a product ##\Sigma = \Sigma_p \times [0,1]##
of ##p##-dimensional spatial slices with a time axis, and fiber integrating the ##(p+1)##-forms over ##\Sigma_p##.

But clearly, this space/time decomposition is a brutal step for relativistic field theories. It destroys their inherent symmetry and makes their analysis hard. In physics this is called the “non-covariant” description of field theory, referring to covariance under the application of diffeomorphisms.

We need prequantum geometry for spacetime local field theory where ##(p+1)##-forms may be prequantized by regarding them as connections on higher degree analogs of principal bundles. Where an ordinary principal bundle is a smooth manifold, hence a smooth set, with a certain extra structure, a higher principal bundle needs to be a smooth homotopy type.

The generalization of geometry to higher geometry, where sets — which may be thought of as homotopy 0-types — are generalized to homotopy ##p##-types for higher ##p## had been envisioned in [Grothendieck 83] and a precise general framework has eventually been obtained in [Lurie 09a]. This may be specialized to higher differential geometry [dcct], which is the context that I will be using here.

Once we are in a context of higher geometry where higher prequantum bundles exist, several other subtleties fall into place.

A well-kept secret of the traditional formulation of variational calculus on jet bundles is that it does not in fact allow to properly formulate global aspects of local gauge theory. Namely, the only way to make the fields of gauge theory be sections of a traditional field bundle is to fix the instanton number (Chern class) of the gauge field configuration. The gauge fields then are taken to be connections on that fixed bundle.  One finds that it is impossible to have a description of gauge fields as sections of a field bundle that is both local and respects the gauge principle. However, this is possible with a higher field bundle.

See at Higher field bundles for higher gauge fields for the exposition of this point.

Indeed, the natural choice of the field bundle for gauge fields has as typical fiber the smooth moduli stack of principal connections. Formulated this way, not only does the space of all field configurations then span all instanton sectors, but it also has the gauge transformations between gauge field configurations built into it. In fact, it is then the globalized (integrated) version of what in the physics literature is known as the (off-shell) BRST complex of gauge theory.

I’ll explain these things in more detail as we go along. Meanwhile, see also at the motivation for higher differential geometry.