In any school Physics course, the Newtonian equations of motion are very much a ‘stock’ item. Students learn the equations and are given a variety of problems that provide practice in determining which equation(s) to use to solve any particular problem. What is perhaps a little surprising is that in general no one applies the well-established mathematical technique of completing the square given the standard equation: ##s(t)=ut+\frac{at^2}{2}##. In this article, we will do just that and then apply the derived equations to solve some typical problems which arise.

The following diagram is a basic sketch for an initial (vertical) velocity of 10 m/s. Note that variable x being used (instead of t) is an artifact of the online graphing tool used. 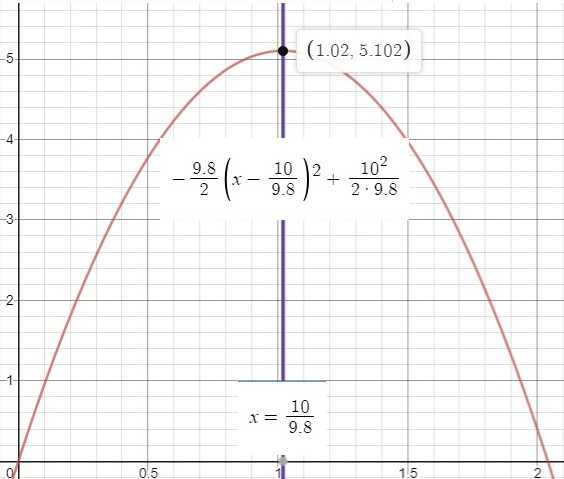 The time for which the projectile is in the air (before reaching ‘ground’ level again) and its maximum height are immediately apparent from the equation written in the above form.

The pedagogical drawback of writing the equation in the above form is that a well-versed science student will instinctively (and reasonably) wish to replace g with -9.8 whereas the negative has already been factored in per derivation above.   One could of course just leave variable a (acceleration) in place but in that case, one ends up with an equation which – at first glance anyway – has the appearance of a left-shifted, down-shifted parabola.

We should furthermore note that this equation is pertinent to what one might term the ‘classical’ projectile problem whereby an item is launched upwards (positive initial velocity) into the air. If the object is cast downwards then one is already on the right-hand side of the parabola in which case the axis of symmetry will have a  negative t value.

In this author’s experience, the solution of t  from the quadratic equation is rarely seen in practise. But seeing as we have the equation in completed square form above, it is relatively straightforward to determine a general solution: $$2gs=-g^2\left(t – \frac{u}{g}\right)^2+u^2=-(gt-u)^2+u^2$$ $$\Rightarrow gt-u=\pm\sqrt{u^2-2gs}$$ $$\Rightarrow t=\frac{u\pm\sqrt{u^2-2gs}}{g}$$Noting that ##\sqrt{u^2-2gs}## is equal to final projectile velocity v, we can write the solution in even simpler form: $$t=\frac{u\pm{v}}{g}$$ Now it should be apparent why t is rarely calculated using the quadratic formula – students rather calculate final velocity and then (essentially) employ the equation ##t=\frac{u \pm v}{g}##.

Once again if employing any of the above equations the reader (or student) must substitute g with a positive value since the negative has been factored in within the derivation of the completed square formula.

A crane is lifting a palette of bricks at a constant velocity of 1.8 m/s.  At 15 m above ground, one of the bricks slips off the palette. Determine:

Our 2D projectile motion worked examples are taken from a source that already provides “worked examples”! This is convenient because the reader will be able to compare solutions by conventional methods against solutions using the technique described in the preceding paragraphs. Our source is the Physics Course material  from the website “Lumen Learning” and the specific section from which the examples are taken is entitled “Projectile Motion”:

During a fireworks display, a shell is shot into the air with an initial speed of 70.0 m/s at an angle of 75.0º above the horizontal, as illustrated in Figure 3. The fuse is timed to ignite the shell just as it reaches its highest point above the ground. (a) Calculate the height at which the shell explodes. (b) How much time passed between the launch of the shell and the explosion? (c) What is the horizontal displacement of the shell when it explodes?

Kilauea in Hawaii is the world’s most continuously active volcano. Very active volcanoes characteristically eject red-hot rocks and lava rather than smoke and ash. Suppose a large rock is ejected from the volcano with a speed of 25.0 m/s and at an angle 35.0º above the horizontal, as shown in Figure 4. The rock strikes the side of the volcano at an altitude 20.0 m lower than its starting point. (a) Calculate the time it takes the rock to follow this path. (b) What are the magnitude and direction of the rock’s velocity at impact? 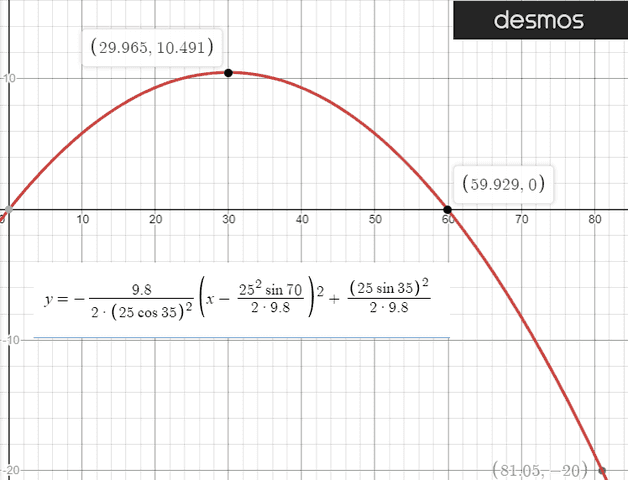 In this article, we have examined the standard equation of motion ##s(t)=ut+½at^2## by re-writing in standard turning point form. Although the resultant equation(s) might initially appear a little ‘ungainly’, they do make very apparent key parameters such as maximum height, time taken to reach maximum height, and (in the case of 2-dimensional motion) range of the projectile. From a teaching perspective, such an approach will also assist the student to better visualize projectile motion since he/she is made aware of the location of the parabola’s axis of symmetry and maximum point even if (in some examples) this will correspond to a negative t value.

I would like to thank PF advisors/users Charles Link, Berkeman, Dlgoff, jim mcnamara , vanhees71, and mfb who all took the time to respond to the “request for review” by looking through the article and commenting where appropriate. Hopefully as a result it is reasonably free of errors although I do need to add to the ‘thanks’ list PF user Richard R Richard who alerted me to an incorrect unit and incorrect order of solutions in one of the worked examples.

As always without Greg Bernhardt, there would be no PF and most of the ideas I have had for articles would have simply ended up gathering dust amidst well-thumbed textbooks (example below!), reams of past papers,  and other ‘detritus’ teachers collect over the years!

Frequently Made Errors in Mechanics: Springs