We are pleased to introduce you to Theoretical Physicist and PF Member Garrett Lisi.  Known for riding waves and developing a unique theory of everything. Read on! 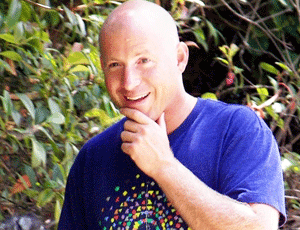 Tell us a little bit about growing up in San Diego

The part of San Diego where I grew up — Rancho Santa Fe — was pretty idyllic. I had a fairly normal, happy childhood. Although I was an introverted kid, and spent a lot of time reading, playing with legos, riding my bike around — and then a lot of time playing with and programming computers, after my father brought one home. It seemed like most of the best things I learned were outside of school, such as while playing games with friends. Then I went to Santa Barbara for boarding school, and academic life got more intense.

With so many waves to get your attention what drew you to physics?

Surfing is extremely fun, but it can’t be all one does. During high school I had the usual adolescent questions about what this universe is, and our part in it. My reading on this took me through a lot of philosophy, and then popular physics… where I learned that mathematics is the “secret” language underlying how our universe operates. I had always been good at math, so to find out that math is the key to understanding what the universe is, through physics… was fantastic, and I’ve been hooked on that ever since.

What is your best surf story/adventure? 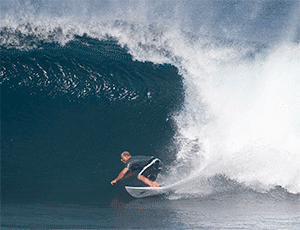 The one I’m on now! Living in Maui is pretty fantastic. The water is warm and beautiful, and we have lots of waves and wind — this place is a wonderful playground. And I especially enjoy having friends and other scientists out to visit, and introducing them to this place.

Has your pursuit of adventure sports influenced how you approach physics (vice-versa)?

I’m not sure, but I suspect going out and playing a lot allows me to have more mental flexibility when tackling hard problems. There are times when you hit a wall, working on a tough problem, and nothing you try works. By throwing yourself into a different intense experience for a couple hours, you’re able to come back and think about the problem with a fresh perspective and come up with a new approach that you might not have thought of if you had kept searching along previous lines.

How have you managed to stay productive in a competitive environment while maintaining a work/life balance?

It’s complicated. Playing outside, and spending time with people, and on other projects, keeps me happy enough that I can devote most of my intellectual energy and effort to working on physics — which is something that is also rewarding, but much much harder. There is also a certain amount of competition in physics, I suppose, but I don’t feel it very strongly. From my perspective, you have to understand, most other theoretical physicists are searching along the wrong paths. String theorists should have abandoned strings and supersymmetry and tried other models decades ago. And even within the LQG community, only a handful of people have thought about geometric descriptions of particles and the Standard Model. Every once in a while I see a blip on the radar — such as Chamseddine’s recent paper (http://arxiv.org/abs/1602.02295). But, you know, that’s the closest recent work to mine, and they’re at least ten years behind. I know that sounds arrogant. It’s also possible that I am completely wrong.

How did the publishing of the E8 Lie group change your professional life?

The E8 Lie group was discovered by Killing about 120 years ago… but I presume you mean the E8 Theory paper I put out in 2007? All the attention after that was a very mixed bag. I got invited to do bizarre and cool things, like heliskiing, and making a tv show — which were fun but distracting. And I got lots of criticism, including some rather mean-spirited attempts to discredit me and my work, from the likes of Motl and Distler, which was annoying, and professionally harmful. Since I’d been working largely on my own, along a research direction foreign to the rest of the community, I didn’t have much community support, and I think most physicists looked at the hype and criticism and figured my work couldn’t be any good. Maybe that will end up having been true — but I certainly don’t think so. My life now has been getting back to a more normal cycle of surfing and physics, which is how I like it. 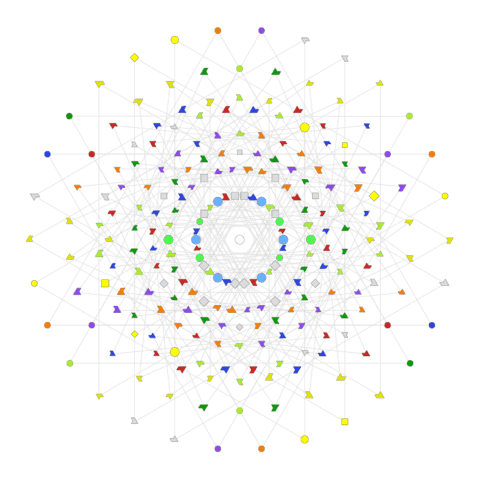 What is the current state of E8 Lie group and what are you working on at the moment?

The main discovery that I was very happy about, back in 2007, was that the mathematical structure of fermionic spinors could be described algebraically by E8 and other exceptional Lie algebras. A more recent discovery I’m excited about, which I described in the Lie Group Cosmology paper (http://arxiv.org/abs/1506.08073), is how to understand anti-commuting, fermionic degrees of freedom geometrically within this context. Basically, spacetime is embedded within a deforming Lie group, and the physical anti-commuting Grassmann fields are 1-form fields orthogonal to spacetime. With this missing piece, I now feel much better about the geometric description of Standard Model fermions. The main problem remaining is how triality works to relate the fermion generations and produce their masses. Towards this, for the past few months I’ve been working with the octonions and split-octonions as they relate to triality, which has been very fun.

If you could collaborate with 5 physicists dead or alive on E8 Lie group etc who would they be?

I have talked productively with several mathematicians, and a few other established physicists, but I think what I’d most like is to talk more with students and postdocs who are interested in the same research directions I am. The line of research I’m following — especially the geometric description of fermions — is very rich, and it’s been hard for me to follow up on all the interesting possibilities. Getting some younger eyes on the topic would probably be productive.

Tell us a little about your Science Hostel idea and if there are any plans for one?

More than plans! The Pacific Science Institute (http://www.pacificscienceinstitute.org) has been open and operating for a year now, with a steady stream of visiting scientists, students, and friends. We’ve had about 60 people come out to Maui, stay in our guest cabins, and enjoy the island and atmosphere here.

What physics research besides your own are you most interested in?

There’s been a ton of fantastic recent progress in experimental physics, as well as other branches of science. The most recent is the triumph of AlphaGo, which is a huge step forward for AI. And the use of CRISPR in bioengineering has amazing potential. And in physics, the detection of gravitational waves by LIGO was a great achievement. There’s also a lot going on in particle physics, with the LHC seeing an intriguing 750GeV bump, and a lot of important fundamental details coming to light about neutrinos.

What does the near/far future hold for Garrett Lisi?

Mostly more physics, surfing, and kitesurfing. I’ve also been very much enjoying my role here as Director of the Pacific Science Institute. It’s been great to have old and new friends come out to Maui, and I’ve enjoyed the conversations, and taking folks out to play around the island. I think I may do this for awhile. Perhaps branching out into other locations.

Lastly, what are some of your all time favorite books, movies, musicians etc?

To learn more about Garrett Lisi and his E8 Theory please visit his homepage here: http://sifter.org/~aglisi/

Read the next interview for Carlo Rovelli

The US Graduate School System For Physics Majors

How to Enter Physics Graduate School From Another Major

The Monographic Substitution Cipher: From Julius Caesar to the KGB
Scroll to top